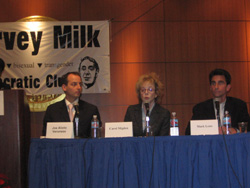 It’s often hard to assess which candidate “won” a debate, but a few basic conclusions can be drawn from the November 17th State Senate forum, hosted by the Harvey Milk LGBT Democratic Club: (1) State Assemblyman Mark Leno and Senator Carole Migden agree on most issues ideologically, (2) the third candidate, Joe Alioto Veronese, is more politically moderate, and (3) there is harsh acrimony between Leno and Migden – which has made the race far more divisive than it needs to be. Progressives have no one to blame but themselves if the race gets so nasty that Leno and Migden kill each other, though it is very unlikely that Veronese would eke out a victory under such circumstances. But Leno and Migden have a distinct difference in style, temperament and priorities – and that is where progressive voters deserve a clear choice in the June primary. As Veronese said at the debate, “we’re all here today because we have a contested race.”

A race between two prominent local gay politicians has already caused tension in the Milk Club. At the Club’s last general meeting, Carole Migden’s campaign overwhelmed the room with East Bay attorneys, Sacramento staffers and Willie Brown hacks – in an attempt to ram through an early endorsement schedule that rigged the system in her favor. Club President Brian Basinger alluded to this episode as he welcomed the crowd to the debate, and proudly rattled off the Club’s accomplishments in the past year. “Even in the middle of controversy,” he said, “work can still get done.”

Moderated by TV news anchor Belva Davis, the State Senate debate revealed an obvious point – there is little ideological difference between Mark Leno and Carole Migden. Both want to amend “Three Strikes” to avoid locking up non-violent offenders. Both want single-payer health care, but are pushing for incremental steps this year that could pass politically. Both want to raise revenue through split-roll property taxes, restoring the upper income tax bracket and allowing cities to reinstate the Vehicle License Fee. Progressives want to see a clear distinction before making a choice, but it’s just not there.

Migden tried to position herself to Leno’s left by attacking him on several votes. “I did not vote to expand prison systems like Mr. Leno did,” she said. “He also wrote a bill about rental cars that the Consumer’s Union is now suing.” But the prison bill in question (AB 900) was to add more beds and require rehabilitation services in existing facilities – a move Leno says the legislature had to take, or else the federal courts would have mandated building new prisons. As for the rental car bill (AB 2592), Migden voted for it – and according to Leno, the Consumer’s Union is not suing.

At one point, the two front-runners had a basic disagreement about whether Leno voted to sell EdFund – a corporation owned (but not run) by the state to manage financial aid money for students. Leno voted for SB 89 while Migden opposed it, but he disputes the notion that it was a vote to “sell” EdFund. After an audit raised questions about EdFund’s fiscal management, the legislature passed SB 89 to allow the option of finding another contractor. It certainly wasn’t to privatize education a la Don Fisher – which is what Migden’s accusation implied.

But while Leno and Migden nit-picked over who is more “progressive,” there was no doubt which candidate is the most “moderate” – Joe Alioto Veronese. The San Francisco Police Commissioner acknowledged his support of Proposition 83, a measure requiring former sex offenders to wear a tracking device that California voters passed last year. Prop 83 is currently tied up in court, but Veronese said he supports it “in concept.” Veronese also said he had “problems” with the health care bill being pursued in the legislature (which is already a compromise from single payer), because the Democrats, he said, “need to work” more with the Governor.

In fact, Veronese’s theme throughout the debate was the need to compromise with Schwarzenegger. “I’m not going to sit here and attack the Governor,” he said, as the other candidates eloquently criticized Arnold’s budget priorities. Throughout the debate, Veronese stressed the need to work with Republicans and Central Valley Democrats. Leno finally responded to him with a line that generated applause: “we have worked too much with the Governor. He needs to work with us.”

Some observers may surmise that with Veronese in the race, Leno and Migden will split the liberal vote – leaving the 3rd District with a State Senator who is far less progressive than his constituents. In 1998, when the 9th District in the East Bay had a State Senate election, Dion Aroner and Keith Carson split the progressive vote – which allowed moderate Don Perata to eke through. But Veronese is no Perata, who at the time was a well-known State Assemblyman and former County Supervisor. As a local Police Commissioner, Veronese will more likely play the “spoiler” role in this race – if even that.

Which brings us back to the two major candidates. As I explained last April, the real difference between Leno and Migden is how they approach representing a safe Democratic district – which is a distinction in their priorities, style and temperament. Migden is a hard-nosed pragmatist who spends time in Sacramento cutting deals and building political clout. Leno is a big-picture idealist who engages the grassroots to pressure the state government.

When asked about passing a gay marriage bill next year that Schwarzenegger twice vetoed, Leno said, “our strategy was based on a false premise: that the Governor is an honorable human being.” While this gave Leno the biggest applause line of the debate, Migden’s rebuttal showed her difference in tactics. “I’ve worked with the Governor,” she said, “and he doesn’t like being called names. I got him to get money for us to help transgenders. You have to work with people no matter who they are.”

Sparks flew when Leno was asked why he was challenging an incumbent State Senator. “This is an exercise in democracy,” said Leno, “not an assault on a 30-year career. Carole says that she should be unopposed, but this Senate seat doesn’t belong to her. It belongs to the voters.” Alluding to the fact that Migden has not had a contested race in 17 years, Leno added “Carole’s had the good fortune of having the waters parted for all the seats she’s run for. There’s never been accountability.”

This provoked a harsh response from Migden. “I know why [running is] a good idea for him,” she said. “He’s out of a job.” Migden reminded the crowd that she got Leno his first job in politics – when her election to the State Assembly allowed him to get appointed to the San Francisco Board of Supervisors. She said that Leno has a “personal animus” against her, because in 2002 she endorsed his rival, Harry Britt, for the State Assembly. Leno’s challenge, she implied, is about revenge.

Migden supporters have made this accusation ever since Leno first declared his candidacy – but even assuming that it’s true, will the average voter care?

Migden then brought up a point that, if persuasive, will have far more resonance in determining the outcome of this race: which candidate is a more effective legislator? “[Leno’s] been a little light on accomplishments,” said Migden. “Mr. Appropriations Chair has only had 3 bills signed into law this year.” In contrast, she said, 12 of her bills this year have become law.

Unmentioned was the role that State Senate President Don Perata has played in derailing Leno’s legislation. As Randy Shaw reported in September, six Leno bills that passed the Assembly in this session were stalled in the Senate – even if they enjoyed wide support. It’s a deeply cynical move by Perata (and presumably Migden) to deprive Leno of any accomplishments that he can tout while campaigning for the Senate seat.

If Leno defeats Migden, all incumbent State Senators could be subject to similar challenges – which explains Perata’s move to undercut Leno’s accomplishments. “In my first four years in the State Assembly,” said Leno, “about 13 out of 15 bills I wrote every year became law. Then, all of a sudden, my numbers went down. Guess what? Politics happens in Sacramento.”

When it came time to make closing statements, the tension was so palpable that Leno and Migden both wanted to go last. But the moderator made Leno go first, and he made the following statement about Migden: “I will not sing Don Fisher’s praises, I will not hold fundraisers at Clear Channel, and I will not declare marriage equality ‘dead for the year.’” In a classic game of “tit-for-tat,” Migden replied by making her own comments about Leno during her closing statement: “He says he won’t take money from Don Fisher, but he’ll take money from strip clubs that exploit women.”

With two top legislators running against each other, expect this race to get far nastier in the next few months. And with a statewide Proposition to abolish rent control on the same ballot, let’s hope the average voter won’t get so disgusted that they’ll just sit out the election. Because in the end, a race between two talented elected officials with similar politics should be a good thing – not a bad thing.

EDITOR’S NOTE: As a private citizen, Paul Hogarth is a member of the Harvey Milk Club and has endorsed Mark Leno for the State Senate – but does not play an advisory role in the campaign. A former Berkeley resident, he actively supported Dion Aroner’s 1998 run for the State Senate against Don Perata. Send feedback to paul@beyondchron.org