Mid-Year Budget Cuts: “For Whom the Bell Tolls?” 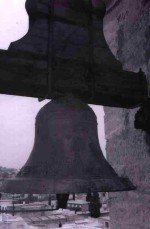 Morale at City Hall is grim these days, as everyone awaits Mayor Gavin Newsom’s announcement of mid-year budget cuts. Cuts that were supposed to come down on Friday … then Monday … then “in a couple days.” Cuts we all know are somehow inevitable in this economic climate, but the Mayor’s Office has few answers. All we get are grim projections of the City’s revenues that don’t even account for inevitable cuts coming from the state level. Even members of the Board of Supervisors are mostly in the dark; while the Mayor’s Office says they’re “consulting” them, their method sounds more like Newsom’s famous Town Hall lectures that he used to wage. The Mayor’s much-ballyhooed “State of the City” address – all 7½ hours of it broadcast on YouTube – barely mentions the budget deficit at all, besides vague assertions that “we’re there for those most in need” in the “next budget cycle.” While the Mayor stalls on mid-year budget cut announcements, his office sends out press releases announcing that San Francisco is ready for the next tsunami. In the absence of such leadership, the Board of Supervisors should start voting on de-appropriating parts of the budget – or else we just keep waiting …

Everyone knows we’re in a budget crisis, and some mid-year cuts before the end of the fiscal year are inevitable. But as Randy Shaw explained last week, a political strategy to fight proposed health cuts to the poor requires transparency in the process. That means “revealing exactly how many managers are in each [City] department, how many people these managers directly supervise, what these positions actually do, and the salaries for these positions. I don’t see how we can have a meaningful debate on city budget priorities without this information.”

And so far, there hasn’t been much transparency. The SF Chronicle openly talks about lay-offs in various departments; but besides specific cuts at the Health Department (which the Health Commission is reluctant to support), we haven’t heard anything from the Mayor’s Office. When I first heard cuts would be announced on Friday, I presumed Newsom would e-mail a press release at around 5:30 p.m. – which he is wont to do when annoucning bad news. Instead, we had a 2:00 p.m. “briefing to community organizations” on Friday by the Mayor’s Budget Office that simply announced the City is running out of money.

I figured we’d get more details about actual budget cuts after the weekend … so when I heard yesterday about a “budget briefing” at 10:00 a.m., I rushed to City Hall. The briefing in question – given to “neighborhood organizations” – had the very same handout about the budget crisis that was passed out on Friday, which didn’t say anything we don’t already know. The city has had a dramatic shortfall in transfer tax revenue, a higher unemployment rate is making the payroll tax stagnant and the hotel tax revenue is plummeting. The City has a projected deficit of $500 million for the next fiscal year, with only $1.2 billion in discretionary spending.

With word of impending layoffs and “mid-year cuts” scheduled to happen soon, what people really want to know from the Mayor’s Budget Office are specific cuts. At yesterday’s briefing for neighborhood groups, we were told the cuts would be announced in a couple days. We were also asked for “input”; but with a $6 billion budget, that’s a bit like shooting in the dark. One exasperated attendee finally said it didn’t make sense to give “meaningful input” without knowing what budget cuts the Mayor’s Office exactly had in mind.

Further lacking in the City budget briefing was that it didn’t include cuts at the state level – because the extent of such cuts are still unknown. But anyone watching the ridiculous charade going on in Sacramento knows it’s going to be painful. We have a Governor who wants to gut all state funding for public transportation. We have a Republican minority in the legislature that won’t pass any tax increase whatsoever, and can hold our state hostage because of the two-thirds requirement. California may be a blue state, but Sacramento politics has given us an Alabama budget (although that may be unfair to Alabama), whose effects trickle down to the local level.

And the Board of Supervisors? We were told at yesterday’s budget briefing that they are being “consulted” – and they will have the opportunity to hold hearings on mid-year cuts. All this depends, of course, on how one describes “consulting.” Board President Aaron Peskin tells me he got the same macro-presentation from the Mayor’s Chief of Staff about our dire budget crisis that members of the public got – without any discussion about specific cuts being involved, and without information we didn’t already know. As opposed to a “meeting” one would hope to engage between two branches of government, it was more like another one of Mayor Newsom’s lectures.

Speaking of Newsom’s media-driven lectures, the Mayor has gotten a ton of political mileage and press attention for putting his entire 7½-hour “State of the City” address on YouTube. Now, with the City in dire financial straits and on the verge of making devastating cuts, it’s incredible to see how little time he devoted in the speech to it. All I could find (at the 34-minute mark of this clip), was the following vague platitude: “I want to make sure that whatever we do with our budget, that we’re there for those most in need.”

Newsom followed up by saying: “I know [helping those in need] is something more difficult to prove … it’s easier to assert … but it’s something in the next budget cycle that we’re absolutely committed to.” But actions speak louder than words. While the public waits for the Mayor’s mid-year cuts, his press office sent an announcement last night about a press conference today at Ocean Beach. Thanks to the Mayor’s cooperation with state and federal agencies, San Francisco is the most populous city in the United States to achieve “tsunami-ready recognition.” Which would be impressive … if the Mayor was upfront and engaged in the budget process.

Now is not the time to wait for whatever the Mayor slashes. While we’re all still waiting for the mid-year budget cut announcements, the Supervisors should submit their own de-appropriation proposals at today’s Board meeting. The Coalition to Save Public Health sent out some proposals last night that are a good starting point: (a) eliminate essential positions making more than $100,000 a year; (b) cut in half the City’s contribution to the Opera and Symphony; (c) cut the Mayor’s PR staff that has mushroomed during the Newsom years; (d) re-open negotiations with the Police and Fire unions that are due for 7% increases (while other city workers only get 3.75%.) The Board meets this afternoon …