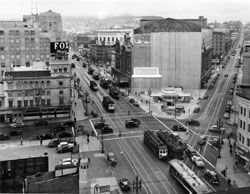 At last Thursday’s Planning Commission hearing of the Redevelopment Agency’s (SFRA) proposed Mid-Market Plan, SFRA proponents claimed fear-mongering on the part of progressives. In part the proponents are correct; we all know the history of SFRA’s destruction, and the potential and probability of continued destruction of affordable housing in Mid-Market looms as a cloud of doom.

But I came away from that hearing with another feeling that was just as overwhelming as the feeling of doom, and that is a feeling that we have reached a new level in the social justice struggle for affordable rental housing. I sensed a solidarity and strength among progressives, and I felt a defensive fight emanating from the proponents of SFRA.

More than 100 tenants and activists attended the hearing but not everyone had the opportunity to speak. Commissioner Sue Lee limited the testimony to 2 minutes per witness and sought a cut-off time of four hours.

The SFRA proponents have been planning their appearance for 10 years, but in two short weeks we rallied 45 tenants and progressive activists to speak from not only the Mid-Market area but from other neighborhoods as well. And as Randy Shaw pointed out last Friday, our movement — because it truly is a movement — will continue to grow and be more inclusive of San Franciscans from various neighborhoods not just from an organizational perspective, but because the working-class people of the city, the low-income residents, the seniors and disabled, people of color, are fighting back not from fear but from a perspective of moral indignation and outrage.

We’ve lived through three generations of Redevelopment and its sheer destruction of our communities, or we’ve heard the horror stories of Redevelopment’s attacks on the most vulnerable residents, and the time has arrived in the city where social justice activists from all over San Francisco are now working together as a unified force.

Richard Marquez from the Coalition to Take Back Mid-Market led the hearing by defining The Heart of the City:

“Mid-Market is a neighborhood … it’s a place where people live and labor…. It has beautiful buildings. People who live there like living there and want to stay there.”

Sam Dodge from the Coalition followed by noting that Mid-Market is already healing itself without SFRA intervention:

“Why are we even thinking about Redevelopment when its history in this city has been so dismal and so fraught with failure. It’s taken years for communities to recover from Redevelopment.”

And 7th-generation San Franciscan Laurie Hampton also stressed how the loss of The Fox Theatre has affected the area:

“Market Street has never recovered from the destruction of The Fox Theatre the Redevelopment Agency started.”

Prince Bush, speaking with passion on the history of SFRA, noted:

“There’s two words to describe the Redevelopment Commission and that is ‘notorious liars.'”

Gen Fujioka of the Asian Law Caucus confirmed SFRA’s history of racial targeting and urged the Planning Commission to listen to those most impacted:

“We urge the rejection of the present proposal because the proposal fails to address the potential or likely discriminatory impacts of this project. Before any project is approved for this neighborhood, the city has a moral and legal obligation to adopt policies that’ll avoid racial and ethnic discrimination.”

“The RDA, Redevelopment Agency, is the cancer on the City of San Francisco and the shame and scourge. History speaks for itself by saying that they have left nothing but a wake of destruction in its path in its entire existence…. I think the RDA should be abolished.”

“I do not trust any Redevelopment Agency or any other carpetbaggers…. And this is a class issue. The lines are really clear here … people’s lives should be improved but I don’t believe this is the way.”

“It appalls and disgusts me the way ‘artists’ are used as Trojan horses by the gentrifiers and wreckers and doubly appalling how some … roll over and play dead (or actively collude) for a crumb or two.”

Finally, Paul Hogarth, formerly head of the Berkeley Rent Board and now an active San Franciscan, passionately reminded the Commissioners to follow their hearts:

“Look at the Redevelopment Agency’s track record over the past 50 years. It is a depressing and insulting legacy of devastation. People who have been displaced out of the Fillmore, out of Yerba Buena Gardens: where did they move to if they weren’t moved out of the city? A lot of them moved to the Tenderloin and the Mid-Market. And it’s insulting to suggest now, with the Redevelopment Agency’s legacy, that you’re going to go and kick them out of that neighborhood, too!

Last week, the U.S. Supreme Court ruled 5-4 that governments have the right to seize any property under eminent domain and turn the property over to a developer if the action serves the public good. In her dissenting opinion, Justice Sandra Day O’Connor wrote: “Nothing is to prevent the state from replacing any Motel 6 with a Ritz-Carlton, any home with a shopping mall, or any farm with a factory.”

That decision means SFRA is empowered to act against any property owner. Perhaps your neighbor doesn’t like the color of paint on your home and complains that it makes the neighborhood look blighted. Indeed, if your house, or apartment building, hasn’t been recently painted it could be declared blighted and SFRA can seize the property paying what the Agency feels is fair value.

Such power cannot be allowed to continue to be vested in an unaccountable agency.

On Monday the Board of Supervisors heard SFRA’s request for $118-million for its 2005-06 budget, of which $17-million alone is assigned to staff salaries.

It’s time to permanently shut down the Redevelopment Agency and send its employees packing and looking for new jobs elsewhere. It’s time to take that $118-million and form an affordable housing fund administered by the people who are directly affected, members of the community where affordable rental housing is needed the most.