by Jeremy Nelson, Transportation for a Livable City on May 11, 2005 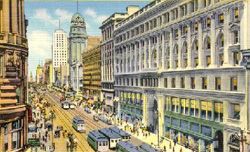 The unique circumstances of the Mid-Market neighborhood call for a plan that builds upon the neighborhood’s assets, enhances its livability and its contribution to the character of the city, and is sensitive to the citywide importance of the neighborhood’s existing and proposed pedestrian, public transit, and bicycle routes and the public investment made in that infrastructure. Unfortunately, the current Mid-Market Plan endangers the public safety and public health of residents and visitors, compromises the efficiency and safety of the City’s transportation system, and makes it more difficult if not impossible to implement multimodal transportation improvements.

Consider the neighborhood’s existing character and its citywide importance. The Mid-Market neighborhood is one of the most transit-rich neighborhoods in San Francisco. BART, Muni Metro, Muni bus, and Golden Gate Transit and SamTrans regional bus lines converge in Mid-Market, giving it some of the best public transit access in the country. Market Street is the most important transit streets in the city, and Mission Street is also a significant transit street. Market Street is the most-used street in the city’s bicycle network.

Market Street was designed as an important public promenade, and while it is not living up to its potential as a great walking street, new development should enhance its pedestrian character. The neighborhood also includes two of the city’s main public plazas, UN Plaza and Hallidie Plaza, which should be central to Mid-Market revitalization.

In addition, Mid-Market and surrounding neighborhoods have some of the lowest rates of car ownership in the City, but some of the highest rates of injury and death by automobile (see attached map). Keep in mind that 28% of all San Francisco households, 38% of all renter households citywide- and upwards of 90% of Mid-Market households in some census tracts – don’t own a car.

Transportation for Livable City is opposed to the current auto-centric plan being imposed on one of the most transit accessible neighborhoods in our supposedly transit-first city. As the MTA struggles with ongoing an ongoing structural deficit in their budget, they should be advocating for transit-first land use plans that help reduce transit delaying auto traffic and thereby the cost of running bus service, rather than their counterproductive approach of increasing fares and cutting service. For these reasons, we believe that if the Planning and Redevelopment Commissions don’t revise the plan to reflect San Franciscan’s progressive environmental and transportation values, the Board of Supervisors should.

Regarding the specific proposals in the Mid-Market Plan:

* We oppose allowing residential parking per dwelling unit (1:1) in an area that contains some of the most important transit, bike, and pedestrian corridors in the City. Planning and Redevelopment should not allow the same excessive parking ratios in the most transit-rich neighborhood in the City (if not in western North America) as they would in San Francisco neighborhoods with poorer transit access. Planning and Redevelopment should not allow more parking than the current code allows by right (.375:1, approximately 1 space for every 3 units) and should not allow more than 1 parking space for every two units (.5:1) with Conditional Use authorization. Rather than allow 100% automobility to be hardwired into every new building in this area, Planning and Redevelopment should require any additional parking (above 0.5:1) to be provided off-site in the neighborhood’s existing parking lots or garages.

* We oppose the inclusion of yet another short-term parking garage in the area as called for in the current Plan. The Mid-Market study area currently has 8,000 parking spaces in 25 lots and garages (including publicly-subsidized 5th & Mission and Civic Center garages) as well as a pending 320-space garage at 1160 Mission. Three separate studies- an environmental impact report, a Planning Department study, and TLC’s own survey have shown there’s no need for additional parking in this transit-rich area in either the short-or mid-range planning horizon. Planning and Redevelopment should eliminate the call for another short-term parking garage from the Draft Plan.

* Finally, we oppose requiring only the bare minimum for housing affordability levels in this area. We believe that the City’s most transit-accessible sites should be reserved for higher levels of affordable housing than the City-wide minimums in order to provide more housing near transit for low-income households with the fewest transportation choices. We therefore urge Planning and Redevelopment to require at least triple the inclusionary affordable housing level above what is required in the rest of the City.

To be clear, TLC supports a revitalized Mid-Market neighborhood with a vibrant, inviting, and safe public realm for all people, a thriving arts and cultural district for all income levels, and an increase in housing density, diversity, and affordability without displacement of existing residents. We also support providing appropriate development incentives and subsidies in order to encourage development projects of the highest quality that are tailored to the unique strengths of the Mid-Market and surrounding neighborhoods and that further the City’s long-term policy goals.

Furthermore, we believe the Draft Mid-Market Plan and new zoning controls includes many good policy goals and development controls that represent best practice land use and transportation policies, and we applaud both the PAC’s and the City’s tremendous investment of time and expertise in crafting the current proposals. However, as described above, we can’t support many of the proposed policy goals and development related to transportation, automobile parking, and pedestrian-friendly urban design.

This is because every parking space functions like a little factory. The product these factories manufacture are additional auto trips, and each of these auto trips provides no benefit, and in fact causes substantial harm, to our constituency of pedestrians, bicyclists, transit riders, CarShare users, and car-free households.

Residents of Mid-Market and surrounding neighborhoods need less car traffic, safer streets, and more housing for people, not for cars.