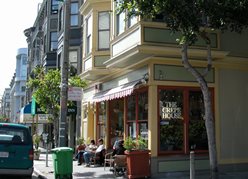 (Note: Please join Beyond Chron Editor Randy Shaw tonight at 7pm at Books, Inc. in Opera Plaza for a lively discussion of activism, politics, and his new book, The Activist’s Handbook, 2nd ed.)

Anyone walking down San Francisco’s Mid-Market Street would be surprised to hear that, according to the SF Chronicle, the area’s alleged “cleanup” has shifted homeless people to adjacent neighborhoods. The homeless problem on Market Street and adjacent blocks on Turk and Golden Gate is as bad as ever, leaving recently arrived businesses disappointed by the lack of progress. The increasing presence of homeless people in Hayes Valley, Civic Center Plaza and the Tenderloin (the latter was curiously omitted from the Chronicle story) is not caused by any Mid-Market “cleanup” but instead speaks to the city revisiting its homeless outreach strategies in response to growing homelessness across the nation.

Whenever I read stories about the “gentrification” of Mid-Market, or its “sweeping away” of homeless people, I wonder whether the reporter has been to the area. There are likely more people walking down the street with serious mental health problems in Mid-Market than any other part of the city, and many are homeless.

Hayes Valley offers a night and day difference from Mid-Market. While I do not dispute people’s claims that there are “more homeless people congregating in the park at Hayes and Octavia,” I do challenge the notion that this is due to their shifting to the area from Mid-Market, where homeless persons remain large in number and widely visible.

If we’re talking about increasing police and outreach services to address homelessness, prosperous Hayes Valley would go toward the back of the line. Nobody would dispute that its public safety and business climate is significantly better than that of Mid-Market and the Tenderloin, where outreach and police staffing are in short supply.

And while I’m glad that Chief Suhr said in the Chronicle article that he planned to add officers to the under served Mid-Market area (which hopefully includes the adjacent Tenderloin triangle blocks), these officers are best used to reduce drug dealing.

In contrast, reducing public homelessness is not primarily a police issue.

Why Are People On the Streets?

We spend surprisingly little time discussing this question. It’s far easier to blame politicians for not “solving” homelessness than to examine why people are on the streets in the first place.

Most are on the streets because they cannot afford housing or are unable to access shelters. A small minority has income but prefers not to pay rent, or has no income and does not want to stay in shelters.

They can particularly help get the first group off the streets. The small minority who want to sleep and live outside are another matter, and this is the group whose violation of city and state laws (anti-camping, stolen shopping carts etc) ends up involving the police.

So a smart homeless outreach strategy prioritizes outreach workers over far more costly and less productive police. San Francisco needs to do this in Mid-Market, the Tenderloin, and in other neighborhoods where homelessness is a problem.

I almost never see a homeless outreach worker in the Tenderloin, which lacks privately funded ambassadors. People in desperate need of assistance remain sprawled out on sidewalks until someone contacts the police.

Thanks to the Central Market CBD, Mid-Market has ambassadors who perform some of the key tasks of homeless outreach workers. The Civic Center CBD also has these ambassadors, and they make a difference; I have not perceived the reported major increase in Civic Center Park homelessness that was noted in the Chronicle story (it could be that I compare it to far worse days, whereas others compare the Park to last year).

We need police in Mid-Market to stop drug dealers from operating openly at Jones and Market (where a high-profile shooting occurred late last year) and on both sides of the first block of Turk (far and away the most dealer-heavy block of San Francisco). We don’t need police to get homeless people off the streets, which should be outreach workers’ job.

It used to be that increased homelessness along Polk, in downtown, and in the Tenderloin was blamed on police “cleanups” of Union Square or Fisherman’s Wharf. But the alleged “cleanup” of these areas was as illusory as that now claimed for Mid-Market.

By Improving and expanding homeless outreach, we will reduce homeless people in every neighborhood. And that, rather than pitting communities against each other or making believe Mid-Market has been “cleaned up,” should be San Francisco’s approach.