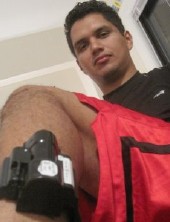 I learned the hard way that Immigration and Customs Enforcement (ICE) field offices are actually becoming even more ruthless than before. Now that the electronic shackle is off, it’s really nice not having to listen to the eerie computer-voice commands regularly broadcast from its plastic speaker.

For 10 miserable days, I had to wear a thick rubber and plastic cuff around my ankle for 24/7 GPS monitoring. Every few hours, it would bark out strange comments and commands until I pressed a button to make it stop. Some were clear: “Call your officer.” “Recharge the battery.” But it also would sometimes declare “Leaving your master inclusion zone.”

What does that even mean? Beats me. But then, the fact that I had been shackled by an employee of a private company with a lucrative Department of Homeland Security contract made no sense either.

On the other hand, now I get what it really means to experience abusive government intrusion into your life. And I know firsthand that the Obama administration isn’t yet upholding its pledge to exercise some common sense when it comes to deciding whether a specific deportation case is a priority.

Under a new policy instituted in August, immigration agents and judges are supposed to use more discretion when deciding whether to deport someone. They’re supposed to weigh such factors as how long the person has lived in the United States, as well as whether he or she has obtained or is pursuing a college degree, or has dependents who are citizens. This new directive was supposed to free the government to focus on deporting people deemed to be criminals or national security threats.

As a college-educated, 25-year-old undocumented immigrant with an active deportation case and no criminal record, I welcomed this change — until I learned the hard way that Immigration and Customs Enforcement (ICE) field offices are actually becoming even more ruthless than before.

On September 13, less than a month after President Barack Obama announced this new initiative, and a dozen years after I arrived in the United States, I was placed on a supervision-intensive program run by a private company called BI Inc.

Under this program, a BI goon shackled me with a GPS-enabled monitoring device on my ankle that I’d have to wear at all times, even in the shower. Another called me a week later, telling me I should buy a plane ticket in two weeks. BI agents were free to make unannounced visits to my home, and my girlfriend and I had no right to refuse them entry. Nor was I allowed to leave the Washington, DC area.

Thanks to a petition drive by friends, colleagues, and supporters, ICE eventually relented and had the shackle removed. But thousands of other undocumented immigrants aren’t so lucky.

The experience was shocking and upsetting. But as a veteran immigrant rights activist living in our nation’s capital, I was no stranger to the facts about the massive and inhumane deportation system that has defined the Obama years when it comes to immigration policy. More than a million people have been shipped out over the last three years, putting the Obama administration on track to potentially deport more people in one term than Bush administration did in two.

I am an undocumented American. I came to this country with my parents at the age of 13, and after a dozen years of legal limbo, my attachment to this country is undeniable. I learned English as a teenager reading Catcher in the Rye, watching World Wrestling Entertainment, and enjoying Top 40 hits. But to the government contractor that suddenly became charged with my case, I was apparently just fodder for a profiteering scheme.

When Obama addressed Latino voters at the National Council of La Raza in July, he said he needed a “dance partner” to fix the nation’s immigration failures and that he couldn’t act alone. The new policy, announced in a letter from DHS Secretary Janet Napolitano to Sen. Dick Durbin, seemed to be playing a more danceable tune.

After my ordeal, I have some advice for Obama. One thing he could do to show that he wants the nation’s largest minority group to embrace him is to cancel the Bush-era contracts with unethical and profiteering companies like BI. Then he should tell immigration authorities to actually follow his new, common-sense approach.

Matias Ramos is the 2011 Carol Jean and Edward F. Newman Fellow at the Institute for Policy Studies. He works in the Institute’s communications department, identifying and maximizing opportunities to build online audiences. Prior to joining IPS, Matias had fellowships at the UCLA Center for Labor Research and Education and the National Immigration Law Center. In addition, he is a co-founder of United We Dream, a national immigrant youth advocacy network. He studied Political Science at UCLA, where he was involved in the publication of “Underground Undergrads: UCLA Undocumented Immigrant Students Speak Out.” This piece was first published at Common Dreams.