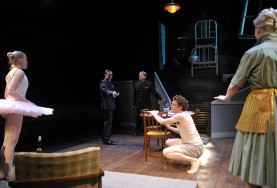 NOTHING SHORT OF A TRIUMPH

METAMORPHOSIS in the hands of the Aurora Theatre in Berkeley is as beautiful to look at, as it is chilling to watch. First off, the challenging set starts you off on a strange journey. And, believe me – the experience is something that you will never forget.

There is the overly sweet, always smiling family. And there is a handsome son that is the workhorse in the house. He brings in the bread, so to speak. But, something goes wrong.

One day the young man does not come out of his room to go to work. The overly sweet Mom and Dad and Daughter become distraught. They need the money. But the boy won’t come out of his room. And when he does – what they see is not a handsome lad – but a big insect. Yes, the Son has morphed into an ugly insect. Of course, the family is horrified. The pasted on smiles no longer are there. What to do? They can’t ask him to sit at the table and have dinner with them. They tried that – and it just didn’t work.

The play (based on the Novella by Franz Kafka) could maybe be based on Kafka’s own life. In the novella, the insect dies of starvation. Kafka also died of starvation. The Aurora production is so amazing. One minute you are laughing and the next moment you recoil in fear. All of this, is accompanied by a unique soundtrack (by Matthew Stines.)

What starts out as an ordinary family – turns into a horror story with underlying humor. There is also the feeling throughout of chilling eroticism. The young man, before he becomes the insect evokes sex as he romps around in his boxer shorts (which he almost lost). His sister – try’s to seduce a very Germanic man, as she dances around him, in her ballerina outfit. Yep, this is a cartful of nuts on the verge of everyone turning into an insect.

The production is very powerful with the guidance of Director Mark Jackson, who made this an exceptional visual, masterpiece marvel. His imagination is indisputable!

Alexander Crowther is the young man that turns into an insect. He not only gives us a bone-chilling performance – but he also is a physical actor. Plus, he acts the hell out of the part – but he must also do a high wire act. Crowther is absolutely mesmerizing. Megan Trout (the sister) dances for house guest Patrick Jones (Mr. Fischer). Trout is an odd blend of grace, grit and sensuality. “Ground breaking” acting! The Mother (Madeline H.D. Brown) is very goody — two shoes. She wears a smile like a mask. The mask gives way to sourness as their world begins to fall apart (Magnificent). The Father — is a typical hard-nosed Dad. Like most Dads are. He’s a good and wonderful stage actor. And last, but not least is the marvelous performance by Patrick Jones (Stietl, Fischer). His German accent is right on target as he struts around like Hitler has already called him up. You know what? If it were up to me – each and every one of the Actors would get Academy Awards. They are that good. No, make that GREAT!

At The Aurora Theatre – Berkeley stage