Merchants, Misinformation, and the Future of San Francisco Transit 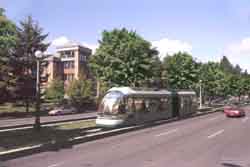 Anyone who’s ever tried to use public transit to get to and from the Richmond knows what they face – busses that don’t come on time, run slow, and remain consistently overcrowded. To attack the problem, the San Francisco Transportation Authority recently initiated a study that takes a cue from some of the best transit systems in the world. Bus Rapid Transit (BRT), which designates a lane for buses, improves bus stops, and speeds the whole system up, is currently being considered for the Geary corridor. Yet early in this study, BRT has met vehement opposition from a small group of merchants who’ve launched a misinformation campaign to halt the plan in its tracks. Unfortunately, these merchants aren’t acting in the best interest of the people they claim to represent.

From South America to Australia, BRT has become one of the more exciting ways cities are improving transit for their citizens. BRT uses platforms so passengers can quickly board, ticket sales at these platforms, general streetscape improvements, and designated bus lanes to increase both speed and reliability, as well as spruce up the neighborhoods where BRT is implemented.

The cost of it all represents perhaps the most promising aspect of BRT. Compared to more substantial improvements, like digging subways, BRT costs far less while offering similar benefits.

There’s a myriad of reasons why both San Francisco and the Richmond would want to see Geary BRT enacted. The variety of streetscape improvements, including more trees and a better environment for pedestrians, would not only make the neighborhood better for residents – it could also bring a major boon to merchants in the area.

By making Geary a more pleasant place to spend time, the street could become a destination place for city shoppers. And by making it easier to get to and from the Richmond, the potential shoppers would be more willing to make the trek out to Geary.

Of the more than 50,000 people who already use the Geary bus line daily, many of them are commuting to and from work. While service on Geary can be spotty, the hassle of dealing with traffic and parking downtown leads many Richmond residents to turn to the bus. By increasing the speed and reliability of this bus route, commuters could be more sure of arriving to work on time, and of getting there a lot faster.

San Franciscans have already come out in support of projects like BRT. In 2003, in fact, the voters passed Proposition K, which created an additional half-cent sales tax devoted to transportation improvements. Passed overwhelmingly by more than 70 percent of voters, the measure specifically stated it would help fund major transit projects like Geary BRT.

Unfortunately, however, a small group of merchants that could potentially be major benefactors of Geary BRT have launched a campaign to kill it. Led by David Heller, president of the Geary Boulevard Merchants and Property Owners Association, opponents created an anti-BRT website and unleash a constant stream of vitriol in the Richmond’s neighborhood paper, the Richmond Review.

Heller apparently decided early on that Geary BRT would destroy the Richmond due to what he believed would be intrusive construction and massive loss of parking spaces. But rather than keeping an open mind and researching the issue, he immediately went on the offensive.

This misguided effort has relied almost entirely on misinformation and hyperbole to frighten Richmond businesses and residents. Here’s a quick breakdown of myths being forwarded by Heller compared to the facts.

Myth: Geary BRT will eliminate ‘thousands’ of parking spaces. Heller made this claim in a recent screed against the BRT proposal. However, the study has come up with a slew of ways to prevent the loss of parking spaces. Using a variety of possible mitigations, Geary BRT could do anything from increase the number of spaces in the neighborhood by 165, to eliminating a maximum of 185 spaces.

Myth: Muni ‘wants to rip up Geary Boulevard with no regard to the effect a major construction project will have on neighborhood businesses.’ Constructing a BRT line involves about the same level of intrusion as resurfacing the streets and altering curbs. Not only that, but the study has analyzed a variety of ways to limit the effect of construction on the neighborhood, and has come up with one plan that would construct Geary BRT in a series of quickly completed small chunks, ensuring no businesses have to endure hardship for too long.

Myth: BRT will eliminate ‘half the street capacity’ on Geary Boulevard, creating far more traffic. Every proposal being discussed right now for Geary BRT would only utilize 2 of the current 6 lanes on the street. That’s one third, not one half. When factoring in the traffic that the current 38-line buses cause with their constant starts and stops in a lane of traffic, as well as the reduced car trips triggered by BRT providing a more attractive transportation choice, the traffic impacts should be minimal.

Myth: Geary BRT circumvents the will of the voters. Heller claims that voters didn’t know that the funds from Proposition K would go towards Geary BRT. If they had, they would have voted against it, he argues. Yet the summary of Prop. K that voters read specifically stated the money from the new sales tax would go towards “upgrades to the bus system, including new buses, stations and dedicated lanes.” 74 percent of San Francisco voters approved Prop. K.

Myth: Because of the Geary BRT study, ‘businesses are choosing not to renew leases, closing down and moving’ from the Richmond. Of all of Heller’s fear mongering, this represents perhaps his most blatant lie. The ratio of the amount of space available to the amount of space being leased on Geary has been rising for a while, and continues to rise, despite Heller’s claims to the contrary.

While a misinformation campaign is nothing new in San Francisco, it’s still unfortunate. In this case, the most unfortunate aspect of the campaign is that someone claiming to represent Geary Boulevard businesses and residents is acting directly counter to their best interests.

Hopefully, Richmond residents and merchants will see through Heller’s rhetoric and recognize Geary BRT as the dramatic improvement to their neighborhood – and the rest of San Francisco – that it is.