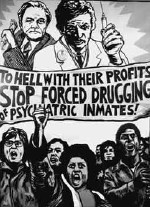 When James Jay Lee recently took hostages and was ultimately shot and killed at the Discovery Channel headquarters in Silver Spring, Maryland, many in the media immediately attempted to explain away the tragedy by stating that Lee was likely suffering from paranoid schizophrenia. Instead of focusing on the years of abuse that Lee suffered — as well as his isolation from society rather than his illness being accepted and compassionately treated — this tragic incident fell back on the same sad myth that mental illness equals violence. This sort of flawed reasoning has played a large part in the renewed push by Supervisor Michela Alioto-Pier to have San Francisco adopt AB 1421, better known as Laura’s Law.

Laura’s Law was passed in California in 2002 and was named after Laura Wilcox, a young woman who was killed by Scott Harlan Thorpe, who had refused treatment for mental illness.

The law walks a dangerous path, as its implementation of “Assisted Outpatient Therapy” boils down to involuntary treatment of mental health clients. Though the law cannot force anyone to take medication without a court hearing, proponents of the law have argued for the “black robe effect” of a judge effectively coercing a mental health consumer into being hospitalized for treatment, which often consists of very strong and potentially harmful psychotropic drugs. Laura’s Law can only be enforced in counties that choose to enact a voluntary community outpatient program based on the measure. So far, only two counties, Los Angeles and Nevada County, have enacted the measure.

Many words have been spent on debating the efficacy and ethical impacts of the law, which has been pushed by family members of mental health consumers, as well as members of the national nonprofit, Treatment Advocacy Center, which has spent time traveling from county to county in California to push for the law’s adoption. The one group of people who haven’t been asked about their opinion are mental health clients themselves.

This shouldn’t come as a surprise, as people living with mental illness have long been treated as second class citizens and outsiders. Reverend Alex Goldenberg and Thomas Schwertscharf are two individuals who have dealt with mental illness first hand and have become passionate advocates for mental health consumers. They are also diametrically opposed to Laura’s Law, and they are both not surprised that the proponents of the law aren’t asking for their input.

“As a former consumer of the mental health system, my question is this: when is it appropriate for anyone to make these kinds of decisions for me?” Goldenberg said. Currently a healer who operates his own healing center, Embody Calm, in San Francisco, Goldenberg points out the pitfalls of such a law. “Being mentally ill doesn’t mean that I am dangerous. People in high positions with much more responsibility and power than I have are much more dangerous. Singling out mentally ill people as “dangerous” is discriminatory, stigmatizing, and completely preposterous.”

Goldenberg offers his own form of voluntary treatment at his center, which is focused around energy, herbs, and meditation, which has often resulted in complete remission of symptoms. There are numerous other voluntary strategies that should be employed prior to enforcing Laura’s Law. In fact, the law was passed prior to the passage of the landmark Mental Health Services Act in 2004, which has resulted in numerous innovative programs across the state. The mental health system, formerly a patchwork of programs and services, has now been integrated to a level unseen in past years and has negated the need for Laura’s Law.

Ultimately, involuntary treatment doesn’t work. Mental health treatment works best when treatment is done in full partnership with the consumer and the mental health professional. People with mental illnesses should have the same protections afforded any citizen in terms of their right to choose care. By forcing treatment on someone, all trust is shattered.

Thomas Schwertscharf, who has dealt with Bi-polar Disorder for over 30 years, has seen the dark side of treatment, having had a job offer rescinded after an employer discovered his hospitalization due to depression as well as having been subjected to institutional abuse both in hospitals and in the psychiatric community. “For supporters who are clamoring for just one more treatment tool to set everything right,” he says, “I would remind them that in the not too distant past, one more tool meant extended hospital stays without patient consent, overmedication, and electroconvulsive treatments.” Schwertscharf, who has been an advocate for voluntary treatment across California, added that Laura’s Law, unlike the Mental Health Services Act, was developed without the input or approval of mental health clients and that Laura’s Law potentially violates the very basic goal of treatment that mental health professionals “shall do no harm.”

Perhaps it’s time that we open up the dialogue to mental health consumers, the one group who has consistently been shut out of decision making about their own treatment. It’s a sad irony that needs to be addressed.

Michael Gause is the Director of Programs and Training with the Mental Health Association of San Francisco (MHA-SF). Alex Goldenberg and Thomas Schwertscharf are speakers with MHA-SF’s SOLVE Program and are committed to ending stigma in mental illness. Michael can be reached at michael@mha-sf.org or at (415) 421-2926, extension 304. For more information on Alex’s business, Embody Calm, visit http://www.embodycalm.com/