Memo to Young Voters: Do Me Proud! 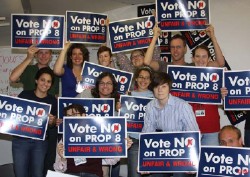 When I lived in Berkeley from 1996-2004, I spent many hours organizing the youth vote on campus—registering students on Sproul Plaza, getting classmates interested in local issues, and running for public office myself at age 22. It was an inspiring time, but also frustrating getting young people engaged. Now that Barack Obama has mobilized the youth vote, it’s a totally different era. And with the fate of Proposition 8 going down to the wire, young people hold the key to putting California on the right side of history. It’s still a question how black voters inspired by the historic nature of Obama’s campaign will vote on marriage equality, and the “No on 8” campaign should have done a better job early on telling them that Obama opposes Prop 8. But I’m not worried about young people voting against Prop 8—as the ones who voted in March 2000 decisively rejected Proposition 22. The only question now is if they’ll turn out in record numbers to defeat Prop 8. And with the youth vote getting more politically engaged, I’m cautiously optimistic it will happen.

By far my most depressing Election Day on campus was March 7, 2000—when I was a senior at UC Berkeley. The voter registration drive I directed on behalf of the ASUC had been billed a success (we turned in 4,227 registration forms to the County), but a lot of those were students who re-registered from Democrat to Republican so they could vote for John McCain. For the first time, the Daily Cal did not publish a precinct map of Berkeley in its Election Day issue—so students who wanted to vote were clueless about where to find their polling place. And it started to rain heavily around 3:00 p.m., which further depressed turnout. For the first time ever, I didn’t party on Election Night.

On that ballot was Proposition 22, the Knight Initiative that codified discrimination in the state’s marriage code, which passed with 61% of the vote. Proposition 21, the “Juvenile Justice” initiative that treated 14-year-olds as adults, passed by a similar margin. Voter turnout in the state was abysmal—as Republicans actually outnumbered Democrats among those who voted on Election Day. Exit polls showed young people strongly opposed Prop 22 (a glimmer of hope for future elections), but they weren’t enough to make a real difference. After all, the median age of voters in that election was fifty.

I’m far more optimistic this time around. While I’m still nervous about Prop 8 passing, I have faith that a surge of young voters could redeem what happened eight years ago. In the 2004 election, youth turnout was the highest since 1972—and they were the only age group that supported John Kerry. In the 2006 mid-term election, young voters once again hit historic highs—and were one of the main reasons why Democrats took back both houses of Congress. And, of course, young people were critical in this year’s Iowa caucus that eventually helped Barack Obama win the nomination.

Research has shown that if you get a young person to vote three elections in a row, they become habitual voters for life. We’ve all heard about “FDR Democrats” — those who came of age during the Great Depression, cast their first vote for Franklin Roosevelt and became life-long habitual Democratic voters that shaped American politics. After this election, we’ll be hearing a lot about “Obama Democrats” over the next 50 years. Here in California, that generation’s first legacy can be the defeat of Proposition 8 – and the long-term impact this would bring in the historic struggle for equality.

For much of this election, progressives were too complacent about Prop 8—lulled into a false sense of security by favorable poll results in September, and distracted by the Obama campaign effort in swing states. But once it became clear Obama was going to win, efforts have been re-directed towards California. The Prop 8 campaign has been effective at scaring voters into believing the worst lies about marriage equality, and now it’s time for the young people to set the record straight. We need the same enthusiasm on college campuses we saw for Obama in the primaries to translate into this battle.

Young people can put us on the right side of history. And I faith that they can do it.

EDITOR’S NOTE: Paul Hogarth attended UC Berkeley from 1996-2000, and was an active member of the Cal Berkeley Democrats. He was elected to the Berkeley Rent Board in 2000 at age 22, and served on that body until 2004.