Memo to Washington: We Are Not a Conservative Country 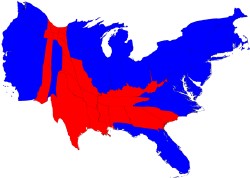 “We are a conservative country.” It’s a myth the corporate media repeats regardless of the facts. It’s the excuse progressives get – and too often give – when we don’t get what we want, or to excuse Democratic politicians for caving to right-wing blackmail. But if the health care fight this week in Washington abundantly proves, our political “leaders” are dangerously out of step with what the country has become. Democrats would never have won Congress in 2006 without public anger at the Iraq War, and Barack Obama would never have become President without a revulsion to the unmitigated disaster that was George W. Bush. But despite a public mandate, conservative “Democrats” conspire with Republicans to sink progressive hopes in Congress. If Democrats get their butts kicked in 2010, it won’t be because they were “too liberal” or pushed “too hard” for change. It will be because they failed to accomplish what they were elected to do.

With vicious attacks from the right wing cabal of Fox News, Sarah Palin, Teabaggers and racist “birthers” over the past few months, support for Obama’s health care plan has taken a hit – and Republicans have resolved to make the defeat “his Waterloo.” But the problem with asking voters if they favor or oppose the “health care plan” is that no one knows what that means – as details are changing every day. And few are being asked why they oppose reform.

One poll, however, did ask why – and the reasons are illuminating. What they found is a significant portion of Americans oppose the health care plan, not because they are against reform – but because it doesn’t go far enough. “This would help to explain,” said Nate Silver, “why polls show majorities (sometimes fairly sizable ones) in favor of the public option, but pluralities or majorities opposed to the overall plan.”

In that case, killing the public option – despite its persisent popularity – is a death wish for Democrats. Regardless of the final compromise we get – which no one mentions that would require 55 year old Medicare recipients to pay over $600/month in premiums – progressives are depressed, disillusioned, and disenchanted when we should be celebrating the moment we have been waiting for decades.

What more can liberal activists do to expand Democratic majorities before we actually start seeing results? Now, every fundraising solicitation I get from the DNC, the DSCC and the DCCC gets tossed. We gave you a working majority – what else do you want?

It wasn’t supposed to be that way. In two straight elections, voters elected Democrats to Congress – first taking over both houses, and then expanding their majorities. Obama became the first Democrat in 44 years to win Indiana and North Carolina. And the new Congress elected with Obama symbolized a progressive demographic realignment in this country – for the first time a “liberal majority” with a mandate to pass landmark historic legislation.

Who would have dreamed that Democrats would get a sixty-vote – allegedly “filibuster-proof” – majority in the U.S. Senate? Neither party has had such a wide majority in 32 years, which means this was the moment – if ever – for progressive reforms like health care, climate change, immigration and the Employee Free Choice Act to become law. Instead, Democrats like Ben Nelson, Joe Lieberman and Blanche Lincoln are working with Republicans to filibuster in the name of protecting insurance company profits.

Every time, progressives are told to sit down and shut up – because we’re a “conservative country.” Of course Blue Dog Democrats are going to oppose the public option – they’re the ones who represent districts where Teabaggers are mobbing Town Halls. We should be “grateful” they’re doing what they can to get re-elected – or we wouldn’t have House Speaker Nancy Pelosi. However, this rests on a faulty premise that has been debunked.

Over the past few months, Daily Kos has commissioned polls from a reputable firm (Research 2000) to query the constituents of these conservative Democrats – asking them about health care reform. Repeatedly, the Blue Dogs were exposed as frauds – hiding behind the excuse of their “conservative” districts, who we proved support the public option. Senator Mary Landrieu even argued with a straight face against the public option – because it would be “unfair competition” to private insurance companies. Do Louisiana voters care about the plight of Aetna?

The media plays a dangerous role promoting this myth. In 1994, after Republicans took control of Congress, Time Magazine had a special report of the “GOP Stampede” – with an elephant on the front cover crushing a donkey. In 2006, when Democrats took back Congress, the front cover had a red and blue circle overlapping each other – with the headline “Why the Center is the New Place to Be.” You can read more about this biased coverage here.

In October 2008, on the eve of Obama’s historic victory, Newsweek inexplicably had a cover story trumpeting America as a “center-right country.” Other “non-partisan” media outlets did the same – regardless of the facts. It was one thing for Bill O’Reilly to say: “America is still a center right country, even though the folks voted left last night.” But when Time and Newsweek repeat the same lie, a false perception is accepted as reality.

“Can we have a new Senate for Christmas,” asked blogger Joan McCarter yesterday at Daily Kos. “This one is broken.” It’s time for politicians to stop hiding behind an inaccurate, outdated and dishonest view of America. We are not conservative!