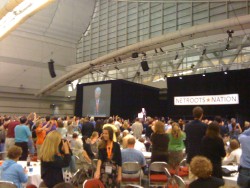 After proving their mettle in the 2006 and 2008 election cycles, I never thought I would see liberal bloggers at Netroots Nation buy into the notion that 2010 is going to be a bad year for progressives. “You guys have had a great run,” said veteran pollster Charlie Cook – who is as conventional of a Washington D.C. pundit you can get. But even progressive blogosphere polling superstar Nate Silver of FiveThirtyEight said at a panel yesterday that there was an 80% chance Democrats would lose seats in Congress next year. Polling over the past six months that has shown Barack Obama’s popularity dip (but is still above 50%), along with growing impatience over health care reform, has turned many progressive bloggers at this Convention into “nervous nellies.” But such concern overlooks the demographic changes that are going on into this country, and how most observers – including former President Bill Clinton – see that America is on the verge of a new progressive era. A lot can happen between now and next year that could shape the future of progressives, but bloggers cannot let a few polls discourage them. Past organizing proves they can shape the future, and there will be too much at stake next year.

A well-attended panel of experts on how to read polling data yesterday was informative about the “nuts and bolts” of reading polls, but even there it appeared to fall into the trap. Any cumulative analysis of poll data over the last six months shows that Obama and the Democrats have taken a hit in popularity, and the conventional wisdom spouted at the panel predicted 2010 would be bad. “The party controlling the White House has only gained seats in Congress three times since the Civil War,” said one pollster – ignoring the fact that two of those were in the past decade (1998 and 2002.) It struck me as alarmist.

There’s always something to be said about lowering expectations – and how activists must remain vigilant and take nothing for granted. But what I’ve seen at the Convention so far is bloggers who are getting too caught up in the momentary polls that show fairly mild swings – when it’s fair to conclude that progressives have the wind at their backs.

Not everyone is so pessimistic. “We are on the verge of a new progressive era,” said Chris Hayes of The Nation at an afternoon panel on the FDR legacy – which highlighted that the New Deal mentality saw big problems and sought big solutions. Now is the time to propose sweeping changes, not the increment approach. As one blogger said at the FDR panel, “Obama shouldn’t be just trying to bring back the ‘90s.”

And there is reason to be optimistic. Studies show if you get a young voter to vote in three straight elections, you make them voters for life. The last three elections (2004, 2006 and 2008) have seen the highest youth turnout in decades, and they have voted in Democratic by wide margins. The country’s growing Latino population is also voting more Democratic, which is why Obama won Nevada and Colorado last November. In fact, polls have shown Latino approval of the Republican Party in the single digits.

Ironically, the one person who seemed to get it at the Conference yesterday was Bill Clinton – who offered the Keynote Address. Liberals have had reason to dislike him for years, as the last Democratic President brought us Don’t Ask Don’t Tell, the Defense of Marriage Act, the Telecommunications Act, NAFTA and Welfare Repeal. I was not excited about Bill Clinton’s speech, and neither were a few bloggers I had spoken to beforehand.

“We have entered a new era of progressive politics,” said Clinton, “that if we do right can last for over 30 years. It is something I have worked on all my life.” Clinton spoke about the past four decades of American politics – starting with the 1966 mid-term elections – and how Republicans “developed a message that exploited voters based on fear and resentment.” But the 2006 elections changed all that – a “canary in the coal mine,” he said – and by 2008, we had won. “America is a different country today,” said Clinton. “2008 was the first election in which the country was self-consciously communitarian.”

At one point, Clinton was heckled by gay blogger Lane Hudson – who yelled about his betrayal on Don’t Ask Don’t Tell. At the Netroots Convention two years ago, I had called out Hillary Clinton over some of the same issues. But Clinton acknowledged Hudson, and said both DADT and DOMA were no longer appropriate. “America has rapidly moved to a different place from where it was,” said Clinton. It was time to have them repealed.

The blogosphere has already proven in the past five years how it can turn the tide of political momentum – in a way polls and conventional wisdom cannot measure. “You guys really beat us on Ohio-2,” said Charlie Cook – referring to the August 2005 special election in Ohio, where bloggers fueled Democratic insurgent Paul Hackett in a ruby red district. “Paul didn’t win,” said Cook, “but he came close – you focused on that race before anyone in Washington. You made it real real competitive.”

If there’s one lesson bloggers need to remember at this Convention, is that they have the power to influence 2010 election and beyond – and recent shifts in public opinion should not be viewed as definitive in affecting momentum. I do not advocate complacency, but the netroots must remember that organizing affects the future – and there is too much at stake that progressives can’t afford to lose. “The Republicans was 2010 to be 1994,” said Congressman Brad Miller. “If that happens, when will we ever have this chance?”

Then, we have the fight for marriage equality. On the eve of the Convention, Equality California announced their decision not to push for repealing Prop 8 in 2010, but instead to shoot for the 2012 election. But the Courage Campaign, which has done most of the online organizing on this issue, prefers next years. A panel at 9:00 a.m. on the struggle for marriage equality could have easily turned into a sectarian battle about which year is more appropriate. But I was pleasantly surprised to see the focus instead be on Maine, where a referendum in November 2009 could – like Prop 8 – overrule marriage equality.

“Focus on unity in Maine – not disunity in California,” said Eden James of the Courage Campaign. It’s a battle that progressives must turn their attention – with very little time.

“The opposition has called Maine as ‘ground zero’ to halt our momentum,” said Monique Hoeflinger of the No on Question One campaign, as she urged the liberal blogosphere to (a) raise early money, (b) phone bank, (c) take volunteer vacations, and (d) spread the word through the netroots. “We are not yet on the national stage,” she warned, “and they have been outspending us.”

California’s “No on 8” campaign was reactive and ineffectual, but it is clear that Maine’s effort has learned from those mistakes. For one, they actually have a game plan to inoculate from the “kids in public schools will learn about gay marriage” argument. “Part of why their message is effective,” said Hoeflinger, “is that it reaches people on an emotional level. We need to lead with the heart, because unfortunately ‘the truth’ is not the answer.”

A victory in Maine would make a great deal in fueling the momentum to repeal Prop 8, regardless of what year it goes back to the ballot. That’s why that race is so important. And that’s why progressive activists across the country need to get involved now.