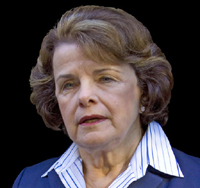 The San Francisco Chronicle has launched a drive to convince U.S. Senator Dianne Feinstein to run for Governor of California in 2010. On August 3, Chronicle columnist and ex-San Francisco mayor Willie Brown proclaimed that “If Feinstein’s in, Dem rivals should bow out.” Brown cited a poll discussed in Matier & Ross on July 27 that had Feinstein well ahead of other announced candidates in a hypothetical 2010 Democratic primary. On August 29, the Chronicle sought to maintain the momentum by announcing in a front-page headline, “Feinstein considers a run for governor.” Feinstein would be 77 years old in November 2010, five years older than John McCain is today. Her Senate record over three terms has not been distinguished. Why then is the Chronicle so strongly pushing her candidacy, particularly when it would derail Gavin Newsom’s own ambitions? Here’s some possible reasons.

Senator Dianne Feinstein has had a remarkably charmed political life. On the verge of giving up politics after the 1975 election, she suddenly became San Francisco mayor after the assassination of George Moscone. After winning election in 1979 with a left too shellshocked to offer an alternative, she faced a recall in the spring of 1983 by a fringe group—the White Panthers—which resulted in her facing no serious opponent that November.

Feinstein has long been a media darling. She is the Democrat that Republican media moguls like most.

What is the key to Feinstein’s “bipartisan” popularity? Well, as mayor she consistently opposed tenants, gay rights, and other progressive causes, and was seen by downtown business leaders as the only person standing in the way of the city’s leftward turn.

Ask anyone what Feinstein has accomplished during her three Senate terms and they will likely be stumped. She is a follower, not a leader, and hardly represents the fresh voice and new vision that California desperately needs in its next Governor.

While the media praises Feinstein for her bipartisanship, this means she casts votes that back Republican interests over those of the Democrats that elected her. She gets away with these votes because the media moguls love her, seeing her as the most conservative Democrat likely to be elected to the Senate.

Feinstein was not an activist mayor, and will not be an activist Governor. She has suffered a variety of health problems (she missed the Convention) and she would have to be remarkably hearty to campaign vigorously across the state at age 77.

Dianne Feinstein is no Ted Kennedy, a man whose passion for change will keep him on the front-burner of issues until he dies. She is not a leader in the Senate, and is not the person to come in and clean up the mess in Sacramento that the next Governor will inherit.

Feinstein the Most Conservative Candidate

Feinstein’s conservatism is one of the chief reasons the Chronicle and other media are eager to push her into the Governor’s race. Jerry Brown, who some see as the leading contender in the race, may not be to the left of Feinstein but he is too unpredictable and uncontrollable for the media to want him as the next Governor.

Gavin Newsom is seen by many San Francisco progressives as conservative to moderate, but as mayor he proved far more willing to advance progressive causes than Feinstein. Newsom has supported a number of measures that have made business unhappy, and has become too close to organized labor to make the state’s corporate leaders comfortable.

One can easily see a Governor Newsom supporting increased taxes on the wealthy and other revenue-raising measures that Dianne Feinstein would not back. Corporate California could fear that an activist Governor, coupled with an activist Democratic Legislature, could create a whale of problems for them.

In addition to seeing Feinstein as a more favorable candidate to its interests, the Chronicle could be sending Newsom a message by touting a competing candidate.
The not so subtle signal is that the Mayor better toe the downtown line or else find his hometown paper backing another candidate for Governor.

Frankly, this is a smart strategy by the Chronicle. Why not play the cards now, when they have weight, rather than letting Newsom go on to win the nomination and losing most influence over him?

Hopefully, Newsom sees through this strategy and does not allow the push for Feinstein to derail his plans. Because I do not see Feinstein actually running for Governor, and believe that even if she does run, a progressive candidate can beat her in a Democratic primary.