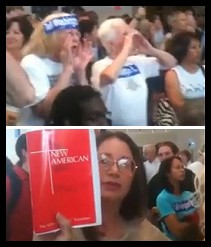 Ed. Note: As members of Congress adjourn for the August recess and hold town hall meetings in their districts, right-wing opponents of health care reform are gearing up to disrupt their appearances – hoping to scare them from supporting what 70% of Americans want: a universal health care plan with a public option. The blog Talking Points Memo has retrieved the following talking points — which we print in their entirety — that detail an intentional harassment strategy against Democratic members of Congress.

A Political Action Memo: We here in Fairfield County Connecticut conducted an action at Congressman Jim Himes’ [who Beyond Chron interviewed last summer] Town Hall meeting in May 2009. We believe there are some best practices which emerged from the event and our experience, which could be useful to activists in just about any district where their Congressperson has supported the socialist agenda of the Democrat leadership in Washington.

Our objective was to “pack the hall” with as many of our people ready to challenge the Congressman, put him on the defensive, and give him a reality check from we-the-people. We were successful in organizing about 30 people and we spread out among the crowd of about 150 people in the hall. We used some techniques early on which immediately made Himes uncomfortable, and several of us got our chance at the microphone to ask questions. Himes clearly left the hall staggered, as the meeting, billed as a progress report for his economic solutions, clearly did not go as he had planned.

We humbly submit the following as a potential playbook to conduct similar events to achieve similar outcomes in most any targeted district.

* Alert people in the district to watch for the first announcement of a Town Hall — there may be as little as a week’s notice. Have a central person advised so that the alert can be distributed to as many potential supporters as possible.

* The organizer should go to www.projectvotesmart.org and obtain the Rep’s voting record. It can be copied, pasted into Word, cleaned up, highlighted and readied for distribution.

* Questions should be prepared. Most pols are pros at deflecting off-the-cuff questions. The questions should contain facts and numbers (which are embarrassing and damning to the Rep and his voting record). They can run up to five sentences or so — you will not be cut off at that length. The questions should put the Rep on the defensive and demand a specific answer. Also, anticipate the evasive, deflective answer and be prepared with a quick follow-up. The questions should personalize the Rep, e.g. why did YOU vote for a budget that immediately carried with it a $1.7 trillion deficit? Use the Alinsky playbook of which the Left is so fond: freeze it, attack it, personalize it and polarize it. You only need to distribute five or six well constructed questions. There are some questions attached here which apply to most any Democrat that is supporting the Socialist agenda.

* The voting record and questions and any relevant articles which would place the Congressperson on the defensive should be distributed to all indicating a willingness to attend. People should be asked to meet in the parking lot of the hall a half hour before the scheduled start.

* Should you seek visibility for your group voicing opposition to the Rep’s voting record and agenda, you could schedule a press conference 20 minutes before the Town Hall is scheduled to begin. Write and distribute a press release to local newspapers and TV. Have someone available to read a prepared statement and answer questions. We actually issued the press release and were prepared for the conference. However, the media were following Himes and did show up until the Town Hall started. We distributed the statement to some of the people arriving at the hall. Copies of both the press release and our statement are attached here.

* The team should meet outside the hall with voting record and questions distributed. Everyone should be asked to use one of the questions or a similar one that boxes in the Rep. The team should also be advised to spread out inside the hall but should try to get seats in the front half. The Rep will inevitably start picking people toward the front.

* The use of protest signs outside is an option if people bring them. However, those without signs should go in the hall early enough to get good seats. Those wanting the Rep to see the signs will end up entering the hall at the last minute and will likely end up in the back with less chance to be picked for a question. Do not bring the signs into the hall if you want any chance to be picked for a question.

* Spread out in the hall and try to be in the front half. The objective is to put the Rep on the defensive with your questions and follow-up. The Rep should be made to feel that a majority, and if not, a significant portion of at least the audience, opposes the socialist agenda in Washington. They need to leave the hall with some doubts about their agenda. The other objective is to illustrate for the balance of the audience that the national leadership is acting against our founders’ principles which are on other side of the debate — and show them that there are a lot of solid citizens in the district who oppose the socialist approach to the nation’s challenges. We want the independent thinkers to leave the hall with doubts about the Democrat solutions continually proposed by the national leadership.

* You need to rock-the-boat early in the Rep’s presentation. Watch for an opportunity to yell out and challenge the Rep’s statements early. If he blames Bush for something or offers other excuses — call him on it, yell back and have someone else follow-up with a shout-out. Don’t carry on and make a scene — just short intermittent shout outs. The purpose is to make him uneasy early on and set the tone for the hall as clearly informal, and free-wheeling. It will also embolden others who agree with us to call out and challenge with tough questions. The goal is to rattle him, get him off his prepared script and agenda. If he says something outrageous, stand up and shout out and sit right down. Look for these opportunities before he even takes questions.

* When the formal Q&A session begins get all your hands up and keep them up — be persistent throughout the entire session. Keep body language neutral and look positive to improve chances of being selected. When called on, ask a specific prepared question that puts the onus on him to answer. It can be a long question including lots of statistics/facts. You will not be interrupted from reading a solid question. If you ramble on too long without a focus, you will be stopped. After the Rep answers, or more likely diverts or dodges, be prepared with a follow-up — take the initiative and you will be able to follow-up. The balance of the group should applaud when the question is asked, further putting the Rep on the defensive. If the Rep tries a particularly odious diversion, someone from the group should yell out to answer the question. These tactics will clearly rattle the Rep and illustrate some degree of his ineptness to the balance of the audience.

When the session ends, those who asked effective questions should seek out any press remaining in the hall, providing their names for attribution — you may be quoted in the press article. If the gameplan above is implemented the resulting impact will likely be:

* A Rep and his staff set back on their heels, recognizing that people in their district can see past the charade and are angry at the socialist agenda, infringement of our liberties, and profilgate spending. After a couple of these sessions one of the weaker ones may consider swaying from the party voting line.

* Audience members expecting business-as-usual go home recognizing that many of their neighbors oppose the agenda, see the dire financial impact, and see a Rep exposed to some degree as a charlatan, and put on the defensive.

* Articles appearing in the local press will amplify the above points to the local community, rather than being puff pieces for the local Representative. Two local articles about the Himes Town Hall are also attached.

We believe we achieved the desired impact with a modest amount of planning and the dedication of only a few hours to attend the event. We will travelling the state to provide a similar reality-check for all five of the Reps, and of course Chris Dodd. Just imagine what we can achieve if we see to it that every Representative in the nation who has supported the socialist agenda has a similar experience!