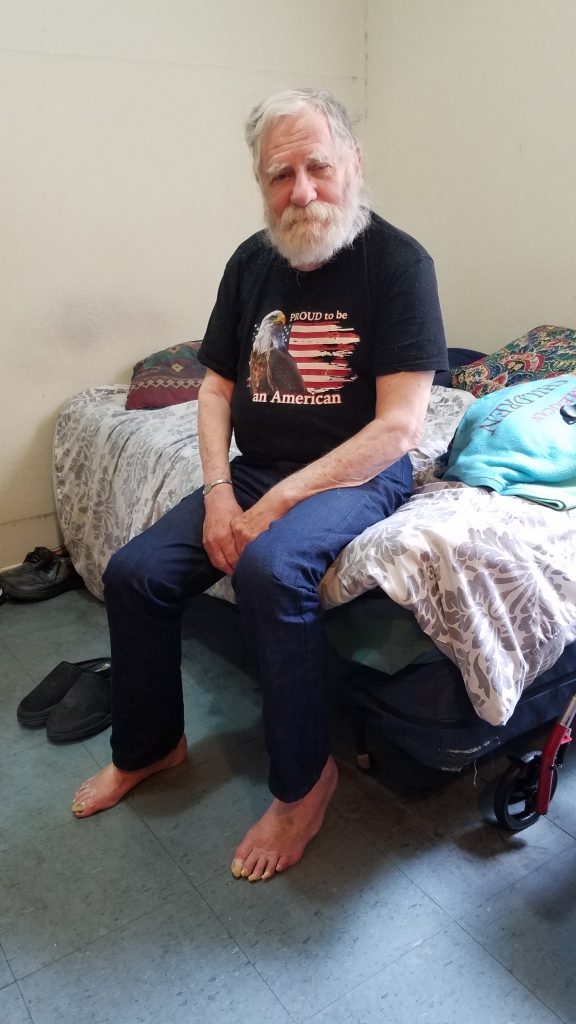 Mel Beetle is the tenant organizer at the Raman Hotel, an 84-unit SRO on Howard at Sixth Street dedicated to serving seniors and people with disabilities. It’s a position he’s held for the past seven years. “As a senior and a person with a disability (Beetle has diabetes and is blind in one eye), these are my people I’m advocating for.”

Beetle recounts several victories over the past few years. “Our hotel is used to train new employees – building and case managers. Some of them hadn’t learned how to communicate well, and once we trained them, they were assigned elsewhere. That’s been resolved. The current managers are the best we’ve had, and they’ve been here a long time.”

The postman would drop the mail on the front desk and leave. That’s changed. Each tenant now has “their own separate, locked mailbox and their own key, and the mail is delivered to the boxes.”

He organizes outside the building too. Traffic on Howard moved too fast, cars raced down the street. “It was dangerous; none of us can walk too good.” Thanks to community efforts, two new traffic lights were installed.

Though the curb next to the building was marked ‘no parking’, that ban did not extend to the Raman Hotel.  “Cars would park in front of the Hotel, so it wasn’t easy for our tenants – many of whom are disabled – to get picked up or dropped off.”  After two years of organizing and attending hearings, the City painted a no-parking sign on the curb making it easier for tenants to get in and out of the building.

The Raman Hotel is one of 21 SROs managed by the Tenderloin Housing Clinic. Named after its owner, Raman Patel, the Raman Hotel was acquired by THC in 2005. “The building had been damaged by a fire and was in desperate need of renovations, a project that was managed by Patel’s son, Dipak. Renovations included an additional floor, an elevator, and a rooftop deck with views of the city. After renovations concluded, the Raman Hotel opened its doors to new THC clients as well as individuals who were displaced by the fire.”

Mel Beetle was born in a small town outside Camden, New Jersey. After receiving his B.A. from Trenton State College, he joined the Peace Corps where he was assigned to teach “new math” in the Philippines He was assigned to train math teachers at Northern Luzon Teachers College (in the Philippines) before being moving to Hawaii to supervise training for all new Peace Corps volunteers in Southeast Asia. He frowned, remembering an episode in Hawaii.  When he and his soon-to-be wife moved to the training center in Hawaii, they experienced prejudice he’s not forgotten. “My wife, (a Filipina he met at the Northern Luzon Teachers College where he taught) and I planned to honeymoon in a fancy hotel on the island, but when we went to check in the manager said they didn’t allow prostitutes. Even our marriage certificate (and support from officials in the Peace Corps and the University) didn’t convince the manager.”

In 1975, Beetle, his wife and their two children moved to Virginia where he headed the Division of Program Evaluation for ACTION, a federal domestic volunteer agency. After his wife died, Beetle took off for Florida; a second move brought him to San Francisco and a series for volunteer positions.

In 2015, Beetle was elected president of the Governing Board of Directors at IHSS PA (In-Home Supportive Services – Public Authority). IHSS PA connects low-income seniors and people with disabilities to qualified caregivers so they can remain at home and in the community. Once again, Beetle was drawn to the training role. “I help new consumers understand how to supervise their caregiver. “Many of them have never supervised anyone. Needing assistance and knowing how to choose the best caregiver for you, and then explaining what you need from that person takes training. I help them clearly identify and describe the services they need and choose a suitable caregiver.”

Back at the Raman Hotel, there’s one issue still on the table. An increasing numbers of residents have mental health issues, “nobody in our building is responsible for making sure that tenants take their meds.” That’s true throughout the neighborhood: mental health is a major issue. While the professionals have argued for more funding for mental health, “they haven’t been very successful. We tell them, we live with these people, we know what the need is. We must be involved. They need us when they go to City Hall.” The way it stands now, there’s no data on how many people were evicted for not paying rent, and how many were evicted for behavior issues. “We need data, that’s the first step in organizing.” And Beetle is on it.