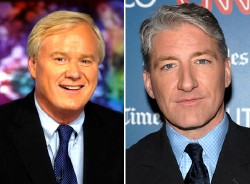 Barack Obama has been President for eight weeks, and much of the traditional media remains incapable of making sense of his agenda. In one corner we have hosts like Hardball’s Chris Matthews, who appears to be compensating for pro-Obama campaign comments by giving excessive voice to the president’s critics. Or we have CNN’s John King, who appears almost willfully ignorant in describing Obama’s budget plans. The media appears hellbent on “proving” two points: first, that Obama is breaking his campaign promise to chart a new direction, and second, that his economic recovery plan is suspect. The most common media shortcoming is intentional forgetfulness, as it downplays or entirely ignores the GOP’s own nonsensical budget plans, as well as Republican’s responsibility for the current economic crisis. Fortunately, polls continue to show the public tuning out the media chatter. The average person understands the causes and solutions of our crisis far better than the punditry, who remained trapped in an echo chamber of their own making.

When conservatives such as Alan Greenspan and Ben Bernanke support massive public investment into the United States economy, it is clear that a broad consensus supports this strategy. But if you watch the traditional media, you will hear a different story.

In the media’s world, the nation’s economy suffers from two chief problems: earmarks and excessive spending. And we know these are the top problems because a parade of pundits tells us so.

Consider a recent showing of Chris Matthews’ Hardball on MSNBC. Matthews has been criticized for pro-Obama comments, and seems to be using his show to prove that both he and his supposedly liberal network can freely criticize Obama.

Matthews’ guest was Jim Cramer, the bombastic host of CNBC’s Mad Money. Cramer spent recent years urging viewers to buy stocks in companies that have since tanked, and famously predicted that Bear Stearns was perfectly healthy just before it imploded.

Cramer told Matthews and Hardball viewers that while people were drowning, President Obama was throwing them “an anchor, rather than a life preserver.” Matthews never raised Cramer’s own dismal track record of economic projections, or his support for the free market investment policies that have destroyed the world’s economies.

Instead, Matthews left it to his other guest to rebut Cramer’s attacks on Obama’s economic program. But it soon became clear there was a problem.

The person Matthews invited to rebut Cramer was neoliberal and former Tennessee Congressmember Harold Ford. But Ford proved a curious choice. He immediately told viewers that he agreed with Cramer, arguing that the Obama plan involved too much spending and too much “pork.”

Since Harold Ford is most commonly put on the “right” side of debates — as occurred during a notorious battle he had with Markos Moulitsas of Daily Kos — his support for Cramer’s pro-free market agenda was no surprise. So Chris Matthews gave Cramer a free pass on his misguided attacks, misleading viewers in the process.

It took Jon Stewart to provide the hard-hitting rebuttal to Cramer that Mr. Hardball failed to do. But Stewart, of course, is not a “traditional” journalist.

Unlike Chris Matthews and other talking heads who frequently display a lack of knowledge of a subject matter, CNN’s John King is a sharp guy who knows the facts. That’s why his lengthy and bizarre attack on Obama this past Sunday is particularly troubling.

King was challenging White House Budget Director Peter Orszag on the President’s support for the current spending bill that includes earmarks. Orszag’s stance was that Obama inherited a bill that was negotiated last fall, and could not simply “blow it up” without alienating most of Congress.

But King took umbrage at Orszag’s explanation, and put forth an analysis that someone of his intellect would only advance if they consciously sought to mislead viewers.

First, King played a clip from an Obama campaign speech where he promised a new direction and an end to earmarks. He then pressed Orszag to admit that the President had abandoned his commitment to chart a new direction, run roughshod over his pledge for change, and ignored his opposition to earmarks.

Orszag responded that Obama was like a relief pitcher entering the game in the 9th inning, and could not change what occurred before. But King then insisted that a relief pitcher could change the game (?), wrongly implying that it did not matter the score when a reliever entered a game.

King then compounded his silliness by analogizing Obama’s conduct to that of a mayor who runs on an anti-crime platform but once in office says he cannot stop crimes committed by gangs that pre-dated his election. Huh? How is a deal negotiated by Congress before Obama took office a criminal act? And hasn’t King exactly proved Orszag’s point that Obama will stop future crimes/ earmarks?

Even worse, King selected four earmarks and said that, with over 600,000 jobs lost in the most recent report, such spending could not be justified even if it created jobs. He thus criticizes Obama for backing a bill creating jobs even though he says such jobs should be created.

At no point during his pressing of Orszag did King acknowledge that the biggest earmarkers are Republican Senators, and that Lindsey Graham, close ally of anti-earmarker John McCain, is among the worst offenders. Why did he ignore this critical fact? Because it undermines the GOP attacks on earmarks, and makes critics like King look like hypocrites for attacking Obama while giving Republicans a free ride.

Par for the Course

Unfortunately, Matthews and King are typical of the cable chatter now dominating our airwaves. On the defensive against conservative charges that they are too pro-Obama, the punditry must bend the facts and ignore history to show they are asking tough questions of the new Administration.

And in the chief area where they should be asking tough questions — Obama’s expanding troops in Afghanistan — nobody outside Rachel Maddow and Keith Olberman raises challenging inquires.

Fortunately, the Internet enables the public to bypass the punditocracy, and helps explain why public support for Obama’s agenda remains high—while the negative numbers for the obstructionist Republican Congress escalate.