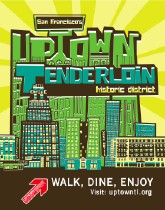 Under the headline, “Beleaguered Tenderloin sees another shooting,” the San Francisco Examiner reported on January 18 that: “another shooting in the Tenderloin on Monday night continued an alarming string of gunplay in the drug-addled neighborhood. It was one of two shootings within a two-hour period Monday. A 32-year-old man was shot in the face in the 1100 block of Turk Street around 8:30 p.m., police said.”

Where is the 1100 block of Turk? Between Gough and Webster, in the Western Addition. This week also saw a widely reported story about a “Man Shot to Death in Tenderloin Café.” This event occurred at 990 Polk, also outside the borders of the Uptown Tenderloin. In Rebecca Solnit’s brilliant new book, Infinite City: A San Francisco Atlas, she includes a map of homicides in San Francisco in 2008. Guess which hipster neighborhood had a murder rate over four times that of the Uptown Tenderloin? The Mission. But when murders occur there, or in SOMA, the media does not blame the neighborhood.

I have regularly written that the Uptown Tenderloin has too much crime while also noting that police statistics show that 99% of those arrested in the neighborhood do not live there. Yet the media is so fixated on denigrating the Uptown Tenderloin as a bastion of crime and violence, that it regularly associates the neighborhood with events occurring far outside its borders.

Even when the city’s first murder occurred in the Uptown Tenderloin (the assailant was from East Palo Alto), the media felt compelled to associate the neighborhood with a homicide at 1100 Market, outside its borders. In contrast, the high-profile police shoot-out at Howard and 10th Streets made so little reference to SOMA that an outsider might of thought this too was in “the Tenderloin.”

When the federal government began doling out money to cities in the 1960’s, it divided San Francisco for funding purposes into several “Strategy Areas.” The North of Market Strategy Area was bordered by Market, Powell, Van Ness and Post Street.

When the North of Market Planning Coalition was formed in 1979, it used the strategy area map to denote its borders. But this federal division for funding had no connection whatsoever to the historic borders of the Uptown Tenderloin.

For its entire history, Van Ness Avenue has never been part of the Uptown Tenderloin. Polk Street also has a separate history and culture distinct from its adjacent neighborhood.

Powell Street was the border of the original Uptown Tenderloin, but development starting in the 1960’s changed the stretch from Mason to Powell so that it was excluded from the Uptown Tenderloin Historic District.

While elements in the media have a broader agenda to push crime into the Tenderloin so that other areas appear safer by comparison – and all those reporters who tell me that folks won’t come to the Uptown Tenderloin due to crime should check out Solnit’s Mission murder stats, which certainly haven’t hurt restaurants and bars there – much of the problem is pure ignorance.

New reporters do not know neighborhood boundaries, so they check their paper’s files. They find stories saying that Market or Polk or any address on Turk or Eddy is part of “the Tenderloin,” and then repeat the error.

This process has gone on for years. It makes you wonder whether Chronicle or Examiner city editors themselves know the boundaries of San Francisco neighborhoods.

When the Hearst Corporation (which now owns the Chronicle) owned the Examiner, it once created a special section on San Francisco neighborhoods. The paper believed that San Francisco’s richness was found in its neighborhoods, and had a flock of solid reporters bringing important news of what was happening in these communities.

We’ve gone a long way backward from those days. But at the very least the media can stop reinforcing negative perceptions of the city’s most ethnically diverse neighborhood by associating it with crimes that happened elsewhere.