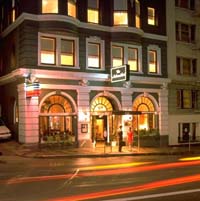 Supervisors Peskin and Sandoval have two excellent ideas for addressing the city’s $97 million shortfall, but both proposals are already under attack from our daily newspapers. The Supes’ problem: they believe that the hotel giants that make millions from San Francisco hotels should pay their fair share. But the Chronicle and Examiner will not stand for such plans.

Last week, Supervisors Sandoval and Peskin advanced two great ideas for helping to solve the shortfall. Both proposals deserve the support-both in votes and public statements-of their colleagues.

Sandoval’s common-sense idea is to have those profiting from tourism pay a greater share of the cost of promoting their industry. The reasoning is clear for two reasons.

First, public funds are typically not used to promote private profits, which is why San Francisco does not spend taxpayer dollars promoting its hardware stores, its corner groceries, or even its unique features like the Castro Theater.

Many will be surprised to learn that taxpayers currently give the tourist industry $3.7 million annually for advertising the city. Some call this money a solid investment for the greater public good; others would describe it as corporate welfare.

In light of the huge advertising budgets for San Francisco’s top hotels and dining spots, must the city spend an additional $3.7 million in public funds to attract tourists? It is certainly fair to ask what bang the city is getting out of this sizable buck, particularly when budget cuts mean dirtier streets, unkempt parks, and less recreation facilities for San Francisco’s youth.

But Sandoval’s words were barely spoken before the tourist industry used the Chronicle and Examiner to launch a powerful counter-attack.

In Rachel Gordon’s November 25 story (“Supervisor wants to cut funds for tourism agency. Colleague says board won’t kill ‘goose that lays golden egg'”), San Francisco Convention and Visitors Bureau head John Marks insisted that the city’s tourist budget “should be doubled-not cut.” With Sandoval out of town the paper quoted his colleague, Jake McGoldrick, who asserted that “there’s no way we’re going to kill the goose that lays the golden egg.”

McGoldrick is absolutely right, demonstrating the savvy that brought him re-election. Killing a golden goose that lays golden eggs is a terrible idea.

But is the $3.7 million in public funds the golden goose, or is San Francisco’s natural beauty and cultural tolerance producing the golden eggs? Private business spend millions on attracting tourists to San Francisco, and the role played by taxpayer funds in obtaining the ultimate result is unclear.

In assessing how the city can best weather the budget storm, the Board needs to know how taxpayer dollars impact the city’s tourist industry. The Board also must assess whether private funds could make up the lost city money, an option clearly not available for avoiding the layoff of health workers or the closing of recreation centers.

Sandoval has opened the door for a public discussion of this issue, and even those opposed to his proposal should appreciate the opportunity to prove their case in a public forum.

The Examiner headed its November 26 response to Sandoval’s proposal, “Tourism P.R. cut could hurt region.” But Adriel Hampton’s story noted that San Diego, one of San Francisco’s chief competitors for tourists, sharply cut its own Convention and Visitor Bureau funding sharply in the past two years.

If San Francisco’s competitors are cutting their tourist funding, logic says we can safely follow suit. But look for both daily papers to oppose any cuts to the tourist industry regardless of what this means for vital city services.

Peskin’s proposal is to impose a $6 impact fee for each hotel room used for convention business. This would raise about $5.5 million, or nearly half what the general fund pays to operate Moscone Center.

The logic behind Peskin’s idea is unassailable. All convention hotel expenses are either paid by corporations, or are fully deductible as a business expense if paid by individuals. The proposed $6 increase will only impact those who can readily afford to pay.

Moreover, hotel occupancy rates went through the roof even though San Francisco hotels raised room rates to record levels in the 1990’s. Although the current market is not as strong, no industry is going to change convention cities over $6 per night.

The Examiner’s November 26 story, “Hotels decry fee idea” states in the opening paragraph that Peskin’s proposal, like Sandoval’s, “threatens the hotels’ bottom line.” But the only basis for such a conclusion is a statement from the executive director of the Hotel Council that “too many fees” could reduce occupancy and hence diminish hotel tax revenues.

For a more objective assessment of the proposed fee’s impact, the Board should examine how previous room rate increases have affected occupancy rates. Of course, this would require hotels to disclose information they might prefer to keep secret, but the Board should demand a factual basis for the hotels’ claims that the $6 fee will hurt occupancy, not mere rhetoric.

If you have never seen the tourist industry descend on City Hall, let’s put it this way: it makes the all-out campaigns to save massive bloat in the Fire Department look like amateur hour. The Visitors Bureau has already sent an alert about the Sandoval proposal to its 3700 members, and expect arts and cultural groups receiving hotel tax money to be brought into the campaign against Peskin’s measure.

In past years Local 2 has joined the tourist industry’s lobbying efforts, and has made a big difference in swaying progressive supervisors. But the union just spent months advertising how many millions in profits the San Francisco hotel industry is generating, making it difficult for them to claim that unionized gardeners and health workers should be laid off so that the tourist industry is protected.

It is also worth remembering that the hotels no longer pay the city’s business tax. This loss of revenue—due to a lawsuit by the owner of the San Francisco Chronicle and others—is the chief cause of the city’s current budget deficit.

The combined savings of the tourist industry proposals is about $9.2 million. Add in the Mayor’s proposed Fire Department cuts of $7.5 million and the city still has over $80 million to go.

It’s not going to be a cheery December in San Francisco’s City Hall this year.