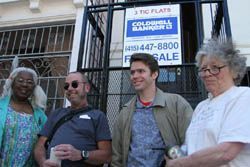 It’s been a week since the de Young Museum opening, and the Bay Area media somehow ignored the person who San Franciscans should thank most for the privately-funded project: Ted Gullicksen of the San Francisco Tenants Union. But for Gullicksen’s intensive effort in the waning weeks of the June 1998 de Young Bond campaign, the city’s property owners would be paying higher taxes and tenants higher rents. The reason wealthy donor Dede Wilsey was so surprised by the bond’s defeat was that nobody thought that Gullicksen and tenant activists could turn around support for the bond three weeks prior to the election. But they did.

Less than a month prior to the June 1998 election, Mayor Willie Brown and the Board of Supervisors changed city law so that landlords could passthrough their entire share of the de Young Museum bond (Prop A) on to their tenants. The change was made after the ballot handbook was printed, club endorsements made, and with little money available to even inform tenants about how the bond would raise their rents (this was in the pre-Internet era).

Ted Gullicksen and myself, who had been part of the infamous “deal” discussed in the New Yorker magazine’s profile of Willie Brown, were, to say the least, bitter as to the turn of the events. The notion that a bunch of rich people wanted low-income tenants to pay for their museum was an outrage. But the Yes on A campaign had a million dollar war chest, every major endorsement in town, and the San Francisco Chronicle—then owned by the de Young family—was touting the bond as the city’s salvation.

To give an example of what tenants were up against, Yes on A arguments in the Ballot Handbook went on for thirteen pages. It included endorsements from both major political parties, anti-tax State Senator Quentin Kopp, US Senators Feinstein and Boxer, every member of the Board of Supervisors, the Mayor, District Attorney, City Attorney, Sheriff, Assessor, Public Defender, the San Francisco PTA, and the Coalition for SF Neighborhoods.

In contrast, the No on A arguments took up three pages. The Green Party, San Francisco Tomorrow, and HANC were the only well-known opposition groups, and none of the individual opponents were elected officials or prominent San Franciscans.

Not deterred by seemingly insurmountable obstacles, Gullicksen and the Tenants Union decided to focus the last three weeks of the election campaign entirely on defeating Prop A. This decision was made even though tenant activists were already engaged in defeating a measure on the ballot (Prop E) to repeal rent control for small buildings.

The new plan was to drop cheaply made No on A flyers along with the No on E literature still left to be distributed. In addition, thousands of Tenant Times stuffed with No on A inserts were distributed in the Mission, and No on A leaflets were handed out at Bart and Muni stops.

This No on A activity was under the radar screen, particularly for the Pacific Heights crowd pushing the taxpayers to fund de Young. While Prop A spokespersons stated publicly that they did not want to get ensnared in a landlord-tenant dispute, they were silent as the Mayor and Supervisors voted to shift the cost of the bond to tenants. Given Mayor Brown’s close relations with the social set in Pacific Heights, tenant activists believed that pro- A forces could have stopped the new passthrough law if they had wanted.

On election night, it became clear from the absentee count that tenants had swamped the anti-rent control campaign. This was the infamous Prop E campaign where current Newsom political consultant Eric Jaye had the brilliant idea to run a series of “homeowner horror stories” describing “tenants from Hell.”

Jaye’s theory was that voters would be so outraged to hear that a tenant had taken food out of their landlord’s refrigerator that they would conclude that rent control should be abolished. My favorite piece was titled “Nightmare on a Street called Elm,” which like the others included a photo of a frightful looking landlord. Jaye’s strategy proved so unpopular that Prop E lost in all but one neighborhood across the entire city.

The victory over Prop E was rewarding, as we were outspent about 10-1. But nobody doubted the measure was headed for defeat. Prop A was a different matter.

Since many of the Prop A absentee ballots were submitted prior to the tenant-led No on A campaign, and early numbers had the bond well ahead. That’s why the Yes on A campaign headquarters was in a state of shock over the final results, as things looked extremely good at the start.

In those days, votes from the progressive parts of San Francisco always came in at the end. So Prop A remained over the 66.7% threshold for passage with over half the returns counted.

But then votes came in from the Tenants Union’s strongest base, the Mission. And while Mission voters typically strongly backed bonds, the de Young bond would prove the exception.

To my best recollection, Prop A failed to even garner a 50% majority in many Mission precincts. The bond ended up doing so poorly in high-tenant areas that when the dust cleared, the multi-million dollar Prop A political stampede had been vanquished.

I have never seen more shocked people at a voter registrar’s office on election night than the backers of Prop A in June 1998.

The icing on the cake came when Ken “always wrong, never in doubt” Garcia wrote a post-election Chronicle column that denounced tenants for killing the bond.

A backhanded compliment, true, but at least credit was given. Which is more than can be said for the paper’s recent coverage, where Gullicksen gets no credit for saving property owners and tenants millions of dollars by forcing Wilsey and her friends to build the museum with their own money.

When you think of the money you saved, consider sending a donation to the Tenants Union at 558 Capp Street, 94110. Tell them its in honor of the new, privately funded de Young.