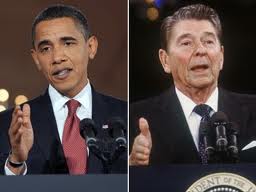 Although President Obama won a sweeping re-election victory, the media has regularly highlighted Speaker Boehner’s contention that “the American people re-elected the president, and re-elected our majority in the House. If there is a mandate, it is a mandate for both parties to find common ground.” Yet when Ronald Reagan defeated Jimmy Carter in 1980, the media called it not simply a “mandate” but a “revolution.” Democrats retaining House control in the 1984 elections was also deemed irrelevant to the national political mood. That’s what’s called traditional media bias, and a pro-Republican double standard.

President Obama is not buying the notion of a Republican House “mandate,” but that does not change the fact that the media has framed the GOP’s keeping control of the House differently than ever before. And it’s elevation of the GOP House victory is even less warranted than in 1980 and 1984 because Democrats nationally won a majority of votes in House races.

Does this media framing matter? It sure did after Reagan took office in 1981. He got through Congress the most destructive tax and budget bills in the nation’s history because the media—-despite Democrats maintaining House control—pressured Democrats to give in to the alleged public mandate solely defined by Reagan’s victory.

The media then claimed the voters’ reaffirmed support for Reagan’s rightward turn in 1984, even though Democrats still retained House control.

We didn’t have online news and commentary or social media in those days, so the traditional media’s framing had no real challenge. Fortunately, new media tools have undermined Boehner’s “equal mandate” nonsense, and the public is not buying it.