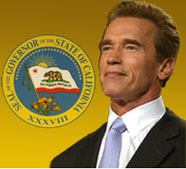 The response to Governor Schwarznegger’s $102 billion state budget shows that the media fawning over the actor that began during the recall campaign remains in high gear. While he is praised in the San Francisco Chronicle for “radical, almost revolutionary behavior,” the Governor’s budget raises prison spending by $500 million while imposing university enrollment caps and steep fee hikes for college students. The budget also pushes the tougher budget choices to next year, a strategy denounced by the media as a “gimmick” reflecting a lack of leadership when used by former Governor Gray Davis.

Beyond Chron will have ongoing coverage of the Governor’s proposed budget starting next week, but in the wake of the budget’s release the framing of the debate and issues at stake are already clear.

The main theme in media coverage of the Governor’s budget is that it “avoids deep cuts in spending and includes no new taxes.” Thus, the $1.3 billion cut from local governments, the $660 million in cuts that reduced new student enrollment to UC’s by 10%, and the planned $400 million Medi-Cal cuts to be announced this summer are not considered “deep” cuts.

For over 60 years, Californians paid a vehicular license fee based on the sales price of their car. After a Republican political consultant in Virigina found that voter anger could be aroused over this fee, Republican candidates across American began hammering for the repeal of the suddenly unconscionable “car tax.”

The media accepted the redefinition of a longstanding fee into a new “tax,” but continues to label huge tuition hikes as “fee” rather than “tax” increases. This allows the Governor to be described as keeping his “no new taxes” pledge, while raising revenue in the most regressive manner possible (since the car fee was higher for expensive cars, the rich paid proportionately more; in contrast, the amount of the tuition fee increase is unrelated to family income)

While Gray Davis was regulary criticized for overfunding prisons, Schwarznegger proved he is no slouch. His lean and mean budget found an extra $500 million for prisons, and this total could rise to $800 million if the prison guards union refuses to renegotiate their contract.

The Governor has proposed to save money by cutting the number of meals served to prisoners on weekends to two a day. Maybe he’ll make up for this by giving them the leftovers from his nightly banquets.

According to polls, voters are angry about the Legislature’s failure to pass a budget by the June 15 deadline. The fact that delays in recent years have been entirely caused by right-wing Republicans is apparently irrelevant, as it is “the Legislature” that takes the blame.

Since the right-wing is quite content with the Governor’s budget, and Assembly Democrats in swing districts do not want to do anything to risk re-election, expect the budget to pass on time. This will give the media another opportunity to heap praise on Arnold, while ignoring his refusal to raise the revenue necessary to safeguard educational opportunities for young Californians.