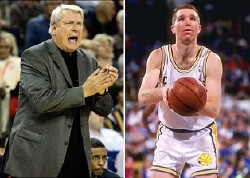 It was not too long ago that the local sports media identified former Warrior great Chris Mullin as the salvation of the long-flagging franchise. When Mullen gained control of the team’s personnel decisions — despite any prior experience — sportswriters and talk show hosts treated it like the return of the prodigal son. This feeling was heightened when Mullin brought back Don Nelson to coach the team, and when the Mullin-Nelson combo brought the Warriors to the playoffs in 2007. But those familiar with Nelson’s prior tenure with the W’s could have predicted the future: a team lacking sufficient size and defensive skills to get beyond the first round of the playoffs. It was déjà vu all over again, and yet the media remained on the Mullin-Nelson bandwagon. Now Warrior fans know the truth: Mullen failed, Nelson elbowed his former player out of a job to get his own three-year deal, and the team’s future is bleak.

The Thrill is Gone

Chris Mullin and Don Nelson, with a big help from Baron Davis, gave Warrior fans tremendous thrills during the team’s 2007 playoff victory over the Dallas Mavericks. But those thrills are long gone, and the team might not return to the playoffs for years.

Mullin did not know how to assemble a team capable of competing for a title, and he did not know how to deal with the salary cap. While he had bad luck with Monta Ellis’ injury, the Baron Davis contract dispute was foreseeable (Mullen wanted to give the oft-injured, aging star a lucrative longterm deal, and was fortunately overruled), and his reaction to losing Baron — overpaying for Corey Maggette — reflected a leader lacking a clear plan for success.

Mullin defenders often forget that Davis had the healthiest year of his career in 2007-08 — and yet the W’s failed to make the playoffs. In other words, Mullin’s best team was not one of the top eight in the Western Conference.

At least Baron was exciting to watch. Now the W’s lack any team identity, primarily relying on such cast-offs as Jamal Crawford, Stephen Jackson, and Maggette.

This team could come out one day in the uniforms of the Los Angeles Clippers, and many fans would not notice the difference.

Sportswriters love hanging out with former superstars, and so routinely encourage their hiring for front-office posts. Consider Larry Bird.

Bird was hired by the Indiana Pacers without any prior coaching experience, did a terrible job, and was rewarded by being promoted to team president. Since Bird assumed that job, a team that steadily made the playoffs prior to his arrival has become one of the worst franchises in the NBA.

Does Bird get blamed? Absolutely not, and he is now being credited for “turning” the Pacers around (even though their record is 7-10)

Similarly, local sportswriters and the KNBR talk show hosts now portray Mullin as some sort of “victim.” Well, he might be a victim of backstabbing from a worn-out coach whose career he salvaged, but Mullen controlled the personnel decisions and the W’s were his team.

What happened to accountability? And yet the Chronicle’s Bruce Jenkins, a leader in the Mullin can do no wrong camp, is now promoting Mullin as a future general manager of the Knicks!

And such gloves-off treatment of Mullin and Byrd is the rule for white former starting NBA players who enter coaching or management. Think of Kevin McHale’s disastrous career in Minnesota and Mike Dunleavy’s multiple failures.

As a W’s fan during the Run TMC days, I knew Nelson is incapable of taking a team beyond the first round. He didn’t stress defense in Dallas, so why would he do so back in Oakland?

Now Nelson has assembled a team of interchangeable scorers, with an offensive rebounder nowhere in sight. The new W’s are anchored by Jackson, Ellis, Biedrins and Maggette. All have large contracts, meaning that there is little room for the team’s younger talent.

The Warriors personnel is not geared to get very far in the playoffs, assuming a healthy Ellis can get them back to the first round in 2009-10. And even if the Warriors do have success that year, Don Nelson retires after the next season, which means a new coach, a new system, and a new rebuilding process.

So this team has no future, just like all the others since Chris Cohan became owner.

George W. Bush will be gone January 20, but Cohan remains. We need term limits on sports team ownership, and once the economy is fixed, perhaps Nancy Pelosi and Barbara Lee can push legislation implementing this.