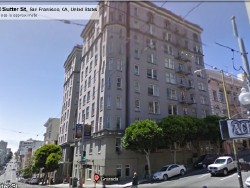 I have written many times about the Bay Area media’s insistence on placing violence in the Uptown Tenderloin that has actually occurred well outside the district. A particularly outrageous example occurred on September 27, when the San Francisco Chronicle, the San Francisco Examiner, and NBC News 11 all ran a story falsely identifying a shooting at Sutter and Hyde as occurring in “the Tenderloin.” The stories wrongly claimed the killing occurred in a “Tenderloin residential hotel,” when it actually took place in an upscale Lower Nob Hill residence club for seniors. The northern border of the Uptown Tenderloin Historic District is two blocks below Sutter at Geary Street, and Sutter Street has never been considered part of the Tenderloin; it looks again like the media prefers to reinforce prevailing perceptions of two neighborhoods rather than tell the truth.

I recently credited Mayor Newsom’s press office with correctly placing a high-profile murder of a German tourist on the 400 block of Mason as occurring in the theater district, rather than the Uptown Tenderloin. Unfortunately, left to its own devices the local media continues to falsely place violent conduct in a neighborhood striving to change its longtime association with criminal activity.

To its credit, the Chronicle’s website, SF Gate, changed its original story and deleted all references to the Tenderloin. But most of its readers likely saw its initial headline, “Officer fatally shoots Tenderloin hotel resident,” which was wrong on two key counts and may have led other media to similarly misreport the story.

The Uptown Tenderloin has its share of crime, but our local media repeatedly goes out of its way to place crimes in the neighborhood that have occurred elsewhere. News editors apparently believe that the public will feel safer if high-profile crimes are confined to certain neighborhoods – whose restaurants, bars and businesses can then be avoided.

The most obvious motive is to protect Lower Nob Hill’s pristine image at the expense of a neighborhood long associated with crime. If people think that violence is occurring even in more upscale Lower Nob Hill, they might think twice before visiting the neighborhood and perhaps the City; better to put these murders in a community that those fearing crime already avoid.

That a police officer committed the shooting does little to change the public perception. People hearing the story believe that violence has again occurred in the Tenderloin, and in one of those notorious “Tenderloin residential hotels.”

Our marketing survey for the planned Uptown Tenderloin Museum found that people who were familiar with the neighborhood had much less fear of visiting its businesses than those with no experience there. This latter group forms its impressions from the media, which persists in wrongly identifying the community with violence and crime well outside its borders.

A story about a police officer shooting a tenant following a noise complaint at a very upscale lower Nob Hill residence club could have created a public debate over police training in such situations. Instead, most hearing the story filed it away as “another shooting in the Tenderloin,” as the media defamed a neighborhood and its businesses while getting the essential story wrong.