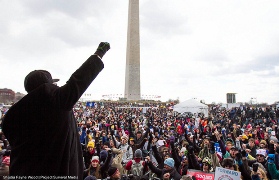 When 35,000-50,000 people turned out on February 17 for the largest climate change protest in United States history, the event should have gained ample coverage in the New York Times and other national media. But it did not. Instead, the event was relegated to the Business section of the Times, and Keystone was framed not as a landmark outpouring of opposition but as a political problem for President Obama. Joining in downplaying the protests were the leading Sunday talk shows—NBC’s Meet the Press, CBS’s Face the Nation, and ABC’s This Week —all of which ignored Keystone and climate change; they preferred allowing John McCain and other Republicans to vent about Benghazi. This disdain for activists working to combat climate change is illuminating. It reflects the powerful corporate interests opposed to such efforts, and the media’s framing Hurricane Sandy and other destructive weather as requiring powerful action from politicians, not activists.

While the progressive online media and MSNBC’s Chris Hayes did highlight the historic climate change protest at the Washington Monument last Sunday, the event failed to resonate through the traditional media. One reason is that the protest did not include the Republican talking heads who dominate Sunday talk shows even when their party controls neither the White House nor the Senate. Another is that climate change is rarely mentioned on Sunday talk shows. Media Matters found in an April 2012 study that the leading Sunday shows spent only 21 minutes on climate change in 2010 and only 9 minutes in 2011; and this includes FOX News’ coverage challenging the very idea of human-made climate change.

Even Donald Trump got more coverage on Sunday talk shows in 2011 than an issue that impacts the future of the planet.

Most of the traditional media is not ideologically opposed to discussing climate change; but it wants politicians, not activists taking the lead.

This is particularly true when the sponsors of last Sunday’s event included Hip Hop Caucus, undermining conventional media wisdom that people of color are estranged from the allegedly “white” environmental movement (Van Jones, a featured speaker at the protest and longtime green jobs advocate, also defies such false media stereotypes).

Even worse from the old media’s standpoint is that the Keystone protests joined activists like Bill McKibben of 350.org and Sierra Club President Michael Brune with celebrity activists like Darryl Hannah and Mark Ruffalo. The media has scorned this connection since the anti-nuclear power days, arguing that movie or rock stars are not “qualified” to speak about public policy issues (a criteria waived when its Ted Nugent talking about guns).

The media endorses grassroots activism for gun control and immigrant rights, but draws a line when it challenges powerful, multi-national corporate interests. That’s why traditional media expresses skepticism toward activism against global “free trade” agreements, and downplayed or ignored the historic protest against Keystone.

It’s often said that if the people will lead, the leaders will follow. On climate change, the traditional media wants the people to wait for politicians to act, even if this means doing nothing.

Keystone opponents have done a brilliant job framing the project as a symbol of the nation’s willingness to seriously combat climate change. And this deeply angers “liberal” supporters of the pipeline, who also see themselves as backing anti-climate change efforts.

The NYTimes’ Joe Nocera, who has repeatedly writing pro-Keystone columns, is a case in point. On February 19, Nocera described efforts to turn Keystone into a litmus test for the President’s commitment to climate change as “utterly boneheaded”—a sure sign the strategy is working.

Nocera and other self-proclaimed supporters of efforts to combat climate change have convinced themselves that building the environmentally destructive pipeline is the pro-climate change position, and that opposing Keystone is “counter-productive.” They truly believe that they a better sense of how the environmental movement should proceed than the Bill McKibben’s, Rev. Lennox Yearwood Jr.’s and others who have dedicated their lives to the cause.

For decades the environmental movement faced a challenge: its broad agenda made it difficult for a multi-issue group like the Sierra Club to use any single campaign as a litmus test issue for politicians. Today, the movement recognizes that if Keystone is approved, President Obama’s words about combatting climate change have lost all meaning.

The media insiders may not like it, but the public recognizes that Keystone is precisely the best litmus test for the President. And should Obama approve Keystone after rejecting ozone regulations in 2011, there will be no way for him to repair his weak environmental legacy.