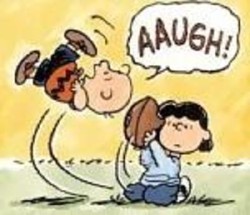 Despite all of the economic history of the past 30 years, the traditional media is brushing off its favorite bogeyman – the budget deficit – to defeat and/or scale back President Obama’s progressive budget, education and health care agenda. The New York Times warned in a front page story on March 21 that a new forecast by the Congressional Budget Office for deficits $2.3 trillion higher than Obama projected “Casts Shadow on Obama Agenda;” CBS News said the new estimate capped off Obama’s “worst week as President.” But in quoting with approval the same Republicans that backed deficit-busting tax cuts under Ronald Reagan and George W. Bush, the media shows that its problem is not with deficits per se, but rather with deficit spending that is used to solve social problems. Most of the media fails to remind its audience that the GOP had no problem with deficits when incurred for tax breaks for corporations and the rich. It’s as if when Charlie Brown annually approached the football, the media told the audience that Lucy had a long history of holding the ball steady for his kick. The media’s ignoring of past history enables opponents of progressive programs to act like voices of fiscal caution, rather than as steadfast enemies of programs that boost social and economic injustice.

In 1981, President Ronald Reagan plunged the nation into record deficit spending by giving huge tax cuts to the wealthy and corporations. These tax cuts embodied the new GOP political agenda, which continues to this day.

When Bill Clinton finally returned the White House to the Democratic Party in 1993, he initially sought to invest in people’s needs. But Republicans and conservative Democrats – aided by the media – rebuffed this effort, arguing that Clinton needed to reduce the mammoth Reagan-Bush Republican deficit.

So Clinton fails to meaningfully invest in health care, education, housing, or alternative energy during his eight years, and leaves office proud of the fact that the major deficit he inherited has become a surplus. Voters care so little about this achievement that they put George W. Bush in a strong enough electoral position so that he can steal the presidency.

Bush immediately dissipates the deficits through massive tax cuts for the wealthiest Americans. He also plunges the nation into a trillion-dollar war with Iraq without ever being pressed by the media on how the country would pay for it.

The nation’s budget deficit was a non-issue in the 2002 and 2004 elections, both of which brought big Republican victories.

With the nation in its worst economic crisis since the Great Depression, and with even conservative economists calling for massive public investment into the economy, we now have the media treating seriously claims that the Obama Administration should scale back universal health care and the rest of its ambitious agenda because of potentially large budget deficits.

Conscious Disinformation or Giving Both Sides

For many progressives, the corporate media’s failure to confront Republicans with their past backing of record deficits represents a conscious disinformation campaign. Since the GOP’s record on deficit spending is beyond dispute, denying this past – like denying Lucy’s decades of snatching the ball as Charlie Brown approached it – seems clearly designed to mis-educate the public.

But some would argue that the media needs two sides, that conflict drives ratings, and that this requires the media to let Republicans choose their frame of argument without casting aspersions on its merits. Recall that in his recent “debate” with Jon Stewart, CNBC’s Jim Cramer said that his network could not quote a CEO and then tell viewers that the man was lying.

If the media told viewers directly that critics of Obama’s spending programs have no credibility in light of their past votes, it would be attacked as biased. So to avoid such charges, the media provides a misleading analysis that rewards those seeking to run from their record.

No wonder young people are deserting traditional news sources by the millions!

The Concord Coalition vs. Code Pink

The media’s artificial pursuit of “objectivity” has led it to put the Concord Coalition in the middle between Republicans and Democrats on the Obama budget. Entirely a creation of financier Pete Peterson, the Concord Coalition lacks any electoral or grassroots base but does have the ability to get prominent ex-politicians to sign full page New York Times ads warning of the danger of budget deficits.

The Concord Coalition is hardly neutral in the deficit spending debate, but the media puts the group forward as an “independent” source. Considering that their views on spending for human needs are almost indistinguishable from Republicans, they hardly offer a new perspective.

Contrast the corporate media’s regular use of the Concord Coalition with its refusal to promote the views of the anti-war group, Code Pink. Unlike the Coalition’s budget deficit stance, Code Pink’s anti-war perspective was shared by millions. It also uses high profile though less costly tactics to enter the national debate, yet there was not a snowball’s chance that any major television network would let one of their representatives discuss Iraq.
What Can Be Done

Passing the Obama agenda requires the type of grassroots activism that won him the presidency. And this appears to be happening both through Obama for America and by a coalition of progressive groups.

Fortunately, the Internet also exists to offer alternative perspectives on the day’s events. It may be extreme to follow what a recent diarist on Daily Kos suggested and “stop watching television news shows,” but its clear that reading dailykos, along with Media Matters, http://mediamatters.org/, provides a one-two punch for political reality.

Progressives will win this fight to redirect the nation’s spending priorities so long as they do not let media distortions get them down. So those addicted to traditional news must remain vigilant to verify what they hear from trusted online sources, which would never hesitate to warn Charlie Brown that Lucy cannot be trusted.