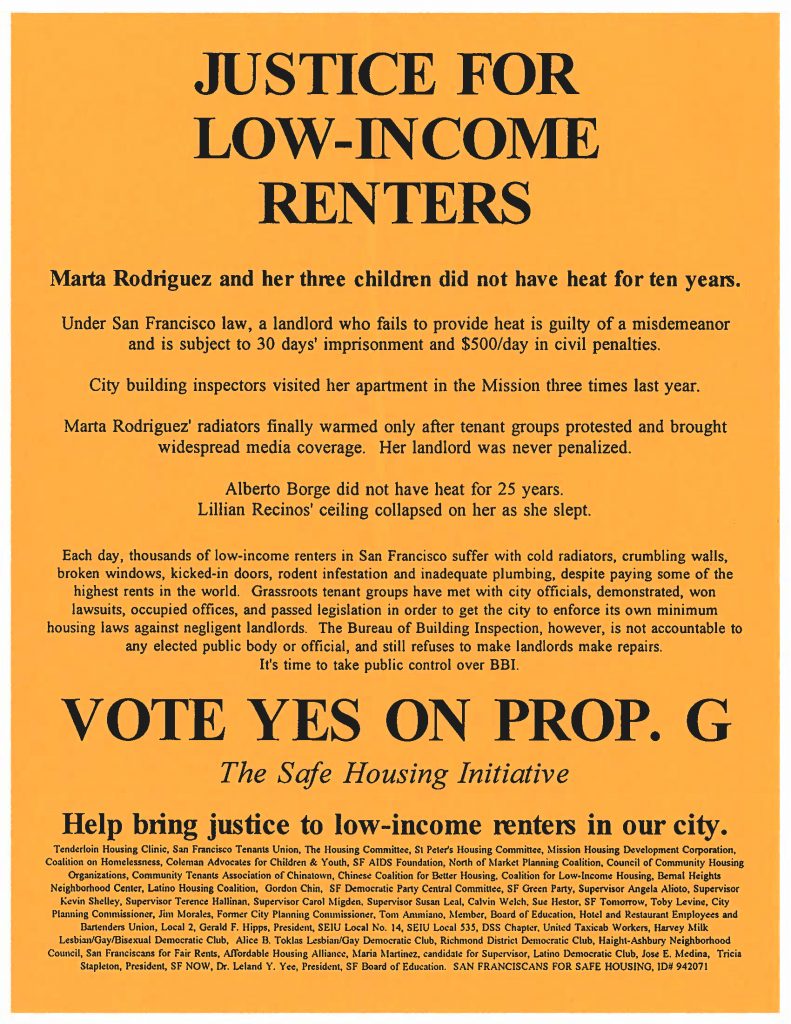 San Francisco’s Department of Building Inspection (DBI) is the national leader in protecting living conditions for low-income tenants. DBI’s housing code enforcement procedures are a model for cities across the land. Credit goes to DBI’s publicly appointed commission, which provides oversight, policymaking, funding and an arena for community feedback. It has served San Francisco well for 25 years.

Yet despite this success there is now media pressure to change this. This makes no sense.

Eliminating or weakening DBI’s  commission puts tens of thousands of tenants at risk.  Yet some are considering that wrong move in response to a media drumbeat of “corruption” stories targeted at the Department of Building Inspection.

Corruption charges against city leaders in San Francisco and other cities are nothing new. Last week Los Angeles saw the indictment on bribery charges of powerful former county supervisor and  current councilmember Mark Ridley-Thomas. In 2020,  then- LA councilmember Jose Huizar was indicted on 34 criminal charges.

In the past decade San Francisco has seen leaders of the Health Department, Department of Public Works, SF Public Utilities Commission, DBI and the City Administrator all leave following corruption allegations. But what is regularly ignored by local media is that DBI’s new leadership responded to corruption allegations against former Director Tom Hui by undertaking critical anti-corruption reforms.

These reforms were set forth in an September 16, 2021 San Francisco Controller’s report. Among the reforms that current acting director Patrick O’Riordan is implementing is a series of new compliance controls and consumer protections called for by Supervisor Hillary Ronen. You can read about all the reforms on DBI’s website under Reform Initiatives.

According to the City Attorney’s office,  “Since Patrick O’Riordan was named Interim Director in March 2020, DBI has worked with the City Attorney’s Office and the Controller’s Office to identify and correct problematic practices and to investigate employees who may have engaged in misconduct or abused the public trust. It will take time, but we are committed to righting the ship and cleaning up any messes that have been left behind.”

Some in the media are writing stories based on accounts from inspectors who don’t want O’Riordan to become permanent Director. I would trust the City Attorney’s view of O’Riordan over inspectors with an axe to grind.

The first tenant representative on the new DBI commission in 1995 is now the Chief of the Housing Division. Tell me another agency in San Francisco where tenants get such representation and power. There is none.

I authored the November 1994 ballot measure that created the DBI. I know what a dramatic difference the commission-run agency has made for the city’s low-income tenants. Before DBI the city allowed tens of thousands of tenants to live without heat, prioritized closing down in-law apartments over suing slumlords, and ignored hotel conversion violations (see campaign flyer above). DBI completely transformed the city’s approach to low income tenants. San Francisco is now a national model for effective code enforcement and protecting SRO hotels.

San Francisco long ran under an undemocratic system whereby agencies were under the control of an unresponsive Chief Administrative Officer (CAO). The CAO offered no opportunities for public input, policy review or anything else. CAO’s were granted ten year terms to ensure their complete lack of public accountability.

Over time, voters decided that this lack of accountability was not working. In November 1994 they passed Prop G and created DBI. Soon after they replaced the CAO with a less empowered City Administrator. Voters recently chose to place a commission over the long publicly unaccountable DPW,  further reducing the City Administrator’s authority.

Prior to Prop G tenant groups were unable to even get a meeting with CAO Rudy Nothenberg to discuss the city’s lack of housing code enforcement. We did a protest at his City Hall office where we chanted for him to come out and banged on his door. He still refused to meet.

Like democracy itself, commissions are not perfect. DBI’s commission is unique by requiring designated seats. The seats reflect DBI users, the idea being that those with knowledge of DBI’s workings could provide effective oversight and policy guidance. In building support for charter reform we heard from a lot of people critical of planning commissioners’ lack of required experience in the field; we were urged to have people who “knew what they were talking about” on the DBI commission.

One designated seat is for a tenant, which has contributed to the agency’s support for tenant protections. In contrast, the Planning Commission rarely has a tenant member. Nor do most city commissions (the Rent Board mandates an equal tenant-landlord split despite there being far more tenants than landlords in the city).

The current tenant seat is held by Alysabeth Alexander Tut, who spent years organizing SRO tenants and Latino families for the Tenderloin Housing Clinic. She shared with me her concern that a change in DBI’s governance would hurt tenants: “I often get calls from tenant rights groups throughout the state asking how to make their building inspection department as tenant-friendly as San Francisco. People often forget that San Francisco has an entire division dedicated to enforcing habitability standards for tenants. The Housing Division partners with community-based organizations that educate and outreach to tenants about their rights, and landlords about their responsibilities. That partnership has been crucial throughout the pandemic, as the Housing Inspection division and community partners educated and enforced public health guidelines to prevent major COVID breakouts in SRO hotels. The tenant voice is crucial to protecting tenant rights and habitability standards. Let’s not throw the baby out with the bathwater.”

DBI’s Commission also includes a landlord seat. DBI has combined its protection of tenants by targeting bad landlords rather than the vast majority of good landlords without housing code violations. The targeting of slumlords did not occur prior to DBI’s creation in 1995.

Some believe that DBI’s governance should be shared with Planning. But combining two large organizations and having it supervised by one commission rather than two decreases oversight. Oakland has such a system. Think it stops corruption?

In late September the Oakland Public Ethics Commission “issued a fine of $309,600 against a former city building inspector accused of accepting bribes from property owners in exchange for greenlighting inspections or issuing permits.” There were 47 violations. Notably, Oakland has a combined Planning and Building Department that some erroneously think would be an improvement upon the DBI.

I haven’t seen a single article pushing for new governance of Oakland building inspectors in light of this massive inspector corruption.

In addition to implementing the compliance and consumer protections called for by Supervisor Ronen, DBI’s acting director O’Riordan has taken many other steps to prevent the misuse of inspectors that has been associated with staff corruption.

For example, inspectors are no longer allowed outside of their districts unless assigned by a supervisor. To ensure inspectors don’t get too cozy with the owners in their district, inspectors will be rotated on a regular basis.  Division managers will perform spot checks on inspections and senior inspectors will review reports. And to close an order of abatement in a housing case it must be signed off by the Chief Housing Inspector.

This is just one of many of DBI’s Reform Initiatives to stop corruption. Together they create a stronger system of checks and balances than existed before. Does this guarantee that no DBI employee engages in personal corruption? No. But no system can guarantee against that. All DBI can do is implement as many safeguards as possible to deter wrongdoing and make it easier to detect.