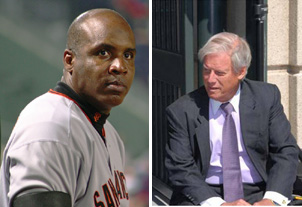 When SF Giants owner Peter McGowan bid against himself to pay Barry Bonds $15-$18 million for 2007, Giants fans and the sports media expressed outrage that the team would delay rebuilding to focus on a homerun chase. But sold-out games and the media’s obsession with Bonds shows that McGowan understood how Bonds would take attention from the team’s poor performance. What other losing team has its tickets up for bid on e-bay? What other media market would spotlight the pursuit of a record that is seen as questionable, if not invalid, by most serious baseball observers? Why has a city and region that prides itself on facing facts, and not being diverted by glitz and hype, bought hook, line and sinker into the marketing package of the SF Giants and Barry Bonds?

The same San Franciscans who (correctly) believe that George W. Bush lives in a world of unreality have joined him in that world when it comes to Barry Bonds.

As Bob Costas recently discussed, there is no reasonable non-steroids explanation for Bonds’ homerun production increasing dramatically after age 35. Only fans desperate for something to cheer about, or oblivious to the facts, could possibly root for a cheater to overtake current record-holder Henry Aaron.

But far more troubling than Bonds idolatry is the way that fans and the media have made baseball not about winning, but about record-setting.

Few get excited when a pro basketball player scores at will with his team down by 30 points in the 4th quarter to achieve a scoring record. Basketball is said to be about winning, not personal stats, and when Kobe Bryant goes for 70 points and the Lakers lose, he typically gets blame, not applause.

But as McGowan clearly understood better than others, most Giant fans are willing to accept a losing team so long as they can watch Barry swing for the record. And our local media is giving more coverage to the Giants due to Bonds than would be seen if the team were battling for first place—in a lineup without the often-sullen superstar.

According to media reports about Monday night’s home game against the Braves, an estimated 5000 fans began leaving the park after Bonds’ last at bat—even though Ryan Klesko was batting with the tying run to the plate. The Giants have created a fan base that comes to watch an individual record, not root for a team.

McGowan also understood that the frenzy to see the record broken would not end when Aaron is passed. No way. Barry will be potentially breaking a record every time he steps to the plate after hitting number 756—and what Giant fan would not want to give their kids a chance to view history, even if third-deck seats cost $50 a pop?

As many have pointed out, Giant fans have “enabled” a situation where the team is 24 guys standing around waiting for Bonds to break the record. Fan focus on Bonds also allowed Sabean-Baer-McGowan to put a team on the field in April that everyone knew was deeply flawed, but nobody cared in a season that was to be all about Barry’s record.

The only case from the world of sports that comes close to that of Bonds is Cal Ripken’s pursuit to exceed Lou Gehrig’s consecutive games streak. But while Ripken is more like Bonds than people realize (he stayed in separate hotels, and was entirely disconnected from teammates), his streak did not provoke the passions surrounding Bonds, either measured by media coverage or increased attendance.

As a friend pointed out, when the Reverend Jesse Jackson showed up to pray for Bonds’ to break the homerun record, you knew that all of the marketing boundaries had been removed. San Francisco has entered a world of hype that will make Karl Rove recall the good old days.

The author became a fervent Giants fan in 1965. Send feedback to rshaw@beyondchron.org