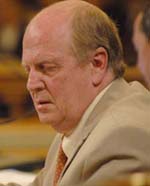 A group of Richmond District residents and merchants will hold a campaign kickoff today for the recall of Supervisor Jake McGoldrick. While anger at McGoldrick’s mistreatment of speakers at public hearings, his rambling discourse that delays committee hearings, and his conduct toward the Trinity Plaza project is understandable, the recall is a very bad idea. If successful, it would enable Mayor Newsom to pick a replacement, who would then have a major edge in winning the seat in the November 2008 election. Recalling McGoldrick with only a year left in his term would distort next year’s District One race, depriving voters of their right to elect a new supervisor who was not given incumbency status by the Mayor.

Having written more pieces critical of Supervisor Jake McGoldrick than any other journalist, I am very well aware of his shortcomings. But recalling him makes little sense when it would only cut short his term by a single year, but would deprive District One residents of a fair and equal playing field for selecting their next Supervisor.

What’s interesting about the recall effort headed by Richmond Review editor Paul Kozakiewicz is that it target McGoldrick for positions that find support among most San Franciscans. This includes his support for Healthy Saturdays, for which a compromise satisfying all parties has been reached. Recall backers also are angry over McGoldrick’s support of a Geary Street Bus Rapid Transit, which would be strongly supported by San Francisco’s pro-environment electorate.

One area where McGoldrick failed to get constituency input was his effort to impose the same inclusionary housing requirements on small contractors that are required of large downtown developers. Many of these small contractors are Asian-American residents of District One, who felt that McGoldrick sponsored a measure that could put many of them out of business without even soliciting their input.

These contractors are understandably angry with McGoldrick. But they should target this anger toward electing someone in 2008 who will listen to them, a situation made less likely if a successful recall results in a new supervisor who is primarily beholden to the mayor.

In many respects District 1, primarily the Richmond District, has a political culture resembling District 3, North Beach-Chinatown. Both are heavily tenant areas (though more moderate politically than the Mission or Western Addition) where small landlords and merchants also have important clout.

A smart supervisor like Aaron Peskin in District 3 works hard to address his district’s diverse components. A less skilled Supervisor like McGoldrick ignores the views of people he disagrees with, and leaves much of his constituency feeling unrepresented.

The interesting question is why, if McGoldrick is as out of touch with his district as recall proponents say, he won re-election easily against a prominent opponent, Judge Lillian Sing, in 2004. McGoldrick’s behavior at committee meetings was no better during his first term, and he already revealed himself to be a strong public transit advocate.

McGoldrick’s victory in 2004 was greatly helped by the atrocious campaign run by Sing’s campaign manager, Eric Jaye. But there is no question he had a loyal base in his district, and these folks will be out in force to defend Jake against the recall.

The thought of recall proponents making a political martyr out of McGoldrick should alone deter people from signing the recall petitions. This is a guy who will love the role of the politician attacked by business interests because he stood up for car-free Saturdays in Golden Gate Park, and for a more efficient transit linkage between the Richmond and downtown.

It is relatively easy to qualify a recall for the ballot—it only needs the signatures of 10% of the registered voters in the district, or 3600 for District 1— particularly when business interests are around to fund the effort. So the fact that the campaign is being launched today could well mean that McGoldrick will end up facing the voters in a recall election.

When the recall fails—as it likely will—proponents will have accomplished two things.

First, they will have given Jake McGoldrick an exalted status he never would otherwise have achieved.

Second, they will have revealed their own political weakness, hurting their ability to sway not only the District 1 supervisor, but also the entire Board and Mayor.

Should the recall succeed, proponents will get little benefit. Mayor Newsom will pick someone whose primary quality is loyalty to the mayor, not to the recall proponents.
The “message” they are hoping to convey about political accountability and their own political clout will not be heard, as politicians will interpret the recall as specific to McGoldrick’s idiosyncrasies.

The real winner in the recall will be Mayor Newsom. He rids the Board of the only Supervisor who called for his resignation over the Rippey-Tourk sex scandal, and gets to appoint his replacement.