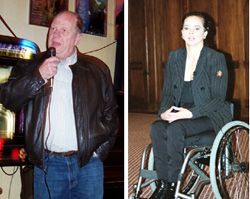 In a hearing that recalled right-wing attacks on the Americans with Disabilities Act, San Francisco Supervisor Jake McGoldrick used Wednesday’s Land Use hearing to repeatedly question the need for elevator access to rooftop decks. McGoldrick argued that elderly and disabled people, including people with AIDS, do not necessarily need elevators and sharply questioned those claiming otherwise. McGoldrick not only seemed unaware of the city’s legal obligations under the ADA, but spent 90 minutes looking for ways to circumvent the law before requesting an indefinite continuance so that disabled Supervisor Michela Alioto-Pier–the measure’s sponsor– could appear before the committee to answer his questions.

On Wednesday,the San Francisco Board of Supervisor’s Land Use committee held a hearing on legislation to conform the city’s Planning Code to meet state and federal access laws. The measure would allow a height limit increase of 16ft so that elevators could go directly to the roof, thereby providing equal access to persons unable to climb stairs.

Based on what occurred at the hearing, it is clear why San Francisco keeps getting sued for violating the ADA. A simple amendment to bring the city Planning Code in comformity with the Building Code and state and federal law became the subject of a hostile attack on disability rights by Supervisor Jake McGoldrick.

Not a single member of the public testified against the amendment, sponsored by Supervisor Michela Alioto-Pier. Speaking for the amendment were representatives of the Planning Department (the Commission approved it by a 6-1 vote), Building Department, Mayor’s Office on Disability, the Mayor’s Council on Disabilities (which endorsed it unanimously), and disabled members of the public.

Without any speakers against the measure, McGoldrick was left with asking why a few people had spoken against it at the Planning Commission. Although the Supervisor was told that nobody with technical expertise had disputed that state and federal law required the passage of the amendment, he continued to act as if this fact was in question.

McGoldrick also inquired why Planning Commissioner Hughes voted against the amendment, but did not inquire why the other six commissioners approved it.

McGoldrick interrogated representatives of the city’s disability staff on the percentage of disabled people in SF, the number of physically disabled, the real need for elderly and people with AIDS to use elevators, and similar questions that should embarrass all San Franciscans. Susan Mizner of the Mayor’s Office did a brilliant job trying to correct the Supervisor’s many misconceptions about the ADA and disabled people in general, but McGoldrick clearly was not interested in the problems of people with disabilities.

McGoldrick even displayed no understanding of the type of alterations that trigger ADA requirements. He asked if a kitchen renovation would require an owner to make major elevator alterations, but no matter how carefully the DBI official tried to explain the law to McGoldrick, little progress was made.

McGoldrick’s behavior was apparently prompted by the Planning Commission testimony of a handful of Telegraph Hill Dwellers that the amendment would allow views to be blocked in their neighborhood. But the Dwellers apparently thought that the “elevator-penthouse” amendment involved a habitable penthouse— the penthouse is really the size of a henhouse— rather than an uninhabitable mechanical room.

Although nobody from the Dwellers attended the hearing, McGoldrick was apparently so beholden to them that he suggested reducing the ceiling heights in 40- foot high buildings in order to provide elevator access to the roof. When Planning staff said this could not be done, he suggested that roof decks could be foregone altogether and that rear yard access was sufficient open space.

Disabled activists have two choices in response to McGoldrick’s chicanery (the ever polite Supervisor Maxwell was the only other member present, with Supervisor Sandoval, who surely would have challenged McGoldrick’s behavior, absent).

First, they can sue the city, further tarnishing our image as a bastion of civil rights. Given the fact situation of the city trying to stop a builder from complying with the federal ADA, this case is a slam dunk.

Second, they can wait two weeks to see if Alioto-Pier can talk some sense into her colleague.

As I told the committee, the current Planning Code would even deny disabled Supervisor Alioto-Pier her legal right to attend meetings and social events on rooftop decks. This is not Mississippi in 1963, and Mayor Newsom and other Supervisors must step in to prevent this outrage.