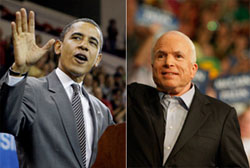 Tonight is the second presidential debate, and John McCain vows to “take the gloves off.” As Sarah Palin telegraphed over the weekend, this means the Republican nominee will tell a nation shaken by economic worries that this election is instead about Barack Obama’s past relationships with Reverend Wright, Bill Ayers, and the Democratic nominee’s allegedly defective character. But McCain’s strategy will backfire. McCain turned off undecided voters in the first debate because of his rude and condescending demeanor toward Obama, and his failure to address the problems of working people. Now he pledges to be even nastier, and to substitute character and cultural issues for policies that will help the middle-class. McCain strategists have forgotten that Ronald Reagan and George W. Bush always told working people on the campaign trail that they understood their economic problems better than the Democrats, and were champions of the middle class. In choosing to avoid the economic crisis to engage in personal attacks, McCain is ignoring this winning strategy and engaging in political suicide.

As John McCain seeks to rejuvenate his campaign with a smashing victory in tonight’s debate, the event will likely instead end with his presidential campaign in tatters. With unemployment at five-year highs, the stock market at four-year lows, and public confidence in the Bush Administration at an all-time low, McCain plans to downplay these problems and instead raise questions about Barack Obama’s character.

This is a truly foolish idea for many reasons.

Obama, not McCain, Has Been Vetted

First, McCain’s attacks are old news. Having survived the Reverend Wright videos, the comment about “elitism,” and the notorious Stephanopoulos-Gibson debate, Obama entered the general election campaign having been fully vetted.

McCain’s advisors seem to think that the Bill Ayers connection to Obama still has legs because the New York Times put it on the front page this weekend in a very lengthy story. But while Palin cited the Times in charging Obama with “palling with terrorists,” she apparently did not read it–because it completely exonerated Obama from any negative associations from his dealings with Ayres, a current university professor.

Second, McCain’s attack strategy will fail because his overwhelming goal is convincing voters that he can best address their economic concerns. Every debate answer that gets away from this message is a wasted opportunity, leading more viewers to conclude that McCain does not understand them.

Third, if your past history includes rabid support for deregulation and membership in the Keating 5–the five Senators whose controversial relationship with Savings and Loan speculator Charles Keating contributed to the taxpayers multi-billion dollar 1987 S&L bailout–you might think twice before bringing up Obama’s past connections.

Unlike Obama, John McCain has not been fully vetted. Many voters do not know about his role in the nation’s previously most costly financial institution bailout, or about his living with his current wife while still married to his first wife (who was disabled.)

The Los Angeles Times reported on October 6 that “mishaps mark John McCain’s record as naval aviator,” delving into a part of the nominee’s background that even Karl Rove bypassed in his scorched earth primary campaign for George W. Bush against McCain in 2000. The Times story portrays the young McCain as erratic, undisciplined and a risk-taker, a characterization some have seen manifested in his “suspending” his campaign and selection of Sarah Palin.

Paul Begala, the former Clintonista who has become CNN’s most effective Obama surrogate, raised an issue on October 5 about McCain’s membership in 1981 on the Board of Directors of a group the Anti-Defamation League found to promote racism and Anti-Semitism. Begala noted that he would never charge McCain with such hateful views, but that once the Republican wanted to focus on past connections, this association would also become fair game.

Although the first debate occurred when all focus was on the bailout, John McCain spent the night emphasizing his refusal to withdraw troops from Iraq. In other words, he ignored the central public issue so that he could identify himself with an unpopular stance.

Tonight, with the electorate even more insecure, McCain will again ignore kitchen table issues to focus on character attacks. But if such attacks backfired in the first debate, why would they succeed tonight?

It recalls the idea that the definition of insanity is doing the same thing over and over and expecting a different result.

Conventional wisdom says that Republicans win by getting working people to put cultural and religious concerns ahead of their economic self-interest. But this obscures the more complex truth that Reagan, Bush and others actually campaign as champions of the working and middle-class.

Reagan or the Bush of 2000 would never have ceded the terrain of economic anxiety to their opponents. John McCain has ignored this message, and plans to dig himself an even deeper hole tonight.

“Straight talk” was once the McCain brand. His reputation for substance even led me to predict on April 21 that McCain would campaign on issues rather than try to undermine Obama’s credibility.

I sure was wrong about that.

McCain is running the worst strategic campaign in modern Republican presidential history. If Karl Rove really is behind the curtain pulling the strings, than his reputation, like Alan Greenspan, Colin Powell and other onetime “geniuses,” is the latest casualty of the Bush era.

Randy Shaw is Editor of Beyond Chron and author of the newly released, Beyond the Fields: Cesar Chavez, the UFW and the Struggle for Justice in the 21st Century (University of California Press)