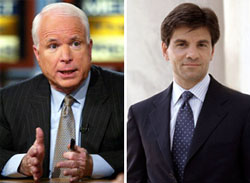 In defense of ABC focusing last week’s Clinton-Obama debate on “gotcha” questions involving flag pins, Reverend Wright’s patriotism, and the Weather Underground, George Stephanopoulos argued that they had “gone to the heart of the ‘electability’” question and also showed “how candidates handle controversy.” But those who believe the 2008 general election will echo the 2000 and 2004 races in prioritizing symbolic over substantive issues do not understand John McCain. George W. Bush was intellectually incapable of running on policies and action plans, and had to rely on Rovian political tactics and voters identifying with his religious and cultural views. In contrast, McCain views himself as a policy guy. He truly believes he can win in November by convincing voters that he has superior policies on Iraq and the economy. McCain will not focus on the type of “credibility” issues that Hillary Clinton has used to unsuccessfully attack Barack Obama, weakening the Clinton camps argument that Obama will fall prey to “gotcha” issues in November.

While conservative pundits defended the debate questions last week on the grounds that elections are often decided on such “gotcha” issues, nobody appeared to be asking if this would be part of John McCain’s campaign strategy. Rather, there was a consensus that Republicans always seek to frame elections around non-substantive issues, and frequent mention was made of 1988 candidate Michael Dukakis paroling Willie Horton and the “swiftboating” of John Kerry in 2004.

McCain is not George Bush

But there are two critical differences between the 2008 election and those where non-substantive issues played major roles.

And in neither of these years was the United States also mired in a trillion-dollar war.
Second, John McCain resembles Ronald Reagan in that he truly believes in his policies. His proposed solutions to the nation’s problems are no more effective than those offered by Reagan, but McCain has a fervent desire to persuade Americans to adopt his prescriptions for the country.

McCain has adopted Bush’s policies, but not the latter’s contempt and incapacity for policy discussion. McCain believes he can defeat Barack Obama on the merits, seeking to accomplish something that Hillary Clinton was unable to do.

Clinton Turned Away From Issues

Remember when Hillary Clinton’s campaign theme was that she would be best ready to govern “ON DAY ONE”? This omnipresent message has disappeared – because it did not prove effective.
Clinton then turned to Obama’s lack of qualifications to be Commander in Chief. Remember all the talk from the Clinton camp that he had not “passed the Commander-in-Chief threshold”? That message also disappeared—because it failed.

Clinton then turned to the alleged deficiency of Obama’s health care plan. Remember when she spent much of one entire debate trying to prove Obama’s plan was not “universal”? The message about Obama’s allegedly flawed health care proposal has not disappeared entirely, but it is rarely heard.

Having failed to overtake Obama through her main lines of attack, Clinton turned to what her own campaign described as the kitchen sink strategy. That’s when issue-focused arguments were replaced with vitriolic charges about Samantha Power, the disputed Canada NAFTA meeting, Clinton publicly announcing “Shame on You, Barack Obama,” and the 3:00am phone call.

Hillary Clinton stated prior to the first primary that she thought negative campaigning was “fun.” Or as Obama told an audience the day after the recent non-issue debate, Clinton was “in her element.”
Clinton realized in late February that all her campaign had left was the argument that she had “weathered Republican attacks for 16 years,” and that unlike Obama, she had been “vetted.” To prove this point, she and her media allies had to launch non-issue based attacks at Obama at every turn, justifying such behavior on the grounds that “this is what Republicans do, so get used to it.”

But this is not John McCain’s history, or his agenda.

McCain to Campaign on Issues

Few Senators over the past two decades have played leading roles in such a diverse array of important issues as John McCain. From campaign finance reform to immigration reform, McCain has tackled more complex policy issues than any other Republican during this period.

Now this self-identifying policy wonk has a chance to promote his vision for America to win a trip to the White House.

John McCain clings to a vision of himself as a statesman, not a win at all costs politician. He does not want to spend debates talking about Reverend Wright, flag lapel pins, the Weather Underground, whether the white working class is “bitter,” or what Michelle Obama meant when she said she had not been proud of America for a long time.

The great irony of Clinton’s attempted “vetting” of Obama is that the general election will be fought by two candidates who favor substantive policy discussion over personal attacks. This may bore a cynical traditional media, but it offers voters a rare chance to witness, and participate in, a national policy debate over the nation’s future.