McCain, Mormons and Other Scary Monsters 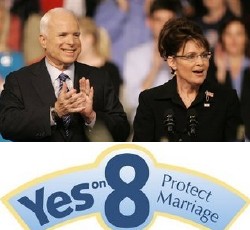 It’s fitting that the election comes only four days after Halloween. With this year’s line up of eerie hopefuls and evil ballot initiatives, November 4 may end up being scarier than anything that can happen on October 31. In the presidential race, there’s John McCain and Sarah Palin, perhaps the most ghoulish pairing ever to rise out of the many levels of Hell that is the Republican Party. No one can convince me that McCain wasn’t put together from body parts found in the local graveyard. The only problem is that Dr. Frankenstein forgot the brain.

Sarah Palin is a Barbie doll secretly zapped to life by some feminist intent on getting a woman into the second highest office in the land, only the process was interrupted by a broadcast of the 700 Club. Thus, she has the body and hunting skills of Wonder Woman, but talks like Phyllis Schlafly, the anti-feminist founder of Eagle Forum. Even $24,000 worth of makeovers per month (by a team of gay makeup artists, no doubt) isn’t making her any more appealing to American voters than George Bush in a g-string.

In California, there’s Proposition 8, the antigay marriage initiative that has garnered national attention, not to mention a lot of money from the same religious ilk that gave us the Inquisition and the anti-Jewish pogrom. Nothing could be more spine-chilling than Mormons and the Roman Catholics joined together in an unholy union to spread bigotry and hatred throughout the land. Something they have a lot of expertise at. Both religions had to be dragged, kicked and screaming into accepting the basic civil rights of African Americans.

The low point in the Yes on 8 campaign came when kids were trotted out to sing a homophobic song for an Internet video. And the devil shall gather his armies, as the Morons, err, Mormons, say.

By far, though, San Francisco has the most gruesome collection of spooky creatures ever assembled by the forces of the dark side. They call themselves by various names: Chamber of Commerce, Board of Realtors, Plan C, etc. They are the creepy crawlies that funnel money into local ballot initiatives to defeat neighborhood and progressive candidates for the Board of Supervisors. They find zombies to do their bidding, pushing such inconceivable horrors as more profits for wealthy landlords and big developers.

Their targets this year: Eric Mar in District 1, David Chiu in 3 and John Avalos in 11. The only way a mere mortal can defend himself is by working his butt off to elect Mar, Chiu and Avalos. There’s still time to phonebank or walk a precinct. Get in touch with their campaigns.

Halloween only lasts for a day, but ghouls such as McCain and Palin are around for four or eight years.

Elections are not for the faint of heart.