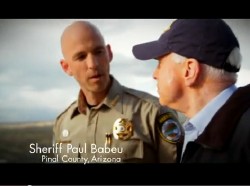 Under attack from the Teabagger wing of the GOP, Senator John McCain has a new campaign ad to prove his anti-immigrant credentials – along with a corny website, at completethedangedfence.com. The TV ad – shot in the border town of Nogales, Arizona – shows McCain talking with Pinal County Sheriff Paul Babeu about the need for tougher border security. Nogales is on the Mexican border, but it’s in Santa Cruz County – not Pinal County, which is 115 miles north in central Arizona. Meanwhile, the Santa Cruz County Sheriff who’s job would be to enforce the law in and around Nogales has been quite critical of Arizona’s race-baiting policies, such as the recently passed SB 1070. “Local law enforcement has a great relationship with the Hispanic community,” said Sheriff Antonio Estrada about the new law. “Something like this is really going to scare these people.” McCain strongly supports SB 1070.

The Sheriff of neighboring Pima County (which covers a large swath of Arizona’s border with Mexico) was even more blunt. Calling the law “racist,” “disgusting” and “stupid,” Sheriff Clarence Dupnik has gone so far as to say he will order his deputies not to enforce SB 1070 – even though it subjects such law enforcement to liability if they don’t start racial profiling. Somehow, I doubt Sheriffs Dupnik or Estrada will appear in a McCain campaign ad soon – even if the Senator insists on using Nogales as a backdrop.