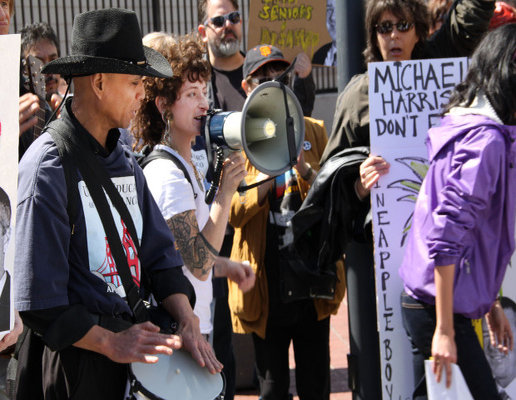 On September 3, Benito Santiago, 64, a senior and public school teacher, received notice that his Ellis Act eviction had been rescinded. Santiago and his 2 neighbors were involved in an over 8 month struggle against real estate speculator Michael Harrison, a co-founder of Vanguard Properties, who, like many other serial evictors, was using the Ellis Act to evict rent-controlled tenants and flip the building.

Through the passionate efforts of Santiago’s legal team at the Tenderloin Housing Clinic and the countless activists with Eviction Free San Francisco that attended demonstrations and direct actions, Santiago was able to stay in his home.

But even with his Ellis Act eviction case won, Santiago is still not guaranteed security against eviction. Harrison has already listed the building, 149-151 Duboce, on the market and showed the building to potential buyers last week. The building was listed for an incredibly high price of $1.5 million but was reduced to $1.4 million after just a week on the market. While potential buyers may be deterred from purchasing the building because of the precedent that was set with the Ellis Act victory and the enormous media coverage surrounding the property, there is no way to prevent another owner from trying to evict Santiago.

“It’s a scary situation that it’s back on the market,” Eviction Free San Francisco organizer Manissa Maharawal said. “We stopped one Ellis Act eviction, but we want to preserve it for the long-term as affordable housing for the people that live there.”

Members of Santiago’s support team with Eviction Free San Francisco believe that the best way to prevent future evictions is to purchase the building themselves and take it off the speculative real estate market.

“The building is being listed as an ‘investment opportunity,’ and we know that means they will try to speculate on it. There’s no way someone can purchase at that price without having to evict someone,” Maharawal said.

They are working with the San Francisco Community Land Trust in an effort to find funding for Santiago and the 2 other tenants to purchase the building together. The SFCLT was started in 2003 and has preserved 5 other properties to date. The land trust model is one of best tools for creating permanently affordable housing as it, in many cases, restricts resale prices to predetermined levels, mostly to account for inflation. With this model, Santiago’s building would be able to be converted into a limited-equity co-op and thus would be part of the city’s affordable housing stock forever.

The SFCLT believes they can secure around $600,000 in financing options but will need to either fundraise or get money from the Mayor’s Office of Housing’s newly created Small Sites Program for the remaining $1 million needed. The program was started last month as an effort to curb real estate speculation and currently has $3 million in funds, but none of the funds have been allocated yet.

“With Mayor Ed Lee’s newly launched Small Site Acquisition Loan Program, we may actually be able to compete on the private market to buy the building and stabilize it as permanently affordable housing for lower income residents,” Tracy Parent, Organizational Director of SFCLT said.

Santiago’s building would be an optimal first case for the program, but his 4-unit building falls just short of the 5-unit minimum of the program. The MOH has agreed to review the application despite this, and Parent is hopeful that the city will grant them funding to protect Santiago and his neighbors.

“This new program will provide low-cost loans for the acquisition of small apartment buildings at-risk of losing their affordability or of displacement due to real estate speculation,” Parent said.

Putting the Santiago’s building in a land trust would allow the building’s tenants to establish a cooperative and begin managing the building themselves. This model of social ownership is generally considered to be one of the best options at securing long-term affordable housing in the city. The city’s Small Sites Program may prove to be the best option at securing the enormous amount of money to purchase the building.

Given the kind of buildings the program was intended to work for, Santiago and his neighbors have a good chance of getting funding, but will need political support from city leaders and continued pressure from the community.

“With rising evictions in San Francisco, the city has an opportunity to save and preserve affordable housing through its Small Sites Program,” said Ted Gullicksen of the San Francisco Tenants Union.