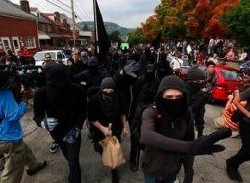 Being under siege by the National Guard, Coast Guard, and out-of-state police isn’t totally normal for a city. But this is the current climate here in Pittsburgh, Pennsylvania, hot spot for the G-20 Summit. Because Pittsburgh boasted a roster of a mere 900 police officers in 2007, the city’s sudden show of force is unbecoming to say the least.

I’ll be honest: I was not planning on responding in any way to the G-20 summit this Thursday and Friday … except maybe skip town and avoid it altogether. After all, what bothered me the most about the event wasn’t even its political nature (which isn’t to say that it’s not still frustrating); I just knew the whole thing would be a nuisance to activists and non-activists alike.

And it has been. To just about everybody. In recent weeks, our small, quiet city has been disrupted because a few important people needed a place to – as my friend’s seemingly apolitical father described – “figure out new ways to screw us over.”

This week, the drone of Apache helicopters regularly drowns out conversation. Traffic is thoroughly upset and rerouted all over downtown, where the majority of businesses are closing for the G-20. Some businesses in the rest of the city are closing as well, due to the unfounded fear that protesters are from a breed that indiscriminately smashes everything they see. Everyone is afraid, and suddenly it’s not about the G-20 at all, but rather the scary people opposing it.

While many individuals (from within Pittsburgh and without) have been mobilizing against the G-20, my plan was to lay low and wait for the whole thing to blow over. But I found that particularly difficult at 1:30 on Monday morning when 35 officers with guns surrounded my house. My housemates and I had just finished watching a movie and were getting into bed (as a few of us had been feeling under the weather) when we saw a bright light flash in the windows. By the time I could pull my pants on, three cops had wandered into the back yard and were shining their lights in the back door.

I ran outside and said, “What’s going on?” They replied, “You tell us.”

Now these people had roused everyone in the middle of the night, barged into our yard, and then were asking me what was going on – as if I would say, “Actually, officers, we were just about to commit a bunch of crimes; thank you so much for stopping us. May as well take us to jail anyhow, though. Just to be safe.”

In reality, they asked me if I legally resided at the house. I said yes. Then they asked who owns the house. As I was telling them that the owner lives with us, Dan – the owner – stepped outside. I think this surprised the police, who were probably hoping for an excuse to come in.

If we couldn’t prove our legal residency, then they would have had carte blanche to do whatever. Why? Because Mayor Luke Ravenstahl has declared a state of emergency, which means that anything goes. (What is the emergency? Well, it hasn’t happened yet.)

Dan went upstairs to get the deed, and we met the police out front. That’s when we realized that six police cars and one truck marked “City of Pittsburgh” lined the street, bumper to bumper, from one end of the block to the other. Several dozen officers stood outside of their vehicles, brandishing shotguns – which was eerily reminiscent of the scene in bank robbery movies where they’ve got the place surrounded and are just waiting for the crook to turn himself over.

So if by now I’ve got you worked up, well, don’t worry – as soon as Dan showed them the paperwork, which indicated that the police had been trespassing on his property, they eased their tone and explained that there must have been some kind of “mix up.”

“Must have scared a year of your life!” one officer joked – as if we would all start laughing at what a funny “mix up” it had been that night as 35 armed police occupied my street.

They were about to walk away with their tails between their legs when I asked again what this was all about. They said, “Well, you know the G-20’s coming,” as if that were explanation enough.

“Well, you were placed on a list,” one officer said.

Then he changed his story about the list and insisted that someone had just called the police that night because they saw “some activity” going on. “People coming in and out,” he said.

“Like, the people that live here?” Indeed, the only people home were our housemates, my significant other (who is kind of like a housemate), and another friend who had been there to watch the movie earlier.

The officers urged us to “get to know our neighbors better,” and they turned to leave.

I ran upstairs to get my camera to photograph the police procession as evidence, so they shone their searchlight in my window to make the photo impossible. Then they drove off.

Three days have passed now since this incident, and the thing that sticks with me the most is how rude it was. It was rude to arrive at 1:30 a.m., and it was rude to bring seven cars. It was also rude to have enormous guns.

But what I do not understand is how excessive it was. To me, that does not say, “We’re doing this for your own safety.” No, instead it chortles, “We know where you live. Are you scared yet?”

Unfortunately, mine was not the only incident of police harassment this week. The ACLU is already working on a lawsuit against the police (many of whom were imported from other cities and states) for harassing Seeds of Peace and the Three Rivers Climate Convergence. And all the while, the cops continue to bang on doors, seize bicycles, make preemptive arrests, and invade privacy.

It’s worth noting that Pittsburgh is not used to feeling international attention, nor is it used to witnessing this scale of protest. And because people don’t know what to expect, they expect the worst. The city government, the police, the residents, the resident-protesters – everyone expects the worst, and I wonder if we’re all just manifesting it.

In honor of the G-20, Mayor Ravenstahl commissioned lamp-post banners downtown with the message, “Pittsburgh Welcomes the World.” But when police make Pittsburgh residents feel unwelcome in their own city, the banners just read more like an unfunny joke.