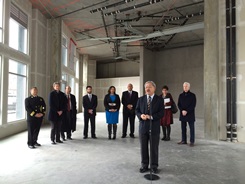 San Francisco Mayor Ed Lee declared on February 6 that San Francisco will become the first city in the nation to prioritize housing developments at every stage of the planning process based on their affordability. The new policy gets affordable housing projects into construction 3-5 months earlier, and saves taxpayers over $2 million per year. Most importantly, Lee’s plan creates powerful incentives for private developers to increase their on-site inclusionary affordable housing requirements from 12% to 20% and offsite from 20% to 30%; they either agree to the mayor’s higher numbers or go to the back of the line.

Since taking office with unemployment near 11%, San Francisco Mayor Ed Lee prioritized job creation, bringing unemployment under 5%. Now the Mayor is focusing on housing. He has pledged to build 5000 housing units a year for the next six years, and to dramatically increase the number of affordable units—a tall order for a city known for its planning process logjam.

The Mayor’s February 6 press event at 1600 Market was a follow up to his December 18, 2013 housing directive. This directive created a multi-agency working group to prevent further loss of affordable and rent-controlled housing, and also laid the groundwork for the mayor’s plans to speed affordable housing development.

Understand what the mayor is doing here. Instead of battling with for-profit developers over raising the percentage of affordable units 20% on-site and 30% off-site, he is offering them a choice: they can continue to do the current 12% on-site and 20% offsite, and they can also continue to avoid adding affordable units by instead paying the city an in lieu fee. But if they choose those options, they go to the back of an ever lengthening line at planning.

Developers eager to see their projects get approved are likely to see the wisdom of the higher inclusionary amounts. After all, they are paying interest on their land from the time they acquire it, and given the city’s high land costs, delays are costly.

So Mayor Lee’s incentives will increase inclusionary housing without having to wait months for Planning Commission or Board of Supervisors approval.

And keep in mind that priority will be given throughout the review and entitlement process – from assignment, to initial review, environmental review, to design and plan check, to entitlement hearing. When multiple projects qualify for the expedited review process, those projects with the greatest percentage of affordable units will be processed first.

The Planning Department estimates that developers agreeing to the higher affordability will save from 3-5 months. This saves taxpayers an estimated $340,000 per nonprofit affordable housing project in cost savings. Since MOH has produced 6 affordable housing developments per year, this allows the city to save $2 million per year.

For-profit developers whose land costs are likely higher will save far more than $340,000 per project. The Mayor smartly chose a number that few developers will be able to resist, while effectively lengthening the process for those who refuse the incentive.

The Planning Department will require property owners seeking to remove illegal dwelling units provide findings as to why they are removing, rather than legalizing, the unit; and consider these at the Planning Commission through a Mandatory Discretionary Review Hearing.

There is strong Board support for finally legalizing in law apartments, but that would not protect units the owner seeks to remove. That’s why Mayor Lee’s new policy is critical, and long, long overdue.

The Planning Department will also initiate mandatory Discretionary Review for the loss of any dwelling units, legal or otherwise; and recommend preservation of any units where there is a feasible path to legalization.

The Department of Building Inspection is also acting to prevent owners from eliminating legal units. DBI is creating a new housing checklist that will ensure further review for any projects that will result in loss of housing units or displacement of tenants. DBI will also ensure that such permits are not approved over-the-counter.

Whenever the Mayor announces a new housing initiative, there are some who downplay it because “more must be done.” But more is being done, including the city working to secure political support for an Ellis Act holding period, winning new public housing funds, and local measures at the Board of Supervisors. The Mayor will soon introduce reforms to the city’s inclusionary housing law designed to increase affordable family housing, and affordable housing overall.

It’s hard amidst rising Ellis Act evictions, skyrocketing rents on vacant units, inadequate money for building nonprofit affordable housing, and an historically slow planning process for many not to get incredibly frustrated at the pace of change. But the good news is that on many issues—particularly Ellis evictions and the slow planning process—long overdue action on core housing problems is finally being taken.