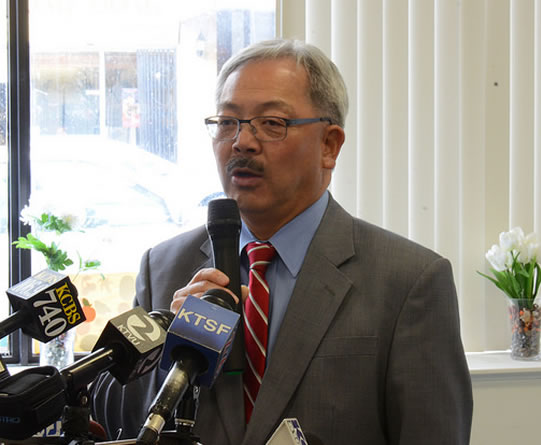 San Francisco is about to get a new museum that aims to educate the world about its least understood neighborhood.
On Monday, April 21 Randy Shaw, Executive Director of Uptown Tenderloin, Inc. (and editor of Beyond Chron told the gathered crowd of reporters, city officials, investors, residents, and community organizations that in the decade following the 1906 earthquake the Tenderloin was the Paris of America.

Located at 398 Eddy Street, the Tenderloin Museum will sit in the heart of the Tenderloin. It is slated to open in early 2015 and it will provide an array of attractions, including a permanent exhibit of photographs and original objects, neighborhood tours that come with the cost of admission, public nighttime events, and a café.

Mayor Ed Lee and District Six Supervisor Jane Kim were only a few of the luminaries that turned out to celebrate the museum’s kickoff. “I want to congratulate Randy. When someone says, ‘Nah, the Tenderloin will never change,” he points out that we have great capital in the neighborhood and a rich history. The museum is a way to look at the Tenderloin in a different way than we have in past years.”

Shaw noted that raising money for projects in the Tenderloin is challenging but that the museum has benefited from exceptional support. The museum has been in the planning stages for five years but has attracted the pro bono labor of builders and design firms Webcor, Perkins+Will, and Santos & Urrutia. Many other firms contributed discounted services to make the $3.4 million project possible.

Supervisor Kim expressed her excitement about a museum “that will tell the story of the Tenderloin community to a wider audience.” She added, “We are going to have a museum that features the people who spent time in the Tenderloin, like Dashiell Hammett, Muhammad Ali, and the Grateful Dead.”

Shaw also mentioned a little-known fact that the Tenderloin provided the social spaces—bars and cafes—to launch the early lesbian, gay, and transgender movement. Joyce Wright, a resident of the Union Hotel on Geary Street, said she thought it would be a “wonderful addition to the neighborhood.” She smiled, adding, “I hope they have a picture of Carlos Santana. He spent time here too.”

One of the project’s architects, James Mallery of Perkins+Will who also holds a Ph.D. in history, dug into the Tenderloin’s history himself. He discovered that, in 1917, city officials attempted to close down the Tenderloin entirely. Many would no doubt like to do that today, but Shaw believes the Tenderloin Museum will enlighten San Franciscans—and tourists—about the neighborhood’s history. Mayor Lee agreed. When visitors want a uniquely San Francisco experience, “we’ll tell them, ‘the Tenderloin Museum’ has what they’re looking for.” The mayor also noted that the museum will help to attract new businesses and investors to the neighborhood.

Brenda Washington, a resident of an SRO hotel a few blocks away also sits on the board of the Tenderloin Museum. She said, “I think [the museum is] wonderful. It’s going to be an added site to see in the Tenderloin—somewhere you can go for some positive information about it, instead of just all negative stuff. It’ll beautify the neighborhood.”

Dell Seymour runs Tenderloin Walking Tours, which shows visitors the lesser known sites of the neighborhood. He will be leading tours out of the museum, which will be free with the price of admission. “I’m very excited. I come by [the site] almost every day hoping for the start of construction. The residents are all looking forward to having a museum dedicated to their neighborhood.”

Shaw credits Leroy Looper, legendary Tenderloin community leader and founder of the Cadillac Hotel, with providing the vision for Tenderloin that was both safe and inclusive. “Leroy Looper’s dream for the Tenderloin showed us what it could be. He invited me to get involved, and I’ve been here 35 years.” Cathy Looper, Leroy’s widow and the current Cadillac owner, agreed. “Leroy was a visionary,” she said. “Some of our efforts to better the Tenderloin failed in the past because we did not have the momentum. But with a group like this,” she said gesturing to the packed room, “we can succeed. Everyone, pull out your checkbooks.”

You can view renderings of the museum at http://www.tenderloinmuseum.org/