Mayor Lee Comes to Tenderloin to Promote Investing in Neighborhoods 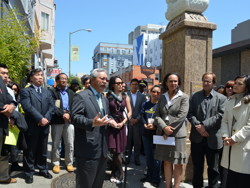 Mayor Ed Lee came to Little Saigon in the Tenderloin on May 29 to promote new city investment in small businesses. The Mayor’s upcoming budget allocates $1.5 million over two years for a wide range of small business assistance, and also adds two new “Job Squad” staff to help small businesses navigate the city’s often complex laws and rules. Joining the Mayor at the event were Supervisors Jane Kim and Carmen Chu, as well as many of the area’s local restaurant owners. The Tenderloin was a fitting site for the event, as many of its small business owners are immigrants who are not aware of city programs designed to help them grow. The Mayor vowed to use the newly allocated funds and $4 million previously allocated to small business to help job creation in the Tenderloin and citywide.

I have attended many Tenderloin events over the years, but the May 29 event with Mayor Lee likely included the broadest group of successful neighborhood restaurants yet. From Turtle Tower to Burmese Kitchen to Philz Coffee (soon to open at Golden Gate & Larkin) to Lee’s Sandwiches, it was a great advertisement for people to come down to Little Saigon for lunch and coffee.

Many other restaurant operators could not get away from serving lunch to attend. There are few streets in San Francisco as filled with quality ethnic restaurants as Little Saigon.

Not surprisingly, the Mayor’s announcement of additional money to help small business and his planned “Job Squad” was a big hit with business owners. And while Mayor Lee has built strong relationships with high-tech CEO’s and the Warriors owners, the event again showed that he is most at home when helping small businesses.

The Mayor recalled the many meals he and current DPW chief Mohammed Nuru enjoyed in Little Saigon when he was Chief Administrative Officer. Turtle Tower is among the mayor’s favorites, and the owners spoke at the event about their recent purchase of a building a few doors down from their current site that reflects their longterm investment in the neighborhood.

The event occurred one block from the recently completed Tenderloin-Little Saigon transit plan, which has converted Ellis from Jones to Larkin and Eddy from Leavenworth to Larkin to two-way streets. The complete conversion of these streets to two-way would be funded by CPMC as part of the city’s development agreement.

Two-way streets are not only better for pedestrians and bicyclists, but also help drivers notice small businesses rather than using neighborhood streets as a thruway.

Although the new small business programs affect corridors citywide, it sent a powerful message that Mayor Lee held the event in the Tenderloin. With Twitter and other tech companies soon relocating to 9th and Market, the hope is that employees will head to Little Saigon for great food after work.

A number of Tenderloin restaurant owners have told me they would love to expand evening hours, so long as they can attract the business. The Mayor’s new programs should help accomplish this by ensuring tech employees learn about quality restaurants in Little Saigon and in other Tenderloin locations. Once they sample the area’s cuisine, they are sure to become regular customers.