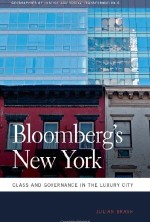 New York City Mayor Michael Bloomberg spent more money winning the 2001 election than any prior mayoral candidate in United States history, and also used his fortune to win two additional terms. As the city’s first “CEO” mayor, Bloomberg has successfully branded New York City as a “luxury city,” while also greatly expanding public access to waterfronts, improving the delivery of city services and making Manhattan far more pedestrian-friendly. Bloomberg’s approach to governance offers a complex case that requires a particularly nuanced and fact-driven analysis. Julian Brash’s new book, Bloomberg’s New York: Class and Governance in the Luxury City, addresses some components of the mayor’s leadership strategy, particularly emphasizing his effort to run the city like a private corporation. The “Bloomberg Way” advances the city’s economic “competitiveness” even at the expense of the employment needs of millions of low-income residents, which is why many cheer Bloomberg as a model for a big city mayor while others see him as a cautionary tale.

Reading Julian Brash’s analysis of Bloomberg’s New York City reminded me of debates during the late 1970’s through the mid-1980’s about deindustrialization. While conservatives and neo-liberals argued that market competitiveness meant that the United States should support corporations seeking to leave Rust Belt states for better deals in the south or overseas, progressives felt the government should intervene in the market to protect well-paying manufacturing and blue collar jobs.

Bloomberg is a true believer in the former approach, and came into office wanting New York City to attract businesses that had strong reason to come to New York City regardless of the broader social impacts. This meant expanding finance, while ignoring manufacturing and other industries offering blue-collar jobs (other than the construction jobs created by new development) needed by millions of existing city residents. Bloomberg saw New York as unable to compete with other cities for such industries, so, like a CEO in a private corporation, wrote them off.

This prioritization of “competitiveness” is central to Brash’s book, as it reflects Bloomberg’s model for big city mayors. Brash notes that even many of the city’s progressives now accept that a mayor must run a city like a profit-driven private corporation, as the effective delivery of public services is prioritized over politicians more committed to policies favoring greater social and economic justice.

Brash sees Bloomberg’s prioritization of elite interests and overall approach as best embodied in the mayor’s effort in 2004 to implement a major redevelopment of Manhattan’s Westside (centered by the former Hell’s Kitchen). He devotes multiple chapters to this complex struggle, which involves many players, details and actions that readers unfamiliar with the campaign will likely find hard to follow. The use of Hudson Yards as the chief case study is also questionable because it involved a unique political obstacle, needing and ultimately failing to gain the support of state Assemblymember Sheldon Silver.

Brash had many better examples available to prove his thesis about Bloomberg’s autocratic and often elite-driven approach to governance, including Bloomberg’s support for the outrageous Atlantic Yards land grab in Brooklyn. That project had all of the features Brash found compelling in the Hudson yards struggle, including a new stadium as a “front” for a massive new office development scheme. Silver also could have killed Atlantic Yards, but was not the central figure in a project whose construction reflects how Bloomberg has almost always gotten his way.

While Brash sees Bloomberg as promoting the narrow interests of the “transnational capitalist class” (the TCC), the mayor’s agenda is more complicated. For example, the one area where many progressives would rate the mayor the lowest is on his approach to public schools. Bloomberg’s effort to run the schools like a private corporation reflects his belief that he knows best on how to solve virtually any tough social problem; the elites he is said to represent do not send their kids to public schools and are not impacted by his destructive school agenda.

Similarly, it’s not elites who primarily benefit from the massive new waterfront parks Bloomberg has made happen in Brooklyn, or from the elimination of traffic and expansion of seating areas at Madison Park and throughout Midtown Manhattan.

As Brash points out, Bloomberg represents more of a perfection of prior corporatist and elite policies in New York City than a break from the past. Finance replaced real estate as the city’s driving force, but the impact of their dominance on the city’s demographics was largely the same. New York City was a “luxury” city before Bloomberg’s intensive branding effort, and will remain so after he leaves office.

As Brash notes, the City Council has rubber-stamped virtually all of Bloomberg’s land use plans As I wrote back in 2009 regarding Bloomberg’s Northwest Bronx Armory plan (a rare time when the Council reversed the mayor’s plans), New York City under Bloomberg is a case study for a ballot initiative process to limit mayoral power and stop bad developments.

The Bloomberg Way would not be possible in San Francisco, Los Angeles, or other cities with an initiative process, because voters could kill unpopular projects at the ballot box. Or, as often occurs, the possibility of initiatives forces mayors and developers to improve their projects to insulate them from such a process.

Ultimately, Michael Bloomberg could wield extraordinary power less because he knew how to navigate the corporate and financial worlds, but rather because New York City is a profoundly undemocratic city. It empowers a savvy autocrat like Bloomberg to make sweeping changes, and to even overturn term limits without an election.

New York City is home to so many people who write about progressive social change, and has such a tremendous activist history, that its major political shift to the right since the 1975 fiscal meltdown is not widely understood. We are talking about a city whose most liberal mayor in the past four decades is a choice among neoliberal Ed Koch, corporate-friendly moderate David Dinkins, or Democrat turned Republican Michael Bloomberg, and whose City Council has done little to boost progressive interests (a sharp contrast to San Francisco, whose Board of Supervisors accomplished this from at least 2001-2009).

And it elected and re-elected Rudy Giuliani, who was far to the right of anyone elected mayor in any other major city over the past decades.

Brash’s book is a good start for analyzing New York City in the Bloomberg years. It should be followed by additional books on the full impact of his tenure, as well as those examining how New York City can regain greater democracy for its non-elite residents.