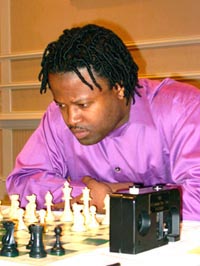 Born March 6, 1966 in St. Andrew, Jamaica, Maurice Ashley was raised by his grandmother, while his mother tried to save enough money to bring him and his siblings to New York. It was a tough childhood at times, (his brother Devon would become a world-champion kickboxer, and sister Alicia, a world-champion boxer). Maurice’s toughness didn’t develop in the ring however. Instead, he found it in the heated speed-chess matches of Brooklyn’s Prospect Park, and Manhattan’s Washington Square Park.

Ashley’s family moved to Brooklyn when he was 12 and he took up the game of chess after learning the moves from his brother. After being thrashed his initial game against a friend, he went to the library and was inspired by a book on the famous World Champion of the 1850’s, Paul Morphy. At that moment, he fell in love. Despite the fact that he couldn’t make his high school team at Brooklyn Tech, he began to play in local tournaments. Later he sharpened his game by playing a contingent of Black masters in New York’s Black Bear Chess Club. Ashley’s progress was rapid as he earned the rank of National Master in 1986, and eclipsed the 2400 barrier and later earned the rank of International Master in 1993. After taking a break from his successful coaching career, he earned his last GM norm at the Manhattan Invitation in March 1999 becoming the first, (and so far only) U.S. player of African descent to earn the coveted title, and was the first black to qualify for the U.S. Chess Championship.

“I feel like I’ve already won, just coming in the door. If I’m the first, what that means is that there’s going to be a second, and a third, and a fourth. That I’m very pleased about.”

Ashley has been a constant subject in national and international media appearing on countless programs, and in addition, has achieved worldwide fame in the chess world by serving as commentator in the Kasparov-Short/Deep Blue/Fritz matches for ESPN2. He also has one of the best instructional CD-ROM programs on the market entitled, “Maurice Ashley Teaches Chess.” The interactive format combined with Ashley’s trademark exciting sports analogies makes learning chess both easy and entertaining. Ashley, like many other players, is a staunch advocate of teaching chess in schools; “It teaches kids an intellectual discipline that serves them well in life”. Ashley, has also coached teams from Harlem to national championships before quitting to focus on his professional play.

As a player, his most recent success has been his string of strong performances at the Foxwoods tournaments. In the 2002 Foxwoods tourney, he finished second, and as a result, qualified for the 2003 U.S. Championship which will took place in Seattle. His “mixture of charisma, poise, and intellectual acuity”, really does exemplify a shining example of a chess master we can be proud of.

Here is his game against one of the Bay Area’s best Chess masters.

E. “Doc” Smith has been an expert chess player, and has won divisional titles in the U.S. Amateur Team Championships for Brown University as well as the Rhode Island Chess League Championships. He also teaches chess to kids in S.F. schools, where he has recently started a very successful citywide tournament.