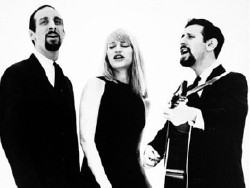 Mary Travers helped shape my life. The vocalist from the folk trio, Peter, Paul and Mary died recently of leukemia. She was 72. She was a legend in her own time.

Born in Louisville, Kentucky in 1936, the daughter of journalists, she was actually raised in Greenwich Village. So she didn’t have to leave home to follow the exodus in the late 50s and early 60s of disenfranchised young people to big cities such as New York. She grew up surrounded by folk clubs, and the music of the new generation.

I first became aware of Peter, Paul and Mary around the same time that I began listening to the other progressive folk music artists of the 60s, such as Donovan, Bob Dylan and Joan Baez.

Before that, I had been strictly a jazz fan. I never stopped loving jazz (I still do), but around 1964 or 65 I turned on in a big way to the sounds of the protest singers whose songs were suddenly all over the airwaves.

It was a different time for radio. There were no shock jocks using childish antics or racist and homophobic slurs to get ratings. The stations I listened to played the music that reflected the values of the college students I heard about who were protesting at college campuses for free speech, peace and equality for all.

One particular program, which aired on Sunday nights, featured all folk music, and it was there that I first listened to Peter, Paul and Mary. By the time I started tuning it in, they weren’t new, they had released their first LP (as in vinyl, as in pre-cassette and 8-track) in 1962 and made hits of several songs, including “Puff the Magic Dragon,” “If I Had a Hammer” and Dylan’s “Blowin in the Wind.”

They had also played the 1963 March on Washington for civil rights in which Dr. Martin Luther King gave his now famous “I have a dream” speech.

In 1971, the group broke up, and Mary Travers released five solo albums. But they re-united time and time again, playing for political causes close to their hearts. They were onstage for the 25thanniversary of the Kent State shootings. They sang for California strawberry workers. They sang songs of torture in El Salvador and gay kids being taunted for being different.

In this era of spoiled rock stars such as Britney Spears, it’s hard to imagine what Peter, Paul and Mary meant back then. They were more than songwriters or performers. They were spokespeople for a generation that was unhappy with a world they were inheriting: the endless war, the messed-up environment, the racial inequality, the hypocrisy of a nation that stood for freedom of speech yet stifled it in every way possible.

The lifelong activism of performers such as Mary Travers spoke to me, and inspired me to make activism my life work.

For that, I will always be grateful.