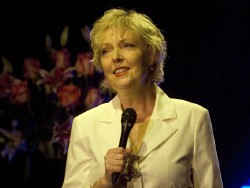 Singing songs made famous by one of the most popular entertainers of all time is not an easy task. Haran, however has managed to bring some of the charisma of Day to the Rrazz stage. She is not trying to sound like Day, but only to give us the feeling that somehow Day is in the room. One of Haran’s winners of the evening, and there are many, was “It All Depends of You.” Haran gives new value to this wonderful Ray Henderson Standard.

She also enchanted with the Richard Rodgers/Lorenz Hart “Little Girl Blue”. Having worked with Doris Day on a Documentary that was on PBS, Haran gives us some insights to the sometimes-mysterious Day. “Her first big hit was when she went with the Les Brown Band and sang “Sentimental Journey” (he wrote the music) – it was a big hit that I enjoyed immensely as I was growing up. It is still one of the most played standards today.” – sez Haran.

Haran sang Day’s huge hit “Que Sera, Sera” – it wouldn’t be a Doris Day evening without it. Haran made it fresh again. Wonderful song that is full of smiles.

Of course it would not be a Doris Day event without some Sammy Cahn wonderful lyrics – and they show up in “I’ll Never Stop Loving You.” Great tune sung by two great stars – Doris Day (originally) and Mary Cleere Haran for today’s audience.

Haran was surprisingly funny as she interjects plenty of humor in between the beautiful rendering of the intricate song styling of the songs that made a True American Idol of Doris Day.

I was happy and thrilled to be able to hear all these wonderful songs again on a stage. The Rrazz Room is the perfect place for this impressive evening with Haran.

Connie Champagne in Songs to make you Gay. Photo by Daniel Nicoletta.

Many songs can be interpreted in different ways. For instance “Bluest eyes in Texas” could mean that you are looking into a Domestic partners eyes. This Rodgers and Hammerstein song could be sung to a Gay partner – “If I Loved You.” And if you are not Gay now, if you sing this song — “There are Fairies at the bottom of our Garden” – you will be, after Connie Champagne sings it.

Then there is Noel Coward (Mad about the Boy). Did he write that for a straight woman or was it meant that he was Mad about the boy? I think you know the answer to that.

Gay men have sang this song many times – and it may have turned many of them that were not Gay into being Gay. Its “Boulevard of Broken Dreams” – we have all suffered through that, haven’t we?

“Bad Girls” sung by Champagne is a big, sweeping Lesbian Docu-drama. But the ultimate song that should be the Gay National Anthem is “I Will Survive”. You know you can do it (survive that is) and become “Lady Stardust” (David Bowie).

So, the theme of this show is, hold onto your heterosexuality. It’s elusive and you must never sing these songs in public. Or, you will be suspect. Connie Champagne (everyone that hears the name thinks that she is a Drag Queen) – but she’s not. While leaving a show, a man that I did not know walked along side of me and asked, what did you think of the show? “Spectacular”, I said. He said: “I liked it too – but I have to be honest with you. When I saw the name “Connie Champagne”, I thought it was a drag show.” And, I said: “Well, it is!”

Yes, Connie does sometimes look like a drag queen. However she is an exceptionally well-dressed one. And she has real boobs, so I am assuming that she is a real woman. The one thing that I am certain about is that when you go to see this show, “you’ll laugh from beginning to end.”

There is one song that completely captivated me. It is called Johnny Mathis’ Feet (Mark Eitzel). The lyrics and melody is very touching and moving.

Most of the time Champagne looks soooooo glamorous, but there were a few moments when she looked like American Idol’s Adam Lambert. Or, is that he looks like her? I don’t know. Things are so changeable these days.

Champagne magically and mysteriously disappears behind the piano to emerge soon with a completely new look. How does she do it? I’m sure she is a Witch of some kind. And, I’m sure it’s not necessarily Glinda the good witch.

Hurrahs to Joe Wicht, the musical Director. Wicht adds greatly to this evening of fun and frolic. Not only does he have a great voice also — but his arrangements are just terrific. Loved every minute of the duets that he did with Champagne! He’s a great talent!

At the New Conservatory Theatre Center

Seraphine is a passionate chronicle about extraordinary French Artist Seraphine Louis. After her parents died she became a domestic worker for the sisters in the Convent Providence at Clermont (Oise). She left that, to work as a housekeeper for middle class families in Senlis.

She was poor as dirt but had a relentless urge to paint. So in the evening when she finished her poorly paying jobs she would paint till long hours of the night. No money to buy paint or supplies, Seraphine made paints from flowers, oils and anything else that she could squeeze some color out of.

Her body of work was discovered by one of her employers by chance. He was a famous Art Collector (Wilhelm Uhde). He supported her – gave her money to buy supplies and it looked like Seraphine was headed for the top. But then the war between France and Germany started and Uhde had to flee the area.

Seraphine was unstable and eccentric. This let down happened just when she thought that she would be a famous artist and it depressed her. She became more erratic in her ways. Later Uhde came back to France and found that Seraphine was still alive and still painting. He tried to help her, and gave her money. But, she squandered the money and it soon ran out. The money for Uhde also began to run out. The economy because of the war, was not good – and he could no longer support her and her wasteful ways.

Seraphine’s paintings are coveted now. However, her life ended up sadly. She spent many years in a mental institution because of her bizarre actions. The sisters had her committed there.

There is a raw intensity of the film. There is no “Happily Ever After” in this exquisite film, but it is mind blowingly beautiful. Her paintings are strange, but seductive and evocative. The flowers look like they are moving on the canvas. Almost creepy, but captivating. These are some of the emotions you will feel: Perplexed, appalled, and sympathetic.

The actress, Yolande Moreau stars as Seraphine in the film. In 2009, she won a Cesar (The French Oscar) for Best Actress. The film won a total of seven Cesars, including Best Film.

Now playing at a Landmark Theater near you.