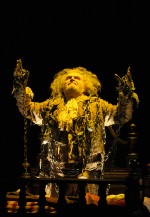 A Christmas carol never seems to run out of steam. The story about Greed and ghosts from Christmas past still intrigues audiences year after year. The current version keeps the show fresh by making slight changes the script. There are even hints of the Occupy group. One young man is holding a sign outside of Scrooge’s business that says: “I want a job!”

This year’s show is really a fresh treat. It’s like someone dropped candy canes from the top of the stage. A soufflé that never deflates — an absolute can’t miss show. This year’s version has bumped up the Children’s presence as Vegetables to a level of delight that really shows off their talents. You could say that they are “Fresh and bright Veggies.”

James Carpenter (Scrooge) is again the master of mean. It’s so much fun to see him go from really nasty to warm and fuzzy. And of course there is the ultimate ditzy, Sharon Lockwood as Mrs. Dilber. Her part may be small – but her impact is positively historic. With Carpenter and Lockwood together, you get an impressive acting duo.

Also igniting the stage are Manoel Feliciano (Bob Cratchit), Graham Bennett (Tiny Tim), and Sarah Magen (Belinda Cratchit). Also – there are the Ghosts: Jack Willis, Ben Kahre and Omoze Idehenre (Xmas Past). There is more than I can squeeze in – but with the children and all the adults I counted at least forty or more people in and out of the stage.

Directed by Domenique Lozano and based on the original Direction by Carey Perloff. What would this play do without them? They have that marvelous touch. I keep hoping that maybe next time they will turn the play into a complete Broadway style musical. Will – I can hope can’t I?

Also love the music direction by Robert Rutt. Beaver Bauer’s Costumes still infuse excitement to the evening – and the sound by Jake Rodriquez will almost bounce you out of the seat. It’s great! — As is Nancy Schertler lighting design.

WE HAVE BEEN INVADED BY THE BRITISH

Kneehigh’s Theater Company has brought with them from Cornwall – the Costumes, scenery, props and the best Actors in the world. All of this is now on the Roda Stage in Berkeley to turn the stage into a miraculous stunning evening. And I’m not surprised – “Kneehigh” has always been top-quality – and always will be.

This show is a dynamic team. Everything has to work like clockwork. One little fumble or mistake can ruin the whole canvas. The energetic Actor, musicians and set design bring forth a thrilling atmosphere that you won’t easily forget. This team is beyond magnificent. For me – it was like watching Acting Gods. They could do nothing wrong. Heck, I would have like to hang around with them after the show. Maybe even travel with them to the next Theater. Of course, I kid – but I absolutely will see it again, and again and maybe again!

THE SPELLBINDING ACTORS ARE: Audrey Brisson (The Girl) – Stuart Goodwin (the Father & The Prince) – Patrycja Kujawska (The Wild) – Eva Magyar (The Woman) Stuart McLoughlin (The Devil)- Ian Ross (The Musician). Hip Hip Hooray! – “They all give performances of unrelenting ferocity. And I will say even more: The cast and the show is an extraordinary achievement in the Theatre World. It’s a gripping thriller and wicked delight. If you love ‘Live Wire’ acting – you’ll love this show! Here’s a fun note: Someone sitting behind me said – “Goodwin Cheated … he’s wearing a Kilt with shorts underneath. That’s Cheating! I’m disappointed!” Gee – he sure is observant – I didn’t look that closely.

AT THE BERKELEY REP RODA THEATRE

THE GOLDEN GIRLS (A SPOOF)

CALL ME CRAZY – But I became a die-hard Fan of the Golden Girls. The Girls were not only funny, but they also delved into social and controversial issues. Yes, they probed the forbidden. Aging, poverty, discrimination, dying, friendship and even homosexuality were all problems around the world. But two men set out to make a difference How did they get away with it on what most thought of as a ‘family show’. Easy for them, with their wit and charm and tongue in cheek barbs.

Marc Cherry was in the production crew. You know him now as the creator of “Desperate Housewives.” You can still see the show on some reruns or old VCR’s – but I have a better idea. Go to the Victoria Theatre on 16th@Mission to see a live take (with permission) of the Drag Version of the “Golden Girls.” They have been doing this show for something like 13-years. This is the first time in a really big Theatre.

The show is actually called “The Golden Girls: The Christmas Episodes 2011. And believe me – this Xmas will be the most fun you’ll have this year. In the cast are these amazing actors, that look and act surprisingly like the T.V. Actors. They are: Laurie Bushman, Manuel Caneri, Pollo Del Mar, Cookie Dough, Heklina and Matthew Martin…with Special guest D’Arcy Drollinger. You’ll just love these Episodes: During her Christmas visit. Dorothy’s Lesbian friend Jean falls for the naïve and dorky Rose. Then there is this – Blanche’s gay brother Clayton stays over with the girls during the Christmas holiday and ‘Surprises’ Blanch with the news that he plans to marry his boyfriend, Diego. You’ll just love this Laugh-out-loud comedy.

These over the top personalities really make this the show that everyone if talking about. It’s uproariously funny.

IT’S WONDERFUL, IT KEEPS YOU BEAMING WITH PLEASURE! – GO SEE IT! At the Victoria Theatre