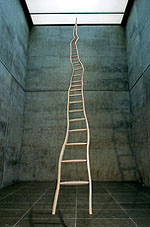 The Puryear family of Washington, DC has certainly produced a talented array of brothers. Mark, an ethnomusicologist and Maynard, a fine craftsman of jewelry, are also great guitarists and two of my oldest, musical friends. But perhaps best known is their older brother, Martin Puryear, counted among the world’s best modern artists and sculptors. From his early solo work at my alma mater, the Corcoran Gallery of Art, to his current show now at SFMOMA, Pureyear has blazed a path in the post-minimalist art world that is quite simply astounding. His sculptures are rich with psychological and intellectual references, examining issues of identity, culture, and history. The exhibition will be accompanied by a publication illustrating all works in the exhibition, with additional reference illustrations of the artist’s works and other comparative material. If you weren’t able to attend the opening last Saturday night, fear not. Take an opportunity to see the works of one of the greatest artists of this or any other era, at SFMOMA, through January 25th.

Puryear was born in Washington, D.C., in 1941 and in his youth, he studied crafts and learned how to build guitars, furniture, and canoes through practical training and instruction. After earning his BA from Catholic University in Washington D.C., Puryear joined the Peace Corps, teaching in a remote village in Sierra Leone, and later attended the Swedish Royal Academy of Art. He received an MFA in sculpture from Yale University in 1971. Puryear’s objects and public installations—in wood, stone, tar, wire, and various metals—are a marriage of Minimalist logic with traditional ways of making.

Puryear’s evocative, dreamlike explorations in abstract forms retain vestigial elements of utility from everyday objects found in the world. In “Ladder for Booker T. Washington,” Puryear built a spindly, meandering ladder out of jointed ash wood. More than thirty-five feet tall, the ladder narrows toward the top, creating a distorted sense of perspective that evokes an unattainable or illusionary goal.

Puryear’s experiences in Africa and Scandinavia led him to concentrate for much of his career on the sculpting of wood, a medium not commonly employed in modern sculpture. His elegant and powerful work shows a consummate understanding of a wide range of woodworking techniques, including processes such as the lamination and painting of forms “Self”, 1978 and strategies evolved from basketry “Charm of Subsistence”, 1989.

His forms, reduced to essences, are derived from nature or culture and still suggest the actual objects to which they refer. Puryear’s efforts as a public sculptor have led him to such materials as steel and granite “Untitled”, 1994. In the massive stone piece, “Untitled,” Puryear enlisted a local stonemason to help him construct a building-like structure on a ranch in Northern California. On one side of the work is an eighteen-foot-high wall—on the other side, an inexplicable stone bulge.

A favorite form that occurs in Puryear’s work, the thick-looking stone bulge is surprisingly hollow, coloring the otherwise sturdy shape with qualities of uncertainty, emptiness, and loss. Puryear represented the United States at the São Paolo Bienal in 1989, where his exhibition won the Grand Prize. Puryear is the recipient of numerous awards, including a John D. and Catherine T. MacArthur Foundation Award, a Louis Comfort Tiffany Grant, and the Skowhegan Medal for Sculpture. Puryear was elected to the American Academy and Institute of Arts and Letters in 1992 and received an honorary doctorate from Yale University in 1994.

The SF Museum of Modern Art presents a major exhibition of the sculpture for Puryear. The retrospective will feature approximately forty-five sculptures, following the development of Puryear’s artistic career over the last thirty years, from his first solo museum show in 1977 to the present day. Puryear began his career in the 1970s alongside other members of the Post-Minimalist generation. Working primarily in wood, he has maintained an unwavering commitment to manual skill and traditional building methods.