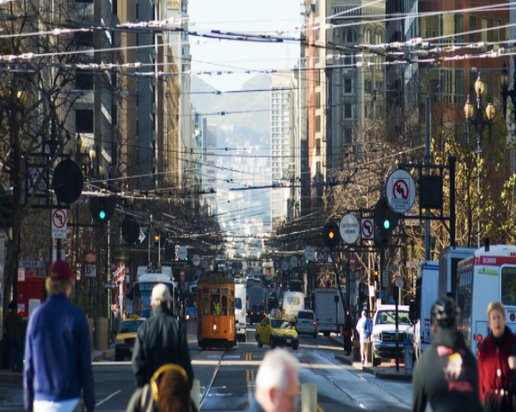 After fifty years of stagnation and decline, San Francisco’s Mid-Market Street is returning to life. A combination of new housing, restaurants and renovated offices and theaters is finally moving the city’s onetime “Great White Way” toward reclaiming its past glory.

What makes 2015 different for Mid-Market? Projects that got headlines when announced and then took years for construction are finally opening.

On October 3, 2013 I described American Conservatory Theater’s Strand Theater project as the “cornerstone for reviving the long dormant stretch of Market between 7th and 8th Streets.” On June 4, 2015 this cornerstone will open.

It represents the single most important addition to a block of Market starved for positive evening activities.

ACT deserves the city’s thanks for boldly moving to open a theater across the street from troubled UN Plaza. Let’s hope everyone who cares about Mid-Market attends at least one Strand production in 2015 as a show of support.

For all its name recognition and historic success, ACT still faces a short-term challenge of getting people to attend evening events at that location. Attendance at the UN Plaza Friday Night Market shows that people will come to that area after dark, and is a good sign for ACT.

Whether the renown theater company can attract a likely older crowd than who comes to the plaza on Friday nights will be a good barometer of Mid-Market’s progress. If you want to know more why ACT chose this challenge, the backstory of ACT’s decision to open the Strand is included in ACT Artistic Director Carey Perloff’s dynamic new book, Beautiful Chaos: A Life in the Theater.

I wrote about The Hall’s October 2014 opening, when expectations were high. Its 1028 Market Street site had languished since the closure of Hollywood Billiards, and there was a feeling that anything was better than nothing.

But last October there was also uncertainty as to whether an innovative food emporium at that location could make it. The failures of nearby Market Street restaurants like Pearls, that also opened to great fanfare, raised understandable concern.

This concern is gone. The Hall is a hit. I had heard a lot of great reports (including from my kids) and when I went there last week for lunch nearly all the tables were filled. The food all looked great and the biggest problem customers face is choosing among so many tantalizing options.

The Hall benefited from the rain-free January, as its outdoor tables make it a unique setting to dine. But the popularity of its food will sustain it regardless of weather conditions.

What’s striking about The Hall’s success is that to my knowledge, neither Scott Plank nor Craig Young, Tidewater Capital’s two principals, had any prior experience running restaurants. Yet they chose the right mix of food purveryors to make The Hall work.

The Hall is a temporary pop up pending city approval of a housing development on the site, Plank and Young now have an unlikely problem: finding a new Market Street location to ensure The Hall’s survival.

The Emerald Fund’s 400 unit housing development at 100 Van Ness is now filling up, adding permanent residents to a Mid-Market district where they are needed. It’s hard to succeed as a Market Street restaurant or “neighborhood serving business” without many neighborhood residents.

When you add Emerald Fund’s three-building total of 1000 units to the several hundred apartments still left to be built at Trinity Plaza, Mid-Market’s new permanent residents will boost local merchants as well as neighborhood safety.

None of the four tourist hotels planned for Market between 5th and 8th streets will open in 2015. This makes the new residential buildings even more important.

I am often asked whether these new Mid-Market residents will help the adjacent Tenderloin. Absolutely, so long as the Tenderloin offers establishments like Farmer Brown’s, Mikkeller’s and Bourbon & Branch that attract them.

To help attract nearby residents, new businesses on Larkin Street in Little Saigon (The Strand, Barber and Beauty, The Loin, San Francycle, Vacation, Soul Groove and Fleetwood) are collaborating in an effort to get people to come by in the evening, Described by Urban Solutions as, “Open Late on Larkin,” there will be art, shopping, and good food on Thursday, February 5 from 6:00pm until it ends.

As with the UN Plaza Night Market, organizers hope to make this a regular monthly event and to extend it to more businesses in the future.

Many ongoing new venues are also opening in the Tenderloin. PianoFight opened at the former Original Joe’s at 142 Taylor on December 19 and is one such destination. The improv company has constantly changing plays for only $15 admission. It also has a full bar and restaurant, with a free jazz concert before theater performances.

The Tenderloin Museum, opening in May, is another potential evening venue for nearby residents. The Museum will include cultural, arts and community activities in evenings that will give people something to do besides eat and drink after work. Both the new Museum website (under construction) and a completely redesigned one for Central Market (formerly known as Epicenter) will keep local residents informed about activities and events in the area.

Counterpulse dance studio will open on lower Turk in 2015, and should also attract nearby residents. Counterpulse particularly deserves public support as it chose to move to the first block of Turk when it was still among the city’s most crime infested blocks. Thanks to resident activism the block has been transformed and new restaurants and bars are opening around Counterpulse’s new theater. A location that some might have seen as hampering the dance company’s ability to attract people is becoming a major positive.

There are other new venues planned for the Tenderloin, including a Kabuki-type spa and tea house on Eddy Street down from the Museum. All will benefit from thousands of new residents within walking distance. The Tenderloin has suffered from a massive out-migration of resident dollars, as residents are forced to leave to get basic services and amenities. That is finally in the process of changing.

While Mid-Market saw progress in recent years, 2015 should be the turning point. So many new establishments are opening that crowds of people will be walking down sidewalks to their destination for the first time since the early 1960’s.

Challenges remain. A philanthropist is still needed to invest in physical improvements to UN Plaza, and the hoped for Market Street bicycle thoroughfare is still a few years away.

But in 2015, San Francisco’s onetime “Great White Way” of Market Street is returning to life.