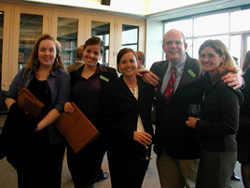 Jordanna Thigpen, an attorney and jewelry import store owner active with the Marina Merchants Association, may become the first prominent challenger to District Six Supervisor Chris Daly. Thigpen is currently soliciting support for the race, and has attacked Daly’s environmental record and charged him with causing divisiveness. But the Small Business Commissioner is a complete unknown in District 6, and her public statements show her more attuned to the needs of upscale District Two than to the low-income residents comprising Daly’s district. If Thigpen is the best the business community can come up with, Daly is likely to be home-free in November.

After winning over 50% of the vote in a 14-candidate field in 2002, Chris Daly has yet to draw a strong challenger for this November. Now Marina District activist Jordanna Thigpen is exploring an entry into the race, even though there is also a Supervisor’s contest in District Two and she has no experience working in Daly’s district.

Thigpen has issued a broadside against Daly that attacks the incumbent for allegedly ignoring the environment. Arguing that “being progressive means putting the environment first,” Thigpen claims that “in District 6 I haven’t really heard much talk of the environment at all, with the notable exception of offering a dueling piece of legislation regarding control over private ownership of trees.”

Thigpen also accuses Daly of ignoring the need for open space in District 6. She argues, “where’s the call to promote open space in SOMA and create parks first, before development, so we can build around them and residents have somewhere to go for fresh air.”

Thigpen also charges Daly with failing to ask “all recipients of CCSF contracts and grant money to become green businesses before they receive a dime.” This cause ought to go over wonderfully in the district that is the chief headquarters for city-funded nonprofits.

Thigpen graduated from UC Davis in 1999, and may not be aware that Daly’s chief competitor in his 2000 race was Beryl Magilavy, who was involved in created the city’s Department of Environment. Environmental issues were not central to District 6 voter concerns in 2000, and they are unlikely to be in 2006.

Moreover, one reason Thigpen has not heard much about Daly’s environmental work in District 6 is that she has been busy running a Marina District business while also attending law school at USF. Given how little time she has spent in District Six, it’s no wonder that she does not know what’s going on.

One issue that Thigpen should know about, given its major media coverage, was Daly’s bold move to use his Acting Mayor status to appoint former Sierra Club President Adam Werbach to the Public Utilities Commission in 2003. This act alone should insulate Daly from attacks on his environmental record, which, contrary to Thigpen’s claims, also includes creating a park and open space.
If Thigpen spent more time in District Six, she might also learn that Daly’s tiffs with other politicians boost rather than reduce his popularity. District Six includes the city’s most low-income residents (the Tenderloin is much poorer than Bayview) and these residents love a politician who is not afraid to swear and yell at people on their behalf.

Conduct by Daly that offends Thigpen’s sensibilities, and those of her fellow District 2 leader Supervisor Alioto-Pier, is viewed positively by many in District Six. These folks love seeing their supervisor shout down landlords, and care less about whether a supervisor works well with their colleagues.

Thigpen claims she is “mad as hell” and doesn’t “want to take it anymore,” but her anger is directed at what she sees is confusion between the labels “progressive” and “moderate” in San Francisco. In contrast, District Six includes thousands of people who are mad as hell for such reasons as low wages, expensive housing, and the lack of health care; the distinction between political labels is not on their top-100 list of concerns.

Based on her lack of connection to the district, Thigpen is likely to find little support for her candidacy. If small business interests are recruiting candidates to run against Daly, they can surely do better than a person whose main civic involvement has been with the Marina Merchants Association.