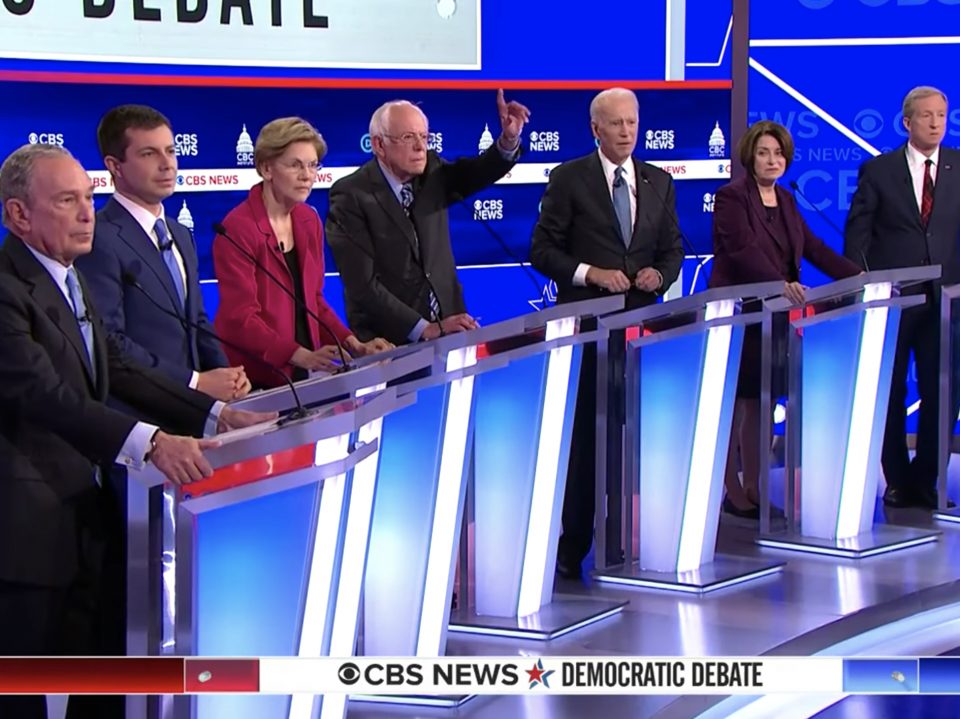 Tomorrow is a huge day for American politics. In addition to this story on Super Tuesday, see two other articles below: “Will March 3 Voters Back Housing“? and “San Francisco’s DCCC Race Takes Center Stage“.

Here is my national forecast.

A Big Night for Sanders

Super Tuesday will put Bernie Sanders in a commanding position to win the nomination.

I realize this goes against the new conventional wisdom. Joe Biden’s sweeping victory in South Carolina has supposedly made this a solid two person race. But Biden has no ground campaign in California, which has the biggest delegate count. Even those believing in Biden’s chances point only to Virginia and North Carolina as potential winning states.

In contrast, Sanders is a lock to win California. Last Friday’s LA Times poll had him beating Warren 34%-17%. That’s a huge margin in such a large field.  The Latino voting dynamic that propelled Sanders  in Nevada is even more powerful in California. California is clearly Bernie country.

Sanders also has big Latino voting support in Texas. Austin Councilmember Gregorio Casar, who I wrote about in Generation Priced Out, introduced Sanders at a 13,000 person rally in Austin on February 23. Casar’s support goes a long way in Austin and reflects Sanders’ dominance among progressives, Latinos and younger voters.

On Super Tuesday Sanders could win California, Colorado, Maine, Texas, Vermont and Virginia and even more. He has the best get out the vote organization and that will bring wins on March 3.

Media claims that Biden could win the nomination s will also shift votes from other candidates to the more progressive Sanders. This could particularly hurt Elizabeth Warren, whose campaign did not need any more disincentives for voter support.

When this race began Biden was seen as the candidate most likely to beat Trump. That is no longer the case. The candidate who does consistently best in polls against Trump is Bernie Sanders—expect Sanders’s field campaign to be making this point on phone calls and at doors on Election Day.

I voted for Elizabeth Warren. I think she would be the best president and the most effective in addressing the housing crisis, my priority issue. I also think electing the first woman president matters.

In all my years following politics I have never seen such a disconnect between people I know or whose opinions I trust supporting a candidate and that candidate’s lack of voter support. As much as I and many people I know think Warren is doing great in debates, speeches and in public appearances, she has under performed in every race to date (her third place Iowa finish fell beneath my expectations). I’d love to see Warren come out of Super Tuesday as the consensus challenger to Sanders but don’t see that  happening.

Warren had a huge turnout in Denver on February 23 and Colorado seems strong for her. But the Latino vote will help Sanders there as well. Minneapolis City Councilmember Lisa Bender, whose great housing work I also wrote about in my book, has tweeted so enthusiastically for Warren that I began thinking she could win Minnesota. But won’t Amy Klobuchar  win her home state?

Warren’s only hope is finishing so strongly across the board on March 3 that all of the other candidates give up and endorse her. But Biden and Bloomberg are unlikely to leave the race and defer to Warren.

On the other hand, if Alexandria Ocasio-Cortez ever runs for President she will get the support of the young people (and women) who backed Sanders over Warren. Warren’s failure to convince voters of her electability involves more than gender. AOC may be best positioned to the nation’s first woman president.

The Democrats are not going to nominate Joe Biden over Bernie Sanders. That only makes sense to the Never Trump Republicans and Democratic “moderates”  out of touch with Democratic voters. Biden’s South Carolina success undermines Bloomberg’s reason for running and will cost the billionaire votes on March 3. But Democrats were never going to nominate Bloomberg.

I forecast March 3 as solidifying Sanders’ hold on the nomination. As for those convinced he can’t beat Trump and say we should ignore all the polls saying otherwise because Sanders hasn’t been vetted? Come on. He’s probably been subjected to more attacks than Warren has and it hasn’t slowed him down.

I felt from the start of this nominating process that either Warren or Sanders had to be the nominee. And that both would beat Donald Trump. I’m even more convinced of that outcome today.