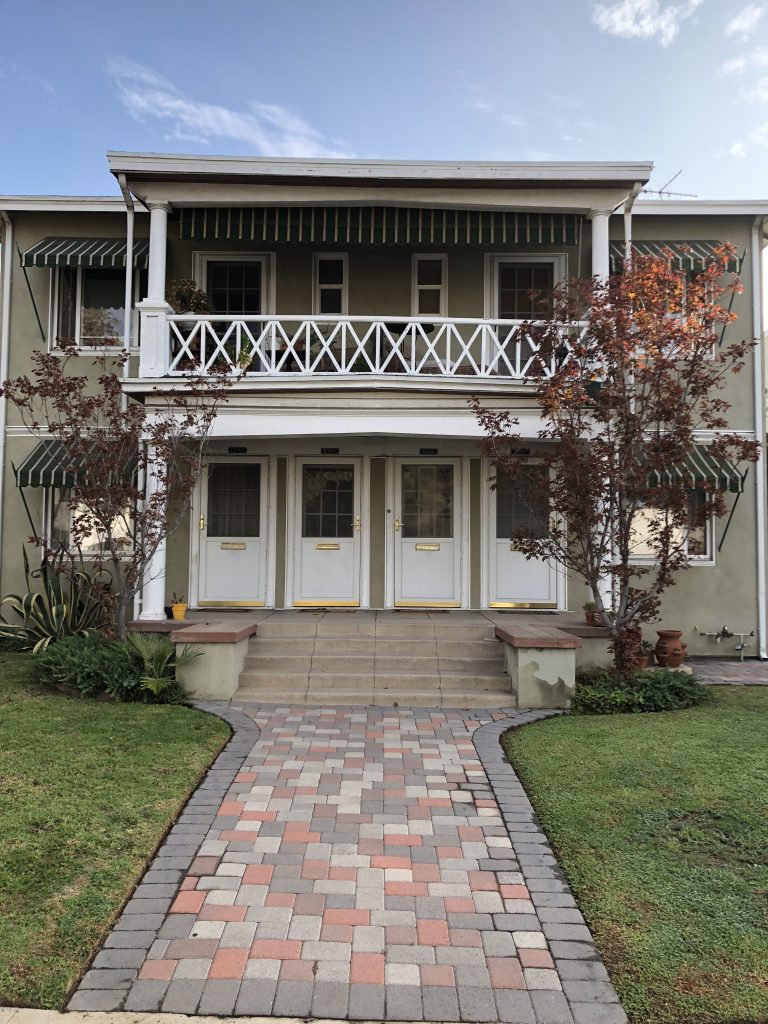 One of many fourplexes in LA' s Los Feliz neighborhood

Los Feliz’s fourplexes also boost the neighborhood’s “character.” They offer a more affordable alternative to single family homeownership, one that promotes economic and racial diversity. All of the many people I talked to in the neighborhood felt its ethnic and class diversity made Los Feliz a great place to live.

Unfortunately, most of our nation’s progressive cities now refuse to mix new flats and apartments with single-family homes. San Francisco, Seattle, Austin, Minneapolis join Los Angeles and other cities in banning new apartments in many if not most of their residential-zoned areas.

All of these cities publicly claim to support greater inclusion and racial diversity. Yet their land use policies allow mansions for the wealthy to be built in desirable neighborhoods while designating new fourplexes for the middle-class as forbidden.

Los Feliz was primarily built in the 1920’s and 1930’s. There were no homeowner groups in those days to promote neighborhood bans on new apartments, so a diverse housing landscape flourished.

You know that row of Victorian homes on Alamo Square in the photo most often used to portray San Francisco? There’s a large apartment building just to the right of that row. The presence of tenants has certainly not diminished the area’s historic character. I find that today’s most vibrant urban neighborhoods are those that combine diverse housing types.

As I describe in my new book Generation Priced Out, neighborhood groups formed to stop the bulldozing of neighborhoods for “urban renewal” soon began targeting apartments. In 1973, proponents of Berkeley’s first in the nation Neighborhood Preservation Ordinance sought to stop new “ticky tack” apartments from being built in their primarily single-family home neighborhoods.

While the phrase “ticky tack” implied concern over cheap or faulty construction design, these concerns could have been addressed through mandated design review. But instead, homeowners either banned all new apartment buildings or subjected them to a process that achieved the same result.

That’s how our progressive cities came to favor new mansions over new duplexes or fourplexes. This elitist and exclusionary zoning policy has persisted for three reasons.

Second, the presence of  apartments and what many call “missing middle” housing in neighborhoods where building similar structures is now banned leaves many residents unaware that the current zoning  exclusively allows new mansions.   Portland for Everyone and other groups refer to “re-legalizing” apartments in neighborhoods, as they previously were allowed.

Third, until the rise of the YIMBY movement we have not seen a counterbalance at public meetings to homeowner groups opposing apartments.

But this is changing.

Los Angeles Mayor Eric Garcetti noted last week, “We are seeing all these millennials and others who are not working for a developer, who are not ginned up by City Hall, turning out to public meetings now saying, ‘Densify the city. I want to have something I can afford.’”

Last week we saw strong turnouts in Minneapolis for the MPLS 2040 plan to build apartments in single-family zoned neighborhood. Amity Foster’s testimony was among many powerful statements from the area’s tenants about why renters care as much if not more about a neighborhood as homeowners (thanks again to @WedgeLIVE for the video, which I highly recommend).

I could go on and on about large pro-housing turnouts in Portland or the big election wins for pro-housing forces in Austin but I had enough to say about this pro-housing momentum that I just released a book about this new trend. A movement for legalizing apartments is sweeping urban America, and elected officials in progressive cities face a challenge explaining why they should be deemed “progressive” while supporting mansions over fourplexes.

Some opponents of new apartments will argue: that the fourplexes of the 1920’s and 1930’s do not reflect the “ticky tack” designs of what would be built today. I thought of this argument when I saw the “ticky tack” mansions that replaced small old homes with character in one of Austin’s single-family home neighborhoods.

Mansions are allowed in single family zoned districts regardless of the cheap looking design and lack of architectural quality. And there are many single-family home neighborhoods whose older homes lack quality design, and where new four story apartments would upgrade the architectural character of the neighborhood.

Cities can legalize apartments in single family zoned districts as soon as 2019. It is a question of political will.

Randy Shaw is Editor of Beyond Chron. He addresses how progressive cities can stop the pricing out the working and middle-class in Generation Priced Out: Who Gets to Live in the New Urban America