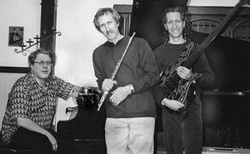 Bassist Michael Manring is well known for his work with groups like Montreux, Henry Kaiser and Wadada Leo Smith’s Yo’ Miles!; his duets with the much beloved and sorely missed Michael Hedges, songwriter John Gorka and a host of the Windaham Hill label’s best known recording artists like George Winston. His most recent CD, “Soliloquy”, is yet another musical milestone. However in 2001, Manring began his collaborations with fellow virtuosos, flautist Larry Kassin and pianist Tom Darter, resulting in their seminal work “Scatter”. This Saturday night at Mill Valley’s 142 Throckmorton Theatre, the trio reunites for what promises to be another wonderful evening of “chamber music for the new millennium”.

Separately, Manring, Kassin, and Darter have extensive, multi-faceted careers as musicians. Together, they perform provocative, complex compositions – music that tears down stylistic walls and refuses to be compartmentalized. While listeners can hear echoes of classical, jazz, rock, folk, avant-garde, and world music in their performances, the net result is something completely new: chamber music for the new century.

This virtuoso trio has been astounding audiences for the last ten years with their amazing chops, quiet soul and diverse compositions.  With over 100 albums to his credit, bass phenom Michael Manring has been hailed as “the world’s greatest electric bassist” while pianist Tom Darter’s compositions have drawn praise from Elliott Carter, Aaron Copland and Karel Husa and music critics have compared Kassin’s flute playing with Rahassan Roland Kirk, Hubert Laws and Paul Horn.

Opening the evening is Edo Castro with E. “Doctor” Smith.  Edo Castro is a multi-stringed bass virtuoso. Castro has performed with a plethora of jazz greats; Roy Haynes, Ed Thigpen, Johhny Griffin, Armando Peraza, Stu Hamm and Mark Egan, just to name but a few.  E. “Doc” Smith, a regular contributor to Beyond Chron, is a drummer and percussionist who has worked with the likes of Brian Eno, Madonna, Warren Zevon, Mickey Hart, Jimmy Cliff, and John Mayall among others. He is the inventor of the musical instrument, the Drummstick. A new recording featuring this remarkable duo is due out in early June.

Michael Manring is also known for his innovative approach to the bass and adventurous solo concerts, spawning the popular “Bass Solo Nights” concert series around the bay area. He has appeared on approximately 200 recordings, and toured throughout the Americas, Europe, and Asia. He has received Grammy and Bammie nominations, the Berklee School of Music Distinguished Alumni Award, two Gold Records, and the Bassist of the Year award from the readers of Bass Player magazine.

Tom Darter is the founding editor of Keyboard magazine, established the Contemporary Music Ensemble at the Chicago Musical College of Roosevelt University, where he also taught music theory and composition. He has arranged two albums of music for the Kronos Quartet Monk Suite (Music of Bill Evans), played keyboards on numerous Jerry Goldsmith film scores, and has won several composition awards.

“Scatter” is a truly beautiful collection of well thought out and marvelously performed pieces. Recorded live in San Francisco, it begins with the playful “Gizmo” and shows the trio at it’s rollicking best; “Ultra-body Over the Mountain” is another deceptively complex, yet tight arrangement. “Scatter”, the CD’s title cut lives up to it’s name; a hectic ride you may wish to fasten your seat belt for; “The Chicago Picasso” is one of the loveliest songs on album, with Darter and Kassin’s interplay a sparkling gem. I could hear Darter channeling Eubie himself on the jaunty “Eubie Blake on Mars”, and honestly, can anyone actually play as fast as those three on “Sabar”?

Greg Rule of Keyboard magazine once said of the trio, “Mindboggling musicianship.  Complex, provocative compositions.  Darter, Manring and Kassin are all-around awesome!” Upon seeing them, I think you’ll agree.

Lisa Star, is the head of Passion Star Music, and has formed her own record label and publishing companies. In addition, she is an emerging singer/songwriter.