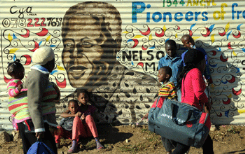 As the world mourns the passing of Nelson Mandela – who was oftentimes affectionately referred to by his Xhosa clan name “Madiba,” or as “Tata” (Father)- I, too, like so many LGBTQ activists across the globe, give thanks for his unwavering support on behalf of our civil rights.

During his tenure as president Mandela modeled for the world what an LGBTQ-inclusive democracy entailed.

For example, under Mandela, South Africa’s post-apartheid constitution was the first in the world to ban anti-LGBTQ discrimination on the basis of sexual orientation and gender identity. The country was the fifth in the world, and the first on the Motherland to legalize marriage equality. While in office Mandela appointed an HIV-positive gay man, Edwin Cameron, to the nation’s highest court. And long before his son, Makgatho Mandela, 54, died of AIDS, Mandela was the country’s most vocal and visible HIV/AIDS prevention advocate campaigning against both its stigma and silence.

But, sadly, Nelson Mandela’s LGBTQ advocacy and his impact on the Motherland as well as African diasporic countries and communities across the globe have shown little or no light.
Much of the opposition to LGBTQ civil rights deriving from these countries and communities around the globe – Africa, Caribbean, European and the Americas – when not fueled and funded by Western right-wing homophobic Christian groups – was that no credible heterosexual Alpha male role model could possibly exist and also be African of a royal patriarchal warrior/chief lineage.

But as a former boxer and son of the chief of the Xhosa-speaking Tembu tribe in South Africa, Mandela was the quintessential paragon of African royalty, black power and black masculinity. However, Mandela’s forward thinking and actions neither tamped down nor stemmed anti-gay rhetoric, murderous acts or homophobic witch-hunting.

For example, to hear of human rights abuses in Uganda’s is sadly, not new. The country’s Anti-Homosexuality Bill dubbed “Kill the Gays bill” criminalizes same-sex relations. And depending on which category your homosexual behavior is classified as – ”aggravated homosexual” or “the offense of homosexuality” – you’ll either received the death penalty or if you’re lucky life imprisonment.

David Kato, father of the Uganda’s LGBTQ rights movement, however, didn’t live to receive either punishment. On a list of 100 LGBTQ Ugandans whose names and photos were published in an October 2010 tabloid newspaper calling for their execution, Kato was murdered in January of 2011.

Throughout the African continent there are numerous stories of homophobic bullying, bashing and abuses of its LGBTQ population. None of us will forget Zimbabwe’s despot Robert Mugabe, who treated his LGBTQ citizens with torturous action, has yet to be brought to justice. Mugabe’s condemnation of his LGBTQ population is that they are the cause of Zimbabwe’s problems and he views homosexuality as “un-African” and an immoral culture brought by colonists and practiced by only ‘a few whites’ in his country.”

But if truth be told, Mandela’s advocacy has shown very little light even in his country, the one country you don’t expect to hear anti-LGBTQ rhetoric and human rights abuses. But South Africa has a serious problem with its LGBTQ population, and especially with lesbians. And its method to remedy its problem with lesbians is “corrective rape.”

Corrective rape is a hate crime that for the most part goes unreported and unprosecuted in South Africa. And, these rapes are the major contributor to HIV/AIDs epidemic among South African lesbians.

In the Caribbean, Jamaica is not the most homophobic island country; it’s just simply the most infamous for its anti-LGBTQ crimes.

Homophobia in Jamaica goes unchallenged in that a person can simply speculate about a persons’ sexual orientation or gender identity and then plot to kill him. The intent to murder LGBTQs is unabashedly announced without fear because the police won’t protect them from mob-led murders and violence. As a matter-of-fact, the police incite the country’s homophobic frenzy – by either being present and inactive during these assaults or by following and watching the members of the LGBTQ community.

And in Jamaica, like other anti-LGBTQ friendly countries, homophobic violence drives the HIV/AIDS epidemic.

Here in the U.S. Mandela’s LGBTQ advocacy was for the most part ignored by most black churches and their cadre of homophobic African American ministers who professed to have marched with MLK during the black civil rights era.

In 2013 our first black president, Barak Obama, who like Mandela, modeled and legislated on behalf of LGBTQ civil rights-like DADT, the Matthew Shepard and James Byrd, Jr. Hate Crimes Prevention Act, and the repeal of DOMA, to name a few. But, there is still a huge vocal and visible anti-LGBTQ contingent of black Christian ministers and churches.

For these ministers, some of whom support LGBTQ civil rights but draw the line on same-sex marriage. They say their opposition to same-sex marriage is a prophylactic measure to combat the epidemic of fatherlessness in black families. In scapegoating the LGBTQ community, these clerics intentionally are ignoring the social ills behind black fatherlessness, such as the systematic disenfranchisement of both African-American men and women, high unemployment, high incarceration, and poor education.

irene monroe 12 Mandelas LGBTQ Advocacy Fell on Deaf Ears in Africa and African Diasporic CommunitiesMandela’s LGBTQ advocacy and his impact on the Motherland as well as African diasporic countries and communities across the globe has for the most part fallen on deaf ears.
We all need another Mandela to help us evolve.

But as Obama stated in his eulogy to Madiba “We will never see the likes of Nelson Mandela again.”

This piece first appeared in the LA Progressive, laprogressive.com